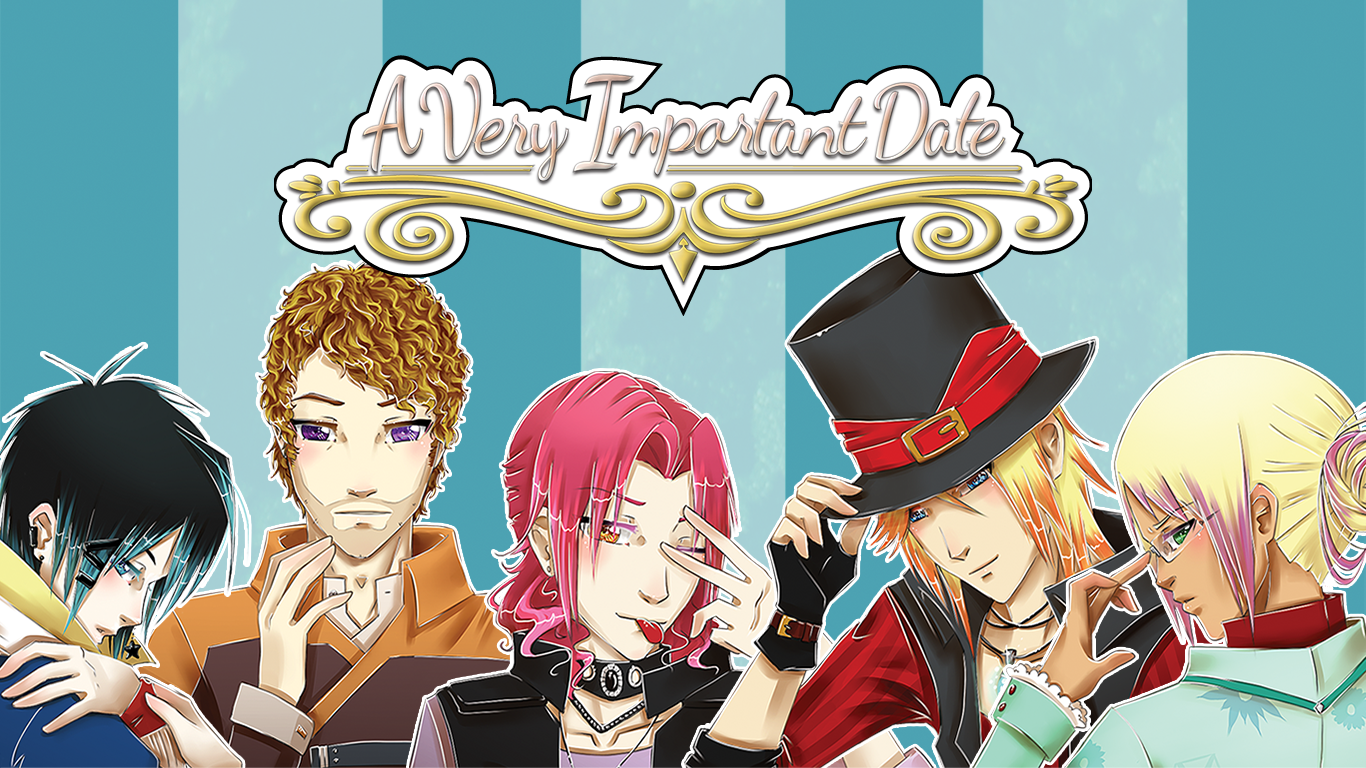 A Very Important Date  is an upcoming Alice in Wonderland themed visual novel from indie developers Naive Sprites.  Upon it’s release the game will be available for Windows, Mac, and Linux. The developers are also working on getting the game greenlit for Steam. The demo covers the Prologue and the first three chapters of Gwyn and Emil’s routes, for a total of 6 chapters total, which amounts to roughly three to four hours of gameplay. So with just a few hours left in the Kickstarter campaign, I decided to bring you all a review of the demo version of the game!

I should stress that this is a loose adaptation, and that while Naive Sprites borrows many elements from Carroll’s iconic story, AVID is a wholly original work that promises to breathe new life into the popular tale.

Alison Sunderlund considers herself to be an average girl from a small Ohio town. By day she can be found working as a server in a local café and by night she takes care of her house and family: her dad and younger brother. Though she doesn’t have a lot on her plate, the life she has gives her very little free time. But Alison’s life changes one night when she decides to play a game before falling asleep, and wakes up the next morning sitting under a tree in a strange new world.

I’m not one to judge a game based solely on appearances, I give every game I play the same level of scrutiny whether they are a big budget commercial release or a free indie game, but I am human, I have biases. So, when I first saw the artwork for Naive Sprite’s upcoming romantic fantasy visual novel, A Very Important Date, I had a bit of a dilemma… On one hand, it’s an Alice in Wonderland themed game, and I am a sucker for anything even remotely related to Alice in Wonderland! However, there was one teeny, tiny thing that stopped me from downloading the demo immediately, and that is the art style used in the promotional video, specifically the updated character designs.

I’m usually not one to let a little thing like art keep me from playing a game, so I went back and looked for some of the original character designs used during the early development of the game for reference. And I must say, I liked those designs a bit more, especially for Harlan and Rory. Stylistically speaking, the newer designs are cleaner, more streamlined and other than my personal opinion, there isn’t anything especially wrong with them. Each sprite is rendered beautifully and I love all of the fantastic details put into each of the guys’s that fits well with each of their various personality traits. But, for some reason, Rory and Harlan’s designs are a huge turn off, I don’t know  what to do about Rory, but for Harlan, I kind of imagine him with longer free flowing waves….

On the flip side, I loved the background artwork! Since the game takes place in Alison’s world and the world of the “dream” Naive Sprites had to create two distinct sets of backgrounds to help differentiate between the two locales. The backgrounds in Alison’s world are a bit darker, and use more natural earthy colors. While the backgrounds for the various locations around Mimsboro, use a wider more vibrant color palette, giving it a more whimsical feel without having to rely on an overtly fantastical setting. There’s a wholesome feel to the game which is only enhanced by the gorgeous settings and light airy soundtrack…

I am so glad that I didn’t let my earlier hang ups about the art style stop me from playing this amazing game! There are a lot of Alice themed otome games on the market from QuinnRose’s Alice in the Country of Hearts to NTT Solmare’s newest title, Lost Alice, there are plenty of options for players looking for their Alice fix, so what sets this game apart from the rest?

Even with all of the cards stacked against it,  A Very Important Date does the impossible and breathes new life into a rather over used premise, this demo had me hooked from the start and that is all thanks to the interesting story and well developed characters. Alison Sunderlund is a wonderful MC, she’s just a down to earth kind of gal who’s an overall  relatable character. She isn’t just a proxy for the player, Alison has her own unique personality and mannerisms, which I found refreshing!

There are five planned love interest for the final release of AVID, however only Gwyn and Emil are given routes in the demo. But, don’t worry, each of the potential love interests get a fair amount of screen time as part of the supporting cast. After playing through the entire demo, I kind of know which guys I like and which ones I don’t… Gwyn and Harlan are my favorites from the demo, especially Gwyn *swoon*, but Rory and Emil are a completely different story.

Rory is shameless flirt, so I never really expected to like him all that much in the first place, and his portrayal in the demo didn’t help his case much. But, Emil is one of the most frustrating characters I’ve had to deal with in a long time… I wanted to punch the guy and the face and put everyone else out of their misery! He is a grade A jerk! Thank goodness, I played his route last, otherwise I don’t think I’d have been able to give this demo my endorsement! But, the saving grace was definitely Gwyn’s route, it was so good! Three chapters was not enough, I need, no I demand more time with that man!

In the end isn’t the first otome game adaptation of Lewis Carroll’s Alice’s Adventures in Wonderland, there have been quite a few over the years. Some have been great and others… not so much, but from what I’ve seen in the demo, AVID appears to be one of the better ones. The writing is fantastic, the character dialogues are witty and fun, without any glaring spelling or grammatical errors, which is always a plus. Now, while this isn’t the first time I’ve played a game like this, Naive Sprites manages to do a fantastic job introducing us to their version of Alice in Wonderland and I can’t wait to see what more they have in store for us in the final version of the game.

There are only a few hours left in the Kickstarter campaign and regardless of what happens with that, I sincerely hope that Naive Sprites continues to work on this game!