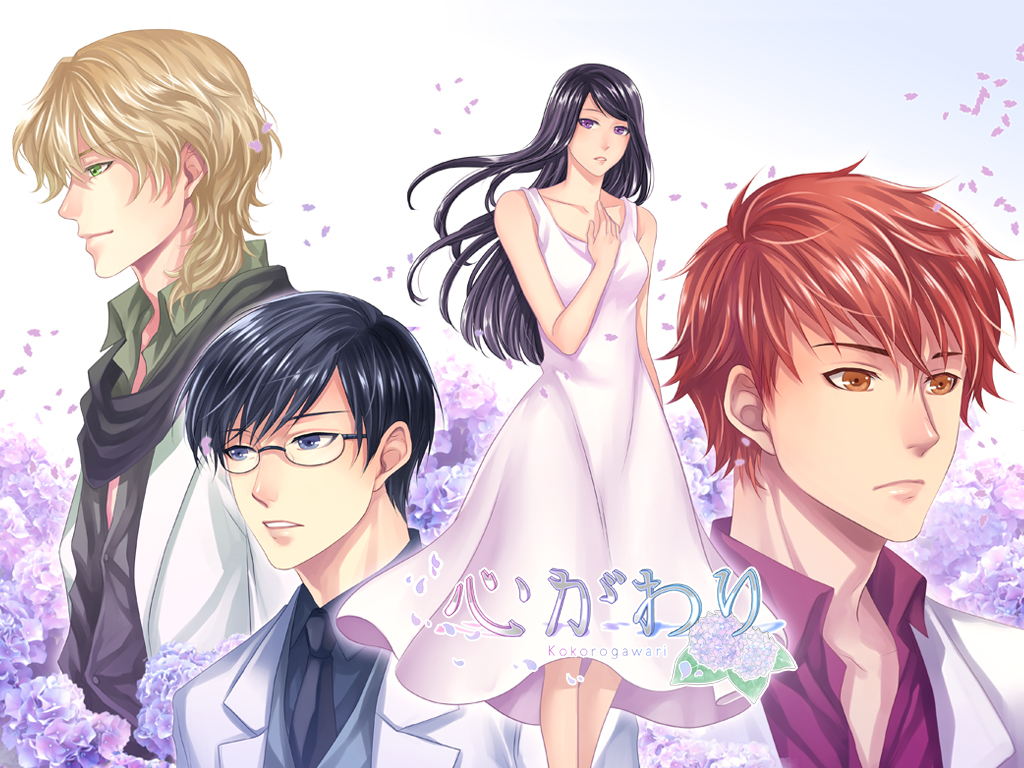 Edit (1/7): The Kickstarter for this game was successful at meeting its funding goal. The final funding amount was $ 8,033 with 143 backers! The game now has a tentative release date of Spring 2017!

Okay, so I’m a day late, but I was experiencing some technical difficulties… *ahem* I am excited to bring you all a very special Kickstarter Campaign for Precatio’s upcoming otome game, Kokorogarwari!

I have been acquainted with one of Precatio’s members, the lovely Laramie Castiel for a while now (she runs an otome blog, Purple Nurple Wonderland), so I’ve been following this game’s progress almost since the beginning! I fell in love with the beautiful artwork, but I stayed for the intriguing premise and character descriptions. This promises to be a fabulous otome game and I can’t wait to get my hands on it when it is released!!

Kokorogawari is a stunning human drama visual novel that captures the complexity of life, while still managing to tell a compelling romance.

A time when the transient flowers slowly shed their petals, spring has come once again, and is a season filled with memories for Matsubayashi Asami who starts her fourth year at university.

Aware of her mother’s struggles during the divorce thirteen years ago, she is determined to graduate smoothly to finally enter the workforce and repay her mother who raised her single-handedly.

But love is unpredictable, and time and time again, her heart is moved. Through these experiences, will her cynical attitude towards love and marriage change for the better or will it break her further…?

What, is forgiveness for her…?

Kokorogawari features an expansive cast of characters that are each connected to the protagonist, Matsubayashi Asami, either through work or school. There is an extensive supporting cast, so for the sake of this post, I will just cover the main love interests and the protagonist…

There are a set of Stretch Goals that will expand the scope of the game if met. Some of the expanded features include extra sprites,partial voice acting during the intro and CGs,  and much more… if you help support one of the Limited Edition tiers, Precatio will create a special Kokorogawari RPG Mini Game!!

Upon it’s release the game will be available for Windows, Mac, and Linux! The tentative release date is set for April 2017! The Campaign Goal is $2,991 and the KS will run until January 7th, 2017!

There are download links for the PC version of the demo, HERE! The demo covers the first chapter of the common route, so if you are still on the fence about the game or just want to see what the game has to offer give it a try.

So PLEASE check out the Kickstarter campaign, HERE, and lend your support. It’s been less than two days and the team has almost reached their funding goal!! So definitely check the campaign out, before it’s too late!!The various price tiers come with some nice goodies so definitely check them out! I already pre-ordered a copy of the game months ago so don’t miss out on this amazing opportunity!!

19 thoughts on “Let’s Show Our Support for Kokorogawari a Dramatic Romance Visual Novel!!”