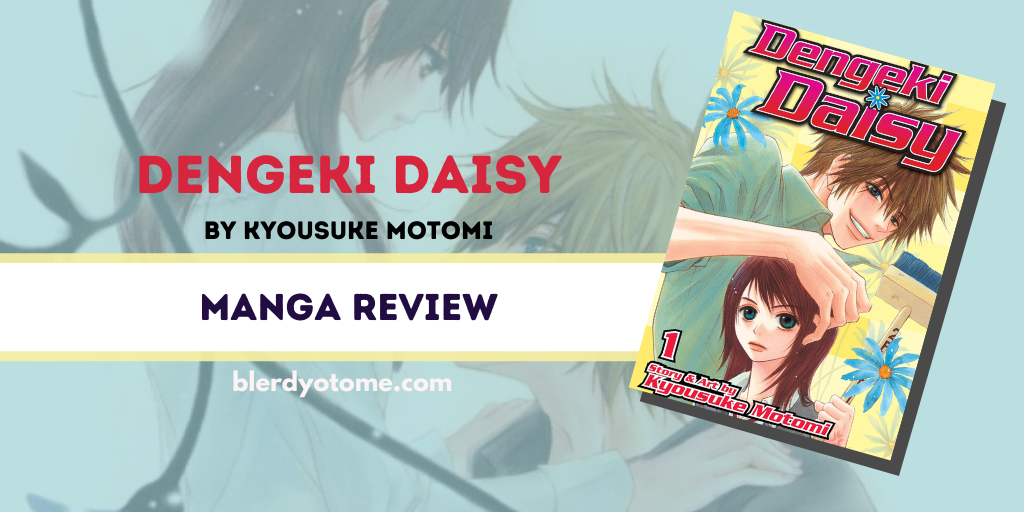 TGIF! Here we are again with another Fangirl Friday! This week I’m covering a manga by one of my absolute favorite mangaka. No, seriously, I have read just about everything by this author, but this is one of my favorites… I’m talking about the shoujo manga Dengeki Daisy by Kyousuke Motomi!

I have been periodically buying all of the volumes for this manga over the years and I’m just missing the last six volumes… That’s how much I love this series, I actually bought it! I don’t waste money on sub-par manga!

*Also, I am not done with this series, SO KEEP THE SPOILERS TO YOURSELVES! I’m serious!*

After orphan Teru Kurebayashi loses her beloved older brother, she finds solace in the messages she exchanges with Daisy, an enigmatic figure who can only be reached through the cell phone her brother left her. Meanwhile, Teru meets and forms a strange friendship with mysterious Tasuku Kurosaki, her school’s janitor. For some reason, Kurosaki always seems to be around whenever Teru needs help which leads Teru to wonder: Could Daisy be a lot closer than she thinks?

As the mystery of Daisy unfolds, Teru also discovers that there may have been a lot more to the life and death of her brother than she ever dreamed . . . and that the man she thought was her friend just might have all the answers.

Dengeki Daisy is a 16 volume romantic comedy shoujo manga series from the fabulous Kyousuke Motomi!! The series was released from 2007 to 2014, and in 2010 the series was licensed by Viz Media for a North American release.

This was my second Motomi series, my first was Beast Master (which I highly recommend reading as well), so I knew this series would be good… So when I saw a few volumes at the Barnes and Noble I used to work at, I immediately handed over my meager paycheck just to add them to my manga collection! It was an impulse buy and one that I’m glad I made, the premise is unique, the characters are fun, and the romance… *clutches chest* perfect!

Now, don’t get me wrong *spoiler alert* it was obvious that Daisy, a mysterious hacker and Teru’s protector/confidant, was the super fine school custodian… he’s on the cover for crying out loud! So it wasn’t a huge surprise when Kurosaki was unmasked, the real mystery of the series are all of the secrets surrounding Teru’s late brother.

Before his untimely death Teru’s bro, Souichirou, was a talented computer engineer working on a secret program that would have revolutionized the field. Now, I’m not finished so don’t spoil it for me, but most folks thought all of the data on the project was lost when Souichirou died, but select few believe that he actually finished the project in secret… So they spend most of the series targeting Teru, believing that her brother hid the data for the program in her cell phone, the only thing he left her. The search for the truth about Teru’s brother and his program serves as the overarching plot of the series, but in traditional Motomi-sensei fashion, Dengeki Daisy has it’s fair share of heartwarming rom-com moments.

The romance between Kurosaki and Teru develops pretty realistically, given the circumstances. As a couple, they compliment each other well, each making up for the other’s shortcomings, plus their, bickering is hilarious!! But, I really like that Teru falls in love with Kurosaki before  she finds out he’s Daisy, which really added more substance to their romance outside of the Daisy correspondence. Also the supporting cast in this manga is phenomenal, I found myself falling for each and every one of them, whether they were a part of the supporting cast or the main cast! The story is compelling and the art is gorgeous…