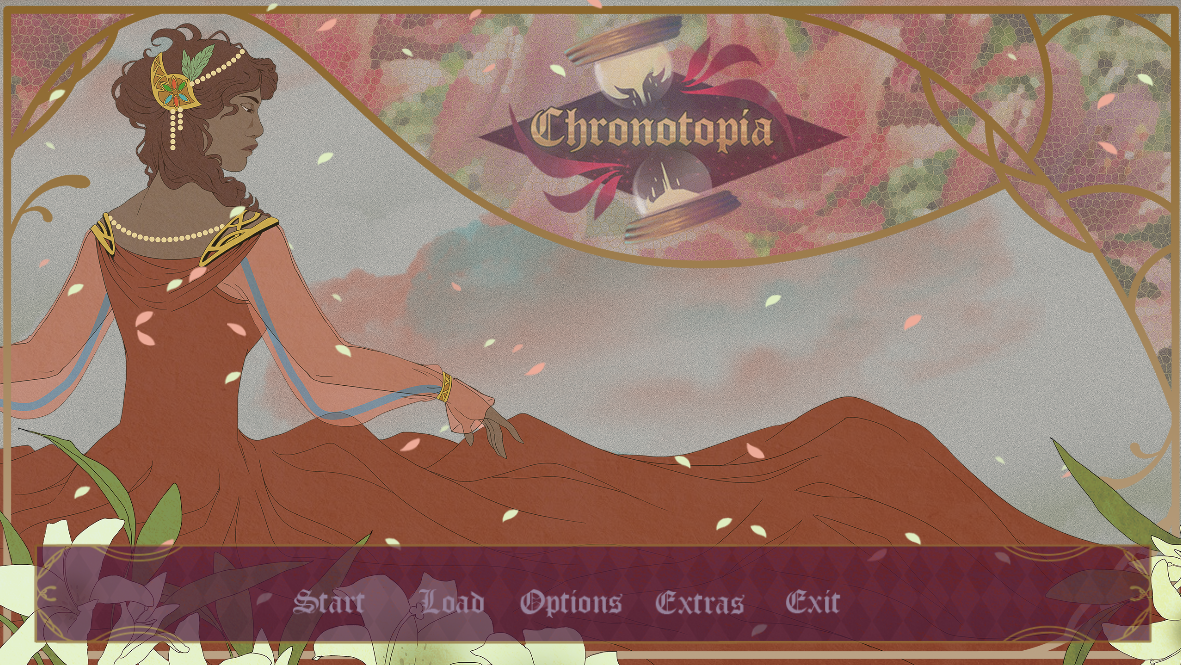 Chronotopia  is an upcoming commercial visual novel from French developers Träumendes Mädchen. The game features aspects of both visual novels and point-and-click games and borrows elements from the French fairytale, Donkeyskin by Charles Perrault. Upon it’s release the game will be available for Windows, Mac, and Linux in both English and French. The developers are also working on getting the game greenlit for Steam.

“The young Donkeyskin lives a peaceful existence in her castle, enjoying her days with her best friend and confidant, Nahima. That is until her father, gone mad since the death of his beloved, decides he should wed the princess instead. Donkeyskin has to find a way to escape from this fate, but how? She doesn’t know it yet, but it’s the beginning of a long nightmare that will take her to the edge of madness…”

Initially the game is split between two separate, but interconnected narratives; that of a wayward spirit in purgatory and that of Princess Kionna from the Donkeyskin fairytale.

In the opening scenes the player takes on the role of a newly awakened spirit, called a Shadow, in purgatory. While there the player learns that Shadows must collect their lost memories with the help of a wise woman named, Lys, in order to be reborn into a new life. If a Shadow fails to collect the memories necessary to put their past lives behind them, they will be doomed to spend the rest of eternity in purgatory as a listless shadow. So it is up to Lys insure that this fate does not befall newborn spirits through the use of Mnemotherapy, a process that uses immersive thematic stories (fairytales) to help trigger a spirits latent memories.

From there the narrative shifts to that of the Donkeyskin fairytale and the player views the events from the perspective of the Princess Kionna and her retainer, Nahima. Prior to this game, I’d never heard of the Donkeyskin story, so this was completely new territory for me. However I found the dark themes compelling and extremely enjoyable, but be warned the story deals with some rather unsettling themes such as death, the afterlife, and incest among other things. The central conflict arises when Kionna’s father announces his plan to wed his daughter following his beloved wife’s death. With no other way out of the unsavory situation the princess enlists the aid of a fairy, but the deal comes with some serious consequences that will determine the fate of the entire kingdom. 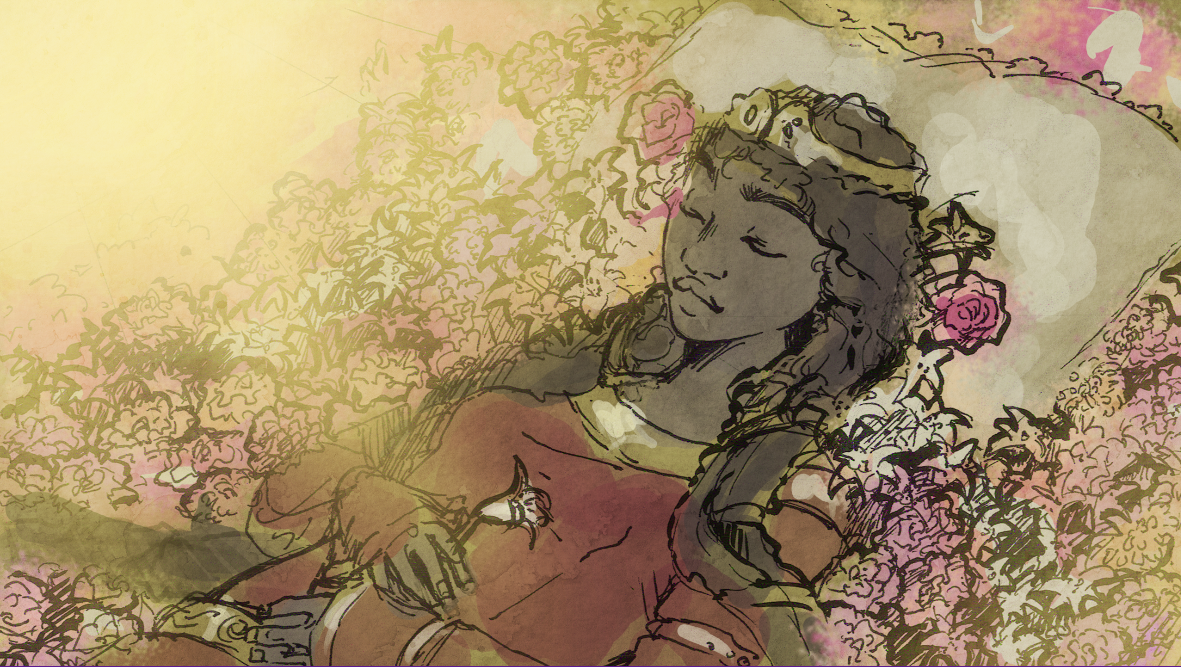 I was extremely impressed by the level of detail the developers put  into the overall story concept, they manage to weave a multi-faceted and unique tale while still managing to incorporate the established elements of the Donkeyskin story. This is an engrossing story that manages to entice the reader with it’s impressive themes and captivating writing. I really felt like I was reading a novel, with each click of the mouse the player is transported deeper into the fantastical world of the game and I for one can’t wait to see what happens next!

Unfortunately we aren’t given much background about the unnamed Shadow and Lys, outside of the vague existential exposition in the opening, but I still feel like their existence in the game is crucial to  overall plot progression. I’d be disappointed if they were just one off stand ins for the player, but I feel like the writers will involve them more in the completed version of the game. So other than introducing some interesting themes about death and the afterlife, I can’t really say much about them. However, the characters from the Donkeyskin story were a bit more fleshed out, as the majority of the demo’s plot centers around that narrative.

I fell in love with the characters in this portion of the game, from the mad king to Nahima to Princess Kionna, each character is presented beautifully throughout! I was enamored with their wonderfully written dialogues and mannerisms, and at times I even forgot that I was playing a game. The characters are just so vibrant and relatable, that I couldn’t help but get invested in their individual stories. The writers did an excellent job of introducing us to not only the characters, but their relationships with one another and how those relationships shape the overall story. These are not one dimensional characters, they each have lives and motivations that help drive their onscreen interactions which adds a realistic element to the story!

But, what really makes this game for me is the inclusion of people of color (POCs) in prominent roles in the game. As a woman of color, I can’t tell you how great it is to see a diverse cast of characters, especially characters that look just like me, from the curl of their hair to the color of their skin, it does my heart good to see so much melanin being represented in one place! I also want to applaud the writers for including some subtle nods to a potential romantic relationship between Kionna and Nahima. Now, I’m not sure if Kionna reciprocates Nahima’s feelings in a romantic way, but their closeness definitely leaves the possibility open for exploration in the final release of the game.

Okay, so I was blown away by all of the artistic details included in this demo, I mean… wow!

The art in this game has a realistic style that reminds me a bit of the style used in MoaCube’s fairytale themed game Cinders and it definitely lends itself well to the fairytale theme of the game. The character sprites are clean and their designs are on point, from their period specific wardrobes and hairstyles to their various facial expressions and poses, every stylistic choice was beautifully rendered. The backgrounds are beautiful and really do an fabulous job of setting the overall mood for the game. I especially loved that the developers added moving elements to each scene, as it really helped bring the game to life along with the sensational soundtrack. 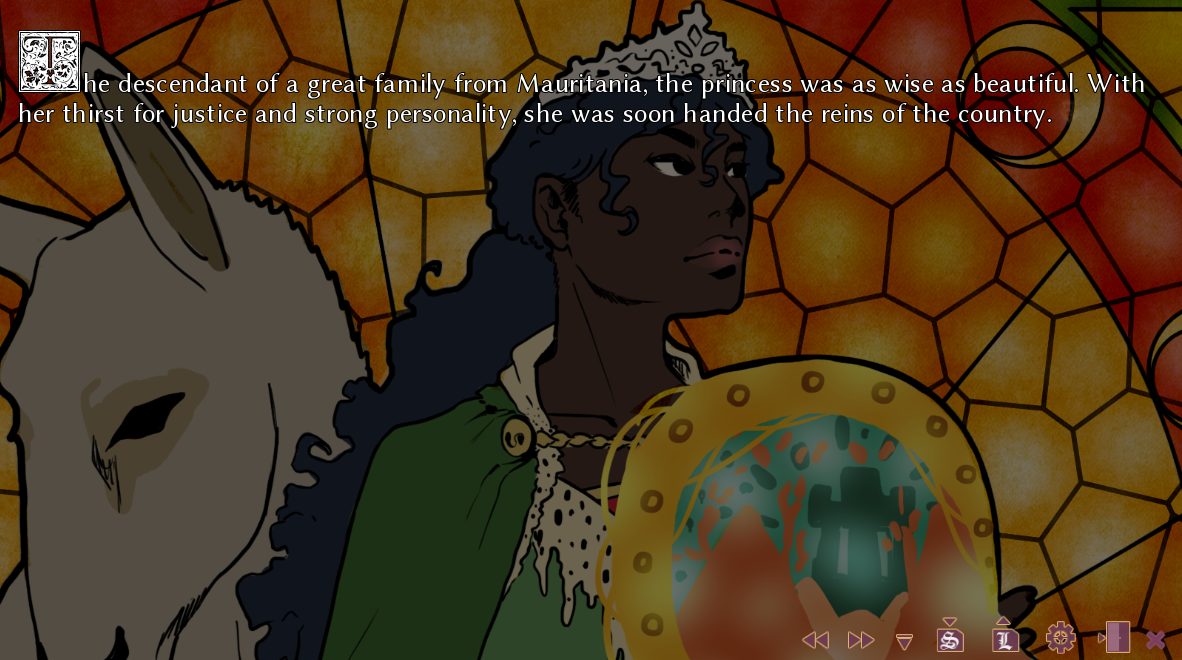 In addition to the traditional visual novel elements of the game, the developers also incorporated some aspects of kinetic novels and point and click games into the demo. I loved the novel style used during the opening scenes and during the introduction of the Donkeyskin story, it was reminiscent of the older Disney classics, especially when coupled with the beautiful stain glass window background CGs.

Then there was the use of the Renpy 3D camera, while I liked it during the visual novel segments, I really feel like it was best utilized during the point and click exploration segments. It added a unique interactive element to the story that I found refreshing considering the typically text heavy elements of these types of games.

This is a phenomenal demo that does a spectacular job of showcasing what promises to be a unique gaming experience. I’m not going to lie, I’m a sucker for fairytales and fairytale retellings, but there is something special about Chronotopia that sets it apart from the rest! With a dynamic and diverse cast, and a wickedly captivating plot, this game is sure to be a commercial success for Träumendes Mädchen.

If this demo is any indication of the quality we should expect in the final game, I for one can’t wait to get my hands on it!  If you haven’t already, go check out the Kickstarter campaign and show your support! If you still need some more convincing, download the demo for yourself, HERE and give this amazing game a try!