I’m Kat from GrimmGirl and I’m really excited that I get to work with Pokeninja90 for this Haikyu collaboration series. I’m a huge Haikyu fan and it didn’t take me long to convince Pokeninja90 to start watching the series as well. I’m happy to say she loved it as well and thus our collaboration idea came about!

I also would like to warn anyone who has yet to see the show that all of these moments will contain spoilers. If you are interested in reading a spoiler free post in order to see if this is a show you would like to try watching then please check out Pokeninja90’s reaction post Fangirl Moment: Haikyu!! or my season one review Haikyu!! You Are My New Obsession…

Everyone else please sit back and enjoy reading my Top Three Hiakyu Moments of Season One!

Three: Asahi VS The Iron Wall 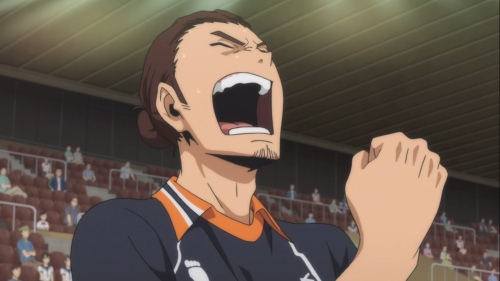 As you all (if you’ve seen the show) remember Asahi originally gave up playing volleyball after being hopelessly shut out by Date Tech’s infamous Iron Wall. Nothing can be more depressing to an Ace Spiker than to have you hits constantly blocked and sent back to your face. Asahi felt responsible for his team’s loss and at one point felt like his playing would only hold everyone back.

The loss was hard on everyone but Asahi and Noya took it particularly rough. Noya was angry with Asahi for forgetting that he was not the only one on the team and that by giving up on a ball that he was able to keep in play it felt like a betrayal. Asahi is finally able to come back to the team but he feels guilty over his previous weakness and afraid that their game against Date Tech will result in the same outcome with him being ruthlessly blocked.

At first it seems as if Asahi still won’t be able to get through but with the support of his teammates Asahi finally pushes through. Not only does he break through the Iron Wall but he does it on his terms. He calls for a toss and is able to make the game winning point after being blocked and having Noya keep the ball in play.

Not only is this moment great because it is a moment of redemption for Asahi and the rest of the second and third years, it also is an amazing moment for Kageyama. I don’t know if anyone else caught this but the fact that Kageyama set the ball for Asahi even though Asahi kept getting blocked shows incredible growth on Kageyama’s part.

This was a crucial moment in the game and the old Kageyama never would’ve trusted Asahi enough at this point to toss it to him. On top of that Kageyama intestinally adjusts his toss to Asahi’s preferred toss, something else that middle school Kageyama would never have done.

Finally I feel like this was the moment that point Karasuno on the map in the eyes of the other competitors. Date Tech was a powerhouse school so the fact that they were able to take the win was a big deal. I feel like it marks the beginning of their crusade to end their fallen champs image.

Two: Hinata and Kageyama Let It All Out 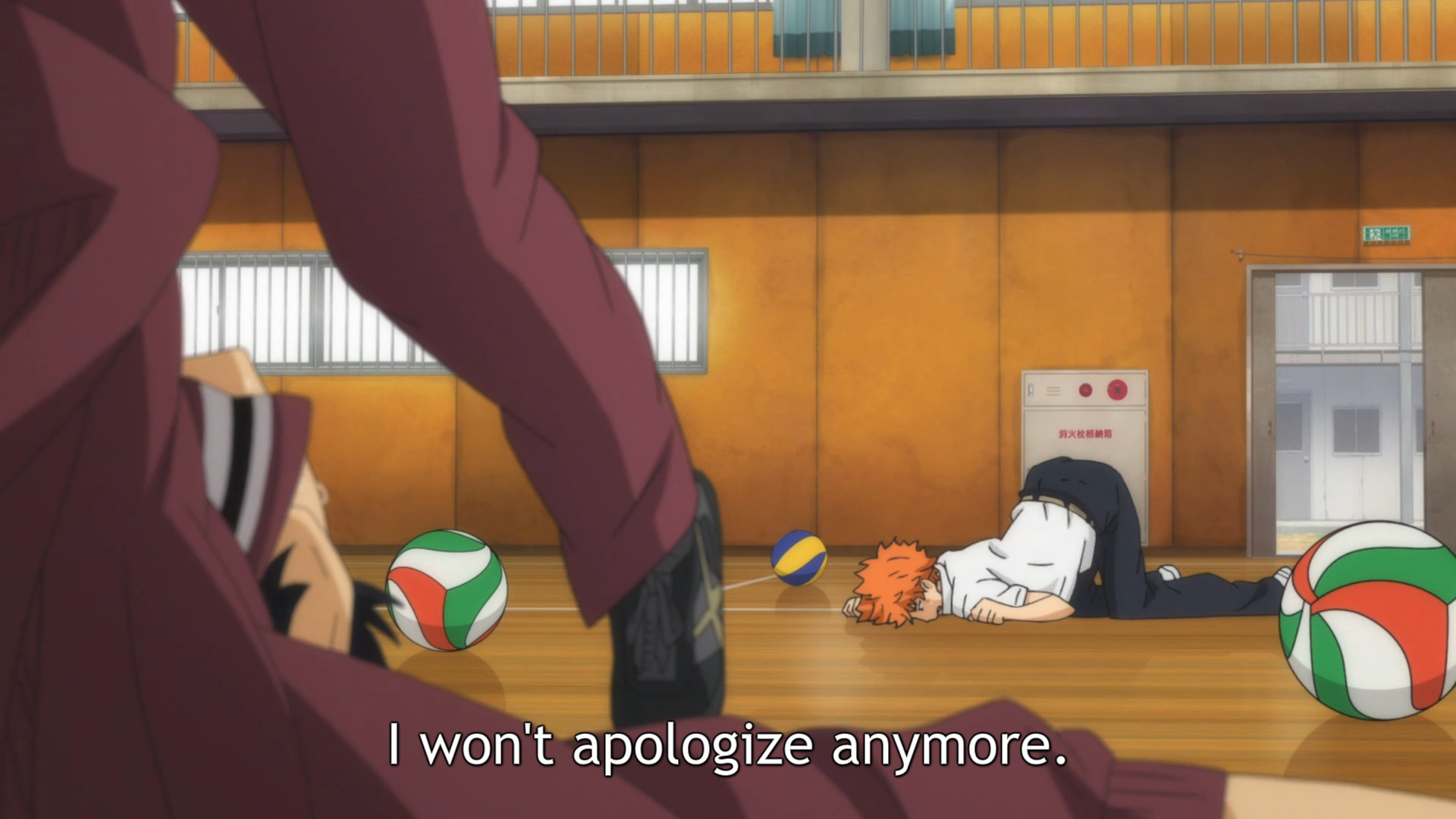 This second moment may sound like an odd choice but here me out! My second favorite moment has to when Hinata and Kageyama are in the gym after their loss to Aoba Josai High. They’re both frustrated, angry, and yet they can’t seem to find away to express that to each other or themselves.

That is until Hinata points out that the finals are still going on and that other teams are playing. Other teams who have won get to stay while their left out. It’s in this moment (my favorite moment) when Hinata snaps. He shouts, “Goddamnit!” and starts chucking volleyballs, screaming, and running around the gym. That’s when something strange happens. Our cool, calm, and collected Kageyama starts to do… exactly the same thing.

They both take a moment to completely break down. The scream, shout, and just let everything they’ve been holding onto after their loss burst out of them. After throwing which in essence is a tantrum they both come to a realization that it’s time for them to get back at it. They’ll never win just feeling sorry for themselves, they need to figure out what went wrong and improve.

I love this moment for two reasons. One I feel like it’s very realistic. When you compete at this level and lose you’re not going to simply shake it off right away. You’re going to be angry and upset. It’s going to affect you because you put everything into it. It sucks to put everything into something and still not be good enough.

The second reason I love this moment is because both boys get back up. No matter how good you are there is always going to be a moment when you lose. How you react to that is what defines you as a competitor. After wallowing for a bit both Hinata and Kageyama make a point to get back up and to work to improve themselves.

Sitting around and being mad isn’t going to change the fact that they lost. Practicing and working on the things that led to their loss however could prevent them from losing again. This moment made me so pumped for season two! I couldn’t wait for them to get back to practice. 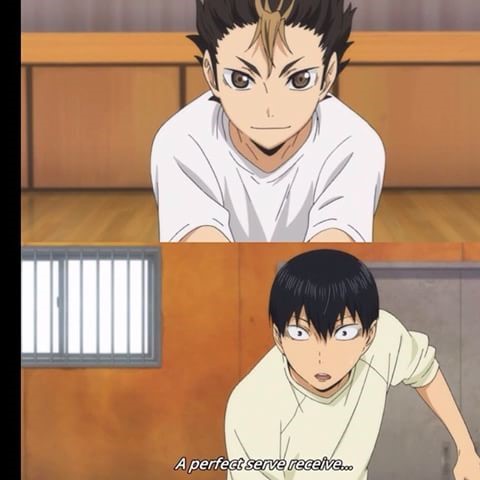 If you know me at all this next moment shouldn’t surprise you in the least.  I have a SANE obsession with Karasuno’s number one libero Yu Nishinoya. This obsession goes back to the very first moment he waltzed onto the screen and I found it just as awesome the second time watching this series.

Noya doesn’t start out on the show; he actually makes his first appearance at the end of episode seven. Up until then we only hear brief mentions of Noya from the other players. Daichi claims Noya is the volleyball team’s Guardian Deity while Tanaka explains that Noya use to be the team’s only volleyball genius until Kageyama showed up.

When Kageyama and Hinata ask why he hasn’t been there if he’s so good they learn that he was serving a week suspension from school and a month long ban from club activities. After hearing that we really have no idea what to expect although Kageyama secretly feels that Noya must be some sort of thug.

Later as Kageyama is practicing his serves Noya walks into the gym, sees Kageyama serving and within seconds is across the gym where he effortlessly hits Kageyama’s serve right to where the setter would normally be positioned. As Kageyama looks on in surprise Noya simply tosses his jacket over his shoulder as if the whole thing was nothing. Which for Noya, it was.

Obviously I love this moment because it’s the first time we see Noya but there’s more to it then that. In my opinion Noya’s presence brings a sort of force to the team. Even when I first watched this during this moment I knew exactly what Daichi meant by Noya being their Guardian Deity. The moment Noya comes into the gym I couldn’t help but feel like the team was coming together. With the presence of Noya comes Asahi so my hunch was totally right!

I hoped you enjoyed my favorite season one Haikyu moments. Make sure to let Pokeninja90 and myself know what your favorite Haikyu moments were in the comment section below.

I Do NOT Own These Images