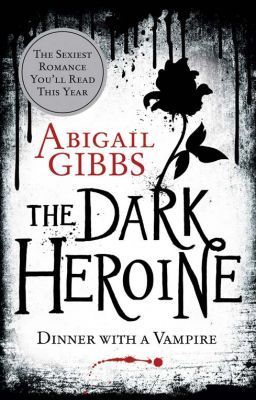 TGIF! Here we are again with another Fangirl Friday, and this week I’m covering the first book in the Dark Heroine Series, Dinner with a Vampire by Abigail Gibbs!

I don’t know if I mentioned this, but I used to work at a Barnes and Noble when I was an undergrad, sure I only worked in the cafe, but even that gave me access to some sweet discounts on books (and Starbucks drinks). But, the real perk, the one that made my two years there worthwhile, was the access to Advanced Reader Copies (ARCs) of upcoming books!

There were tons of them from various authors and genres, and they were all F-R-E-E! Every other day there would be a fresh stack of titles in the break room and if I got there early enough, I had my pick of the litter! I read so many awesome books working there, but one that really stuck out was a dark supernatural romance YA novel. I picked it up on a whim, briefly skimmed the summary on the back and after judging it mildly interesting, I  tossed it into my employee locker. It wasn’t until a few weeks later that I actually read the book, but when I did I was hooked!

The author Abigail Gibbs originally posted the book as a serial on Wattpad under the username, Canse12 at the age of 15. After 3 years of updates, the work was discovered by a publisher and the rest is history. As of this writing she has already completed two books in the series, with plans for more in the future. Mind you, she does this all while attending the University of Oxford, which is impressive for someone so young!

One moment can change your life forever…

For Violet Lee, a chance encounter on a darkened street draws her into a world beyond her wildest imaginings, a timeless place of vast elegance and immeasurable wealth – of beautiful mansions and lavish parties – where a decadent group of friends live for pleasure alone. A place from which there is no escape…no matter how hard Violet tries.

Yet all the riches in the world can’t mask the darkness that lies beneath the gilded surface, embodied in the charismatic but dangerous Kaspar Varn.

The book follows an average teen, who’s life takes a dangerous turn when a night of partying takes a bloody turn. While making her way home from a night out on the town, Violet witnesses several men being massacred. Horrified by the sight she attempts to escape, but before she can get far she is captured by the perpetrators of the crime, a vampire named Kaspar and his crew. But, if you are expecting a sweet vampire/human romance like that of the Twilight series, this is not the book for you. While captive, Violet is subjected to the whims of her captors, who are anything but friendly…

I found myself captivated by the twisted, romance between Violet and Kaspar, simply because it wasn’t all sunshine and roses. It’s dark, it’s dirty, and I loved every minute of it! Vampires aren’t supposed to be sweet, so it was refreshing to read a vampire story that didn’t lighten them up. Kaspar isn’t an altruistic white knight, and he doesn’t become one either… Kaspar is a jerk from start to finish and he doesn’t hide it, in fact he embraces it! Then there’s Violet, she isn’t some love struck doe-eyed heroine, she’s a fighter! Add magic and prophecies to the mix and you have an interesting read that will have you turning pages late into the night!

This book makes Twilight look like child’s play! I highly recommend giving this book a read if you have the chance, you won’t be disappointed! Dinner with a Vampire is dark and sexy, exactly what you’d expect from a vampire romance!

Do you have any suggestions for Fangirl Moment post? Any burning questions? Want me to review a specific book, film, anime, manga, show, or webcomic? Feel free to Comment on this post or Ask Me on my tumblr!  As always Thank You for reading!

6 thoughts on “Fangirl Moment: The Dark Heroine- Dinner With a Vampire”