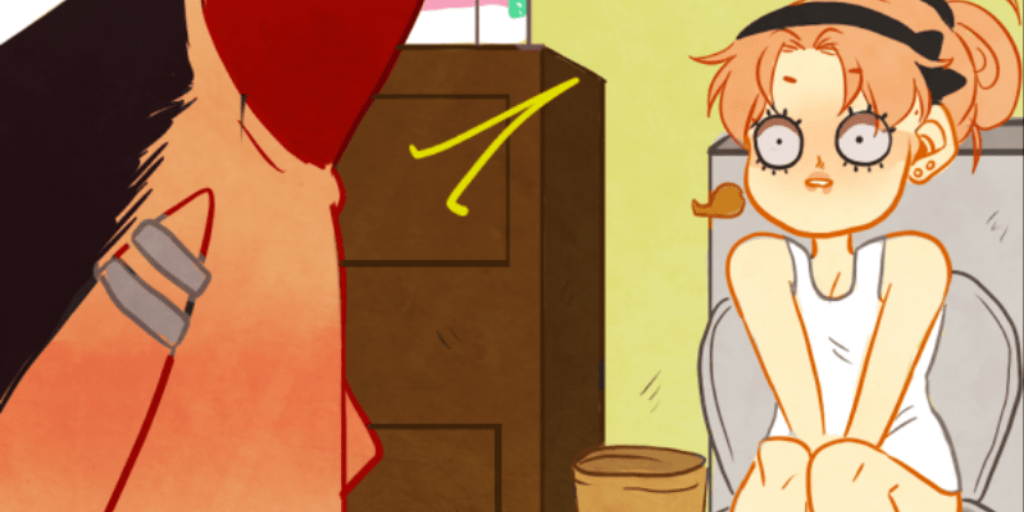 TGIF! Here we are again with another Fangirl Friday! This week I am covering another webcomic that I stumbled upon during my recent internet travels called Satan and Me. So first, before you guys go running for the hills just from the title…. hear me out okay! So I was browsing a friend’s Tumblr page when I came across this post:

Yeah, soak that in for a bit… hilarious right, ladies, we’ve all wondered about those stupid designs manufacturers put on sanitary napkins. I mean come on they are essentially useless, so why bother even putting them on there in the first place? Beats me…well after laughing at the original post I scrolled down to read the reblog comments, and I’m glad I did because this thing just got 10x better. Upon closer inspection I saw that another Tumblr user, Orange Plum, took the idea and ran with it… the result, a hilariously addictive webcomic!

**I don’t own the images, they are the work of Orangeplum, the comic can be found on Tumblr and on Tapastic.**

Satan and Me is an ongoing 2014 webcomic series created by Tumblr user, Orangeplum. In the comic, there was a mix up at the maxi pad factory, and instead of the usual flowery designs, a box of pads is accidentally emblazoned with symbols for a demonic ritual. Unaware of the mix up, a young girl, Natalie finds herself in a sticky situation, when her period blood accidentally summons Satan himself. He informs her that they are now bound to one another until such time as Natalie decides to release him. What happens when the Devil is stuck satisfying the whims of a teenage girl? Hilarity, that’s what!

At first the series covers the day to day lives of Natalie and Satan as they adjust to their new living situation. We see Natalie and Satan interact in a cute back and forth that constantly shifts between that of a master/servant to that of siblings. I don’t know which is more hilarious, the fact that Satan is is forced to do the bidding of a teenage girl or the fact that said teenage girl is unfazed by the fact that she is made a blood contract with the Devil himself. In fact Natalie treats Satan like a rambunctious little boy, much to Satan’s dismay. Despite some small disagreements early on, over the course of the story we really see Natalie and Satan develop a mutual respect for one another. As if to mirror the changes in their relationship, the plot takes on a much more serious tone, most notably with the introduction of archangel Michael and the rest of Satan’s celestial family.

The transition from comedy to drama was gradual, and was done in such a way that you don’t even realize what’s happening. The transition just seems like the most natural next step for the characters of the comic, I mean comedy can really only take you so far. By developing the plot beyond the initial premise, the author adds depth to the story and the characters themselves. The cast of characters in Satan and Me, while expansive all have their own story to tell outside of the main narrative of the comic. Sure, Nathan and Satan are the main characters of the story, but they aren’t the ONLY story that the author tells. Each character gets a chance to tell their story, something that adds significantly more substance to the overall story.

The unique premise and comedy got me in the door, but it was the compelling story and animated artwork that kept me turning the next page! This is a fun read and I highly recommend giving this comic a read if you have the chance.

6 thoughts on “Fangirl Moment: Satan and Me”