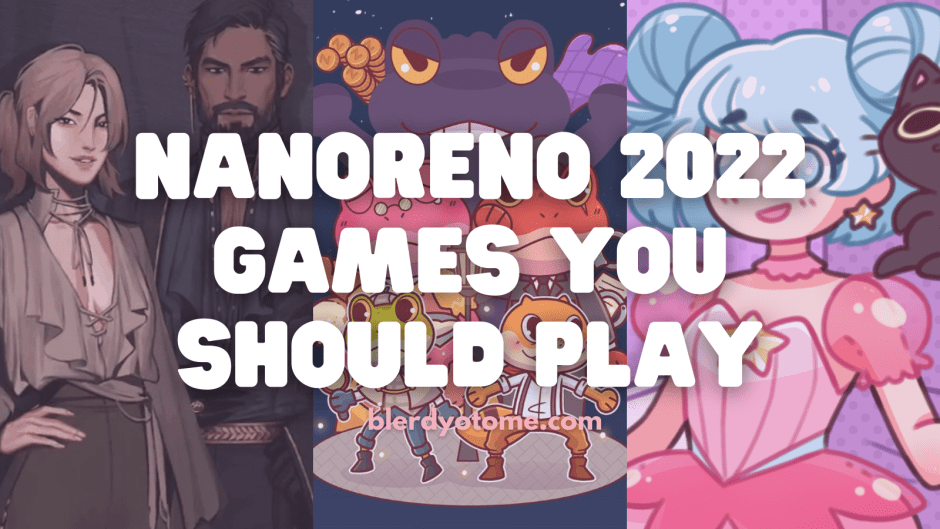 Hey Blerdy Tribe, NaNoRenO 2022 has come and gone and this year there were a total of 185 submissions! For those of you not familiar with NaNoRenO, its an annual month-long game jam held from early March to early April, in which developers are challenged to make a visual novel from start to finish. Each year newbie and veteran devs alike put their skills to the test to create their own unique projects–and over the years I have seen some phenomenal games come out of the jam! There are a ton of phenomenal games to play, and I definitely recommend searching through them all when you have the chance–but for today’s post I’ve compiled a list of the games that caught my eye from among the NaNoRenO 2022 submissions!

In a town full of sentient animals, help Detective Gidget solve the crime of the mysterious thief plaguing Hoppity Town in this cute point & click adventure. Investigate the case, chat with locals around town, and search for clues and collect evidence to help you get to the bottom of the case!

Who doesn’t love a funny quirky retelling of a famous Greek myth…with ducks?! Pre-Odyssey is a hilariously cute story that follows the budding relationship between Odysseus, King of Ithica and the timid princess, Penelope and her gaggle of duck friends.

Exiled in a castle at the mercy of a bored vampire, will you escape him or will you fall for him? Step into the shoes of sarcastic bard, Abigail as she uses her quick wit to survive her time alone with the handsome vampire, Lucius. One misstep could mean her death, but if she manages to befriend her unusual host, she may just find they have much more in common than she imagined.

Take another trip down the rabbit hole with Alice in this Sapphic retelling of the Lewis Caroll classic. Follow a cute rabbit-eared girl into a whole new world full of cute girls, anthropomorphic animals, and adventure!

This next pick brings some great southeast Asia representation, set within the Filippinas archipelago, Jester Under Pressure follows a court jester whose sole job is to entertain Queen Bahaghari, a royal with a penchant for malicious magic. Should they fail, they may just lose their head!

Spend your days near the shore in the company of a handsome stranger named Kessian. Your choices will determine how your relationship progresses. Do you hear that voice that calls out to your heart?  Will you listen to the voice, or ignore it?

This one reminds me a bit of Makoto Isshiki’s Piano no Mori, telling a sweet story between a young boy and his piano instructor. Follow Alen Roussel, a pianist as he reignites his love of music while tutoring Emile, an energetic young man who has always admired him. The game mostly focuses on the friendship between Alen and Emile, but there is some slight romance as well.

By Two and a Half Studios | Boys Love Mystery

You wake in an unfamiliar location surrounded by complete strangers and you only have two hours to escape! Take on the role of Sebastian in this mystery BL adventure, uncover the truth behind your strange circumstances, no matter the cost!

They say your drink of choice can tell someone a lot about you. It turns out that for MC that’s literal. In the vein of Coffee Time, players can experience a short casual encounter between two strangers sharing a drink at a bar.

A Day in the Life

Experience the highs and lows of life through the eyes of Isola Bedford, a video game addicted, foul-mouthed girl living in the not-so-normal city of Riva. With the help of her therapist, take a dive into Isola’s mind and explore the feelings and emotions buried within. This game serves as a prequel to Meanwhile in Riva.

You’d think fighting monsters and taking down the forces of evil everyday would be daunting work, but they’re nothing to a crime fighting magical girl like Bubble. Saving the planet is just business as usual, but Bubble is about to tackle her toughest challenge yet: helping apathetic high schooler, Momo, graduate?! Only time will tell if she’s really up for the task in this cute, funny, and emotional yuri visual novel.

2 thoughts on “Nanoreno 2022 Games You Should Play”