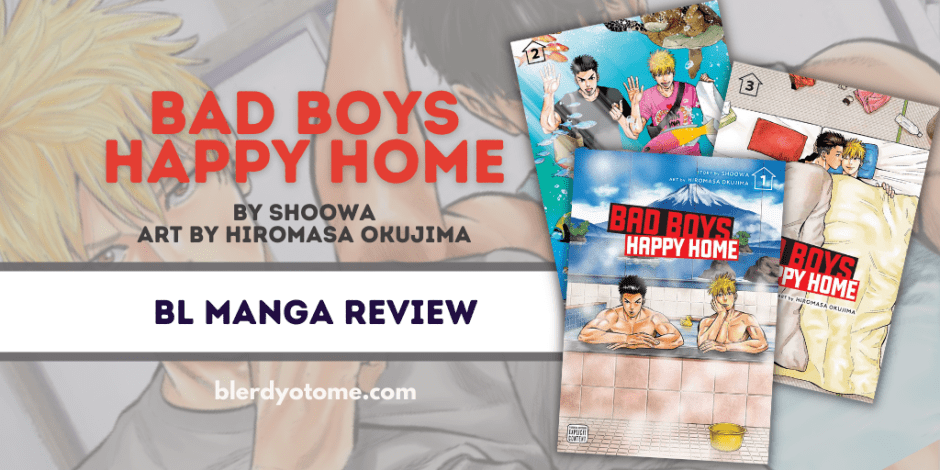 Bad Boys Happy Home is a slice-of-life boys love manga series by Shoowa with art by shounen artist, Hiromasa Okujima and published in English by SuBLime Manga. High school “bad boy” Akamatsu likes to blow off steam by sparring with Seven, a homeless guy living in a nearby park. But when Seven finds himself without a place to sleep, Akamatsu opens his home to the stranger. Two hot blooded men under one roof?! What’s the worse that can happen?

Life sucks, and high school bad boy Akamatsu needs an outlet for his pent-up frustrations. Seven, a homeless guy living in a nearby park, is just the outlet Akamatsu is looking for. Soon, he finds himself heading to the park every day just to pick a fight, even though he never wins. So when Seven ends up kicked out of his favorite sleeping spot, Akamatsu decides there’s only one possible solution to retain his fighting partner—invite Seven home to live with him!

SuBLime has been delivering on so much boys love goodness, releasing a variety of titles that I probably never would have discovered on my own–they brought us, Dick Fight Island and MADK and my life has never been the same. So, when SuBLime announced Bad Boys Happy Home, I was eager to see what new gem the publisher was about to bless my life with and this series did not disappoint! I fell in love with this series, devouring every new volume like it was my last meal and just yesterday the final volume of the series dropped and y’all I HAVE SO MANY FEELINGS!

In Bad Boys Happy Home, self proclaimed bad boy, Akamatsu is on the outs with his parents and living on his own in a small apartment. Full of pent up teen angst, Akamatsu is itching to let off some steam, and like any healthy hot-blooded dude he finds relief for his woes by trading blows with Seven, a homeless guy who lives in a nearby park. Seven is his ultimate sparring partner, no matter how many times Akamatsu challenges him to a fight he never seems to be able to get one over on the guy.

Despite this Akamatsu starts to really look forward to their fights and finds himself practically skipping to the park everyday to challenge Seven–and they even sort of strike up a sort of friendship(?). That is until Seven loses his sleeping spot at the park. Not wanting to lose his sparring partner, Akamatsu invites Seven to crash at his place until he can get on his feet. What follows is the most wholesome cohabitation story I have ever had the pleasure of reading–two hot-blooded delinquents living in domestic bliss, learning about each other and falling in love!

The chemistry in this series is amazing! Usually boys love series are quick to push two dudes into a (physical) relationship, but in Bad Boys Happy Home it takes its time building up the relationship between Akamatsu and Seven. What starts as a mutual respect for each other’s fighting capabilities quickly develops into a genuine friendship with the pair trading fun banter instead of blows. Hitting up the local grocery store for sales or sitting down for meals and talking about their respective days becomes the norm for this pair of “delinquents” and I found myself really looking forward to the sweet intimate every day goings on of their lives.

Of course this is a boys love so romance isn’t far behind, but even when Akamatsu and Seven do become lovers they never stop being friends and a lot of their romantic moments are filled with just as much comedy and laughter as you’d expect from two best bros who also happen to be falling in love with each other. Akamatsu isn’t the most experienced with love and is still exploring his sexuality and I love that Seven is respectful of his boundaries, never pressuring Akamatsu into anything he isn’t ready for–the consent in this series gives me life!

Their physical intimacy is something that is built up over the span of the series (the pair don’t have their first kiss until volume 2), but I find the slow burn definitely makes it so much more rewarding when Akamatsu and Seven eventually do the deed! The series is censored, so instead of seeing everything, we’re treated to heavenly glowing peen outlines, but I wasn’t too thrown off by that. Speaking of art, Bad Boys Happy Home is drawn by shounen artist, Hiromasa Okujima which gives it such a fun distinctive look that is perfect for a romance between two “delinquents”. I think more BL should be drawn by shounen artists… just sayin’.

Bad Boys Happy Home is largely a lighthearted series, but it does dip its toes into the drama pool ever now and again, namely when it comes to Seven’s past–which is more than a little heartbreaking. Seven reveals bits and pieces about himself and it is very clear that he’s had a hard life, but in spite of the trauma he’s endured he still manages to be hopeful that he can live a normal happy life. Akamatsu is pretty much an open book and while his life is not as traumatic as Seven’s does come with it’s fair share of sad moments, especially in regards to his reasons for leaving home (which I won’t spoil for you here). But, despite everything they’ve been through Akamatsu and Seven find comfort and acceptance in one another.

Sometimes all it takes is a fistfight to find true love.

Bad Boys Happy Home isn’t without its shortcomings–the latter two volumes hit hard with Seven’s traumatic past and it’s very much at odds with the general lighthearted tone of the first half of the series. But, overall, I LOVE this series and I think it deserves a spot in your manga library! Bad Boys Happy Home is a wholesome story about two delinquents living together, becoming friends, and falling in love.