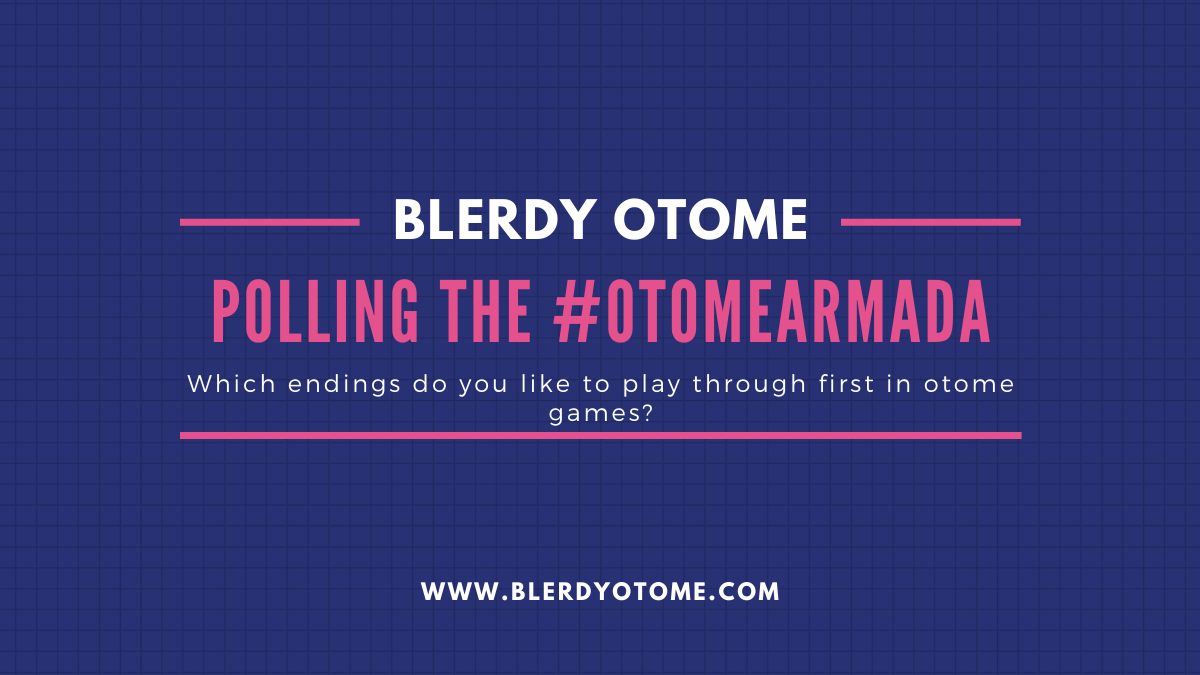 It’s no secret that otome games are still very niche genre within the broader gaming community. Even with an increase in English localizations of Japanese otome games here in the West, our community is fairly small–but, what we lack in size we more than make up for in voice! As a collective, the online otome fandom has been especially vocal when it comes to protecting our otome games–whether that is calling out localization companies on the quality of their releases or letting companies know what games we WANT to see released in the West– you can bet that the collective voice of the otome community will be heard.

As a blogger I use my platform to promote otome games (and indie romance visual novels), but I am just one of many voices in the otome games community and I don’t speak for everyone. So, I wanted to reach out to the #OtomeArmada and see where we stand on certain topics specific to our community. Nothing fancy, just a Twitter poll every now and again to spice things up. Last week I asked you guys ‘When playing otome games, which endings do you like to play through first?’–and the response was overwhelming with 410 of you all casting your vote.

But, I wanted to do something with this and actually list out some takeaways from the poll and kind of suss out some trends! So, let’s break down the results!

Ending Things on a High Note!

So the went about how I expected them to, with over 55.4% of the voters saying they play the Good Ends first when playing an otome game for the first time. That’s not too uncommon, since most folks prefer to end their playthroughs on a high note. Many of the folks who voted for Good Ends mentioned that they tend to avoid playing through the bad ends during their playthroughs, unless there are special CGs to unlock. Others just avoid them all together and prefer to just play through the Good/Best Ends.

Shooting Your Shot and Going In Blind

One of the biggest surprises to come out of the poll is that the second most voted for option was No Preference, just squeezing by with 17.6% of the vote. When I play a game for the first time I tend to go in blind just to see how I would do just being myself in that particular story–and it seems I’m not alone. Quite a few folks said they like to just leave it up to chance and pick whichever dialogue options speak to them whether that nets them the best end or the worst ending the game has to offer.

While there are those out there who go in with a plan and tailor their otome journey based on whether or not they like the love interest they’re currently pursuing. This is something I hadn’t really considered when I posed the question, but I can definitely see how someone’s feelings towards a particular love interest can affect their playthrough.

Bring on the Suffering

Coming in third place (just barely) 17.3% of voters like to go after the Bad Ends first. Now, folks have a lot of reasons for wanting to play the Bad Ends first, with most saying they play through them first, just to get them out of the way so they can enjoy the Good/Best Ends in peace. But, then you have those select few who just like to watch the world burn~ A handful of folks actively seek out the Bad Ends because they enjoy the content they offer. But, the majority of folks played Bad Ends as a last resort or as an unplanned outcome.

Going for a More Balanced Playthrough

Then there were the folks that go for a more balanced approach when playing otome games–a fair amount of players like to sandwich the Bad Ends in between the Good and Normal Ends. That’s a valid approach, especially if you’re a streamer who likes to end your game playthroughs on a high note for the sake of audience enjoyment. Others simply like to balance out the good and the bad story elements for a more comprehensive gaming experience.

So What Endings Do Otome Fans Tackle First?

Honestly, it’s all a matter of preference! Otome fans go into their game playthroughs with a number of factors in mind–whether that’s looking for their happily ever after with their chosen boy, enjoying the sweet suffering that is Bad Endings, or crafting a comprehensive viewing experience on stream. We’re all different and it was fun seeing how other otome fans tackle otome games!

I had a lot of fun with this poll and I definitely plan on doing more of them in the future! Be sure to follow me on Twitter @BeckNaja so you don’t miss out on the next poll and consider giving that like button a pat on the back so it knows it’s doing a good job!

2 thoughts on “Polling the #OtomeArmada: Which Endings Do You Play Through First?”