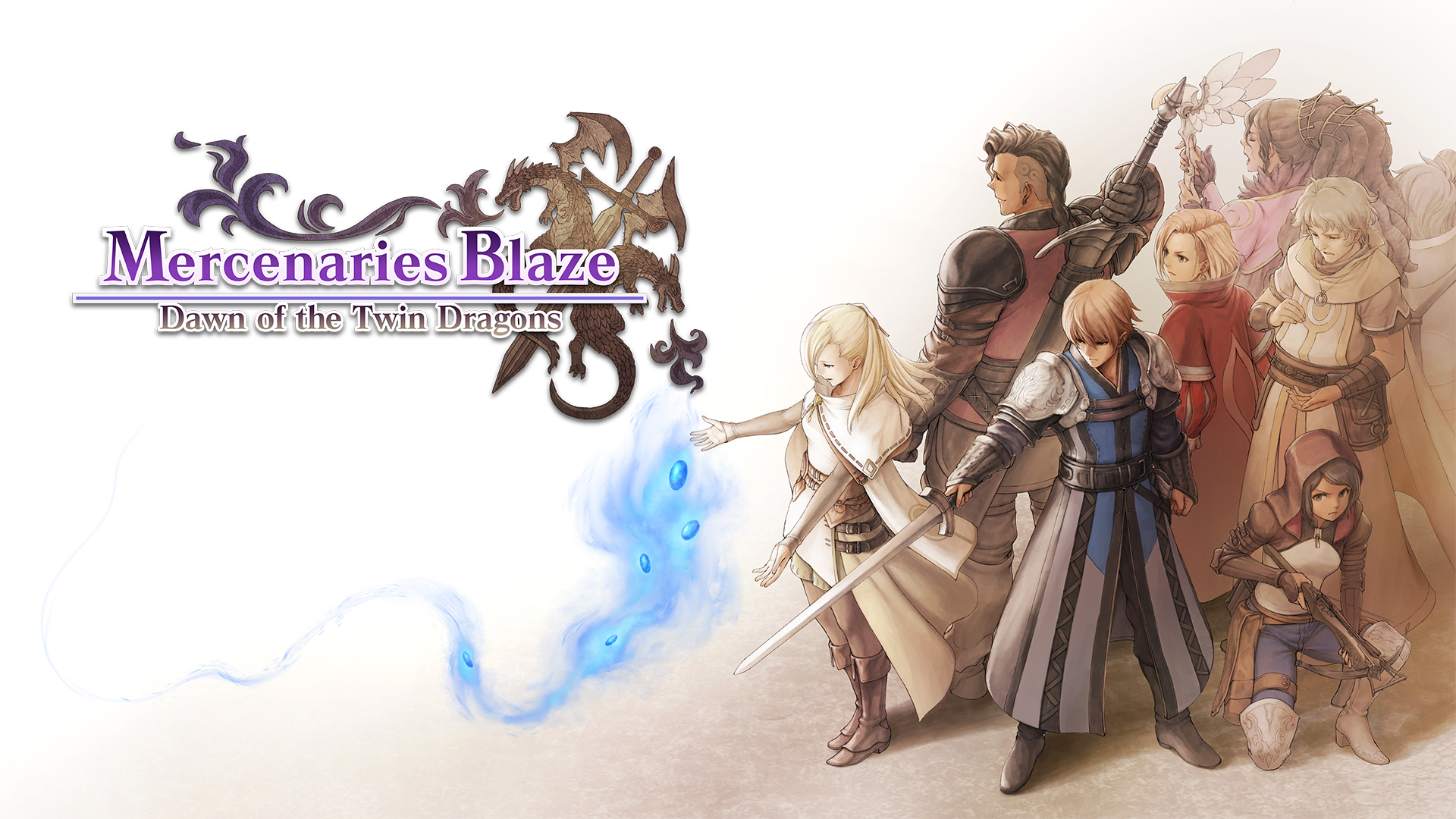 Experience a lengthy and challenging story campaign, an enthralling tale full of emotive writing, plot twists and high stakes moments. Grow with your team by clearing strategic turn-based battles, with many optional missions and details to consider – which class will you upgrade for each character, and what equipment or skills will you prioritize?

I don’t usually play tactical/strategy RPGs, because I have no patience for battle mechanics and those of you that have been following me for years know that stats raising is the bane of my existence. So, when Tion from Circle Ent. contacted me about possibly covering the latest Mercenaries game on my site, I was prepared to listen to their pitch and politely decline the request. But, then Tion mentioned that the game featured a BIPOC characters and touched on issues we face today–particularly immigration and racial bias. I was curious to say the least and it was with that mindset that I found myself sitting down to play Mercenaries Blaze: Dawn of the Twin Dragons.

Full disclosure, I have not played any of the other games in the series so I’m not familiar with the overarching storylines or characters. From what I gather Mercenaries Blaze is a pretty standard SRPG series that is heavily inspired by Final Fantasy Tactics—so if you’re looking for a game that’s going to revolutionize the genre, this probably isn’t it. But, for a complete novice like me, this is perfect game for me to cut my teeth on. The mechanics aren’t overly complex—you place your characters on the playing field grid and move them around like chess pieces until you take down all of the enemies. There are quite a few characters, each with their own battle styles and skill sets which you can mix and match to suit your party needs. I’m still fairly early on in the game so I have the out of the box team of, Lester (Esquire), Alvah (Fighter), Dalton (Cleric), and Connie (Gunner). Most hardcore tatical RPG fans would probably cringe at the state of my team, but I’ve been able to find a strategy that works for me… ie. Attack with Alvah until all the enemies are killed. It’s simple, but effective. 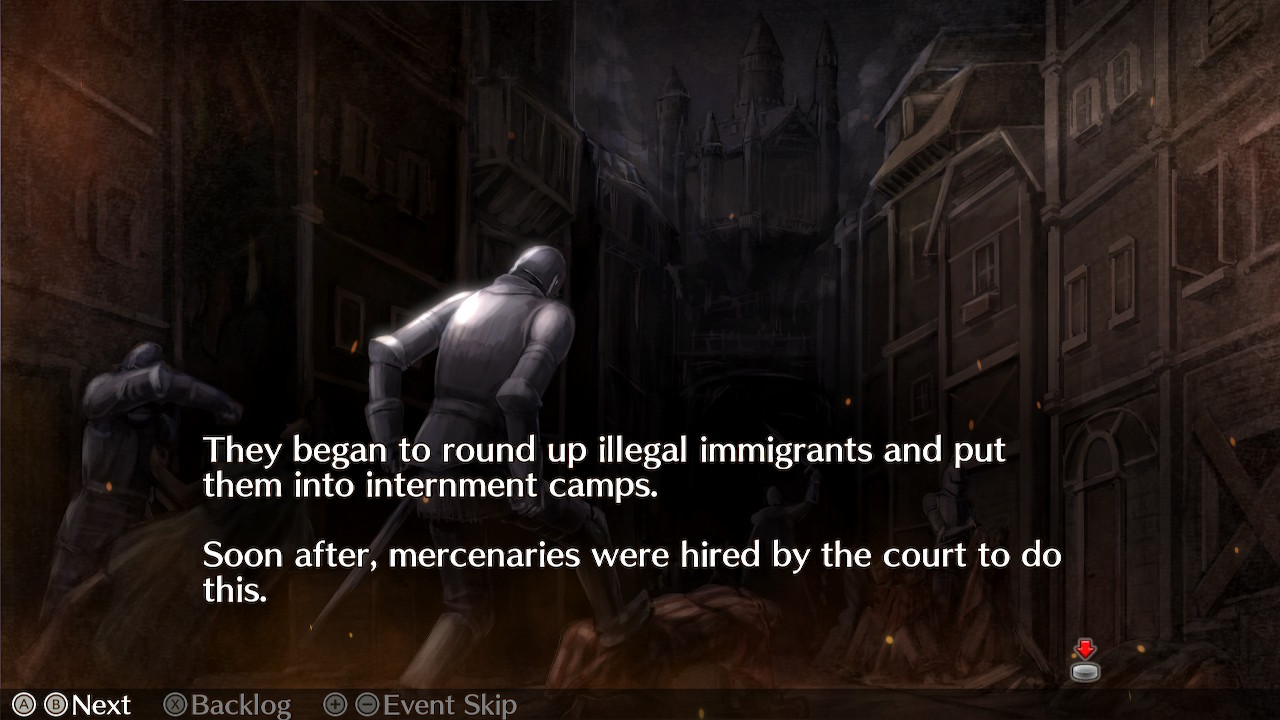 But, what really stands out to me about the game is the story. In the game there was a war between the kingdoms of Euros and Westa that resulted in severe casualties on both sides. In an effort to promote peace the kingdom of Euros agreed to allow refugees from Westa into the kingdom in exchange for labor. Over the years the people of Euros began to feel threatened by the rising number of refugees in their kingdom and demanded they be deported. The church stepped in and passed a law that the Westarii refugees could stay in the kingdom only if they were willing to convert to the Eurosii religion. Some converted, but others chose not to and went into hiding along the boarder. So the the kingdom began hiring mercenaries to round up the Westarii immigrants and place them in internment camps. In the game you control one of these mercenary groups, the Twin Dragons.

This immediately harkens back to WWII and the relocation and incarceration of Japanese Americans and more recently the Trump campaign’s forced detainment of individuals at the Mexican boarder. It’s a heavy topic for any game, but I was genuinely surprised to see something like this being tackled by an SRPG. And I’m going to be honest I was a bit squick about a group of primarily non-POC mercenaries rounding up a group of Black and brown immigrants. BUT, what was more intriguing (at least for me) is that one of the members of the Twin Dragons, Alvah is in fact Westarii. By joining the Twin Dragons he is actively working against the his own people, a point that is actually addressed in the game. There is this wonderful scene early on where some Westarii immigrants call Alvah out for siding with the enemy. His  Eurosii teammate Lester comes to his aid to tell the Westarii that it isn’t about race and that Alvah is a “good person and his friend” only for Alvah to turn around and tell Lester that he has no business speaking on his behalf because he has no clue what it’s like to be Westarii in Euros.

THIS IS HOW YOU DO REPRESENTATION! In any other game Alvah would have thanked Lester for standing up for him, reinforcing the white savior trope that is at the very foundation of allyship and in doing so erase any nuance Alvah has as a character. He is a Westarii man rounding up his own people in the name of a country that is clearly doesn’t want any of them there in the first place. This isn’t just a job for him, it’s personal and you really get the sense that Alvah is conflicted about his role in the machinations of the kingdom. He is complicit in a system that is actively working against him and this is something that a lot of people of color can relate to on some level and it really hit HARD.

Mercenaries Blaze can get a bit preachy at times, the writing can be a bit messy, but there are some really great gems every now and again that really made the game for me. But, I have to give the writers credit for daring to tackle a topic like this with their story. It’s not perfect, but I can definitely get behind what this game is trying to do and I’d love to see more games and developers do more with this idea in the future.

You can play the game on the Nintendo Switch!

Thank you for reading and supporting Blerdy Otome! Have you played Mercenaries Blaze: Dawn of the Twin Dragons? Share your thoughts! Got a Melanin Friendly Game you think I should spotlight? Send it to me!