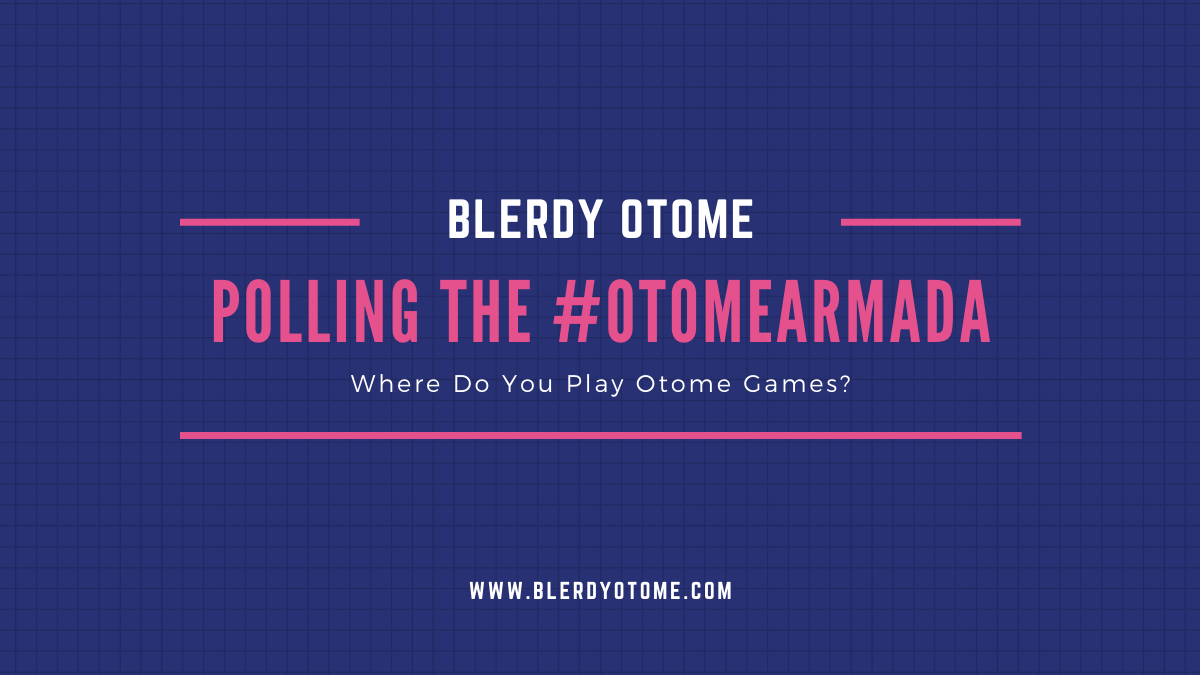 It’s no secret that otome games are still very niche genre within the broader gaming community. Even with an increase in English localizations of Japanese otome games here in the West, our community is fairly small–but, what we lack in size we more than make up for in voice! As a collective, the online otome fandom has been especially vocal when it comes to protecting our otome games–whether that is calling out localization companies on the quality of their releases or letting companies know what games we WANT to see released in the West– you can bet that the collective voice of the otome community will be heard.

As a blogger I use my platform to promote otome games (and indie romance visual novels), but I am just one of many voices in the otome games community and I don’t speak for everyone. So, I wanted to reach out to the #OtomeArmada and see where we stand on certain topics specific to our community. Nothing fancy, just a Twitter poll every now and again to spice things up. Last week I asked you guys ‘Where do you play your otome games?’–and the response was overwhelming with 302 of you all casting your vote.

But, I wanted to do something with this and actually list out some takeaways from the poll and kind of suss out some trends! So, let’s break down the results!

The Poll: ‘Where Do You Play Your Otome Games?’

Rise of the Nintendo Switch

So right off the bat, 50% of participants play games on the Nintendo Switch. After the “death” of the PS Vita, the Nintendo Switch has risen to become the hot new otome platform, with several otome localizations making their way to the console–so I’m not surprised to see it leading the pack. Many participants listed the portability of the console as their main reason for preferring the console, and I will admit that being able to take my games with me is a definite advantage over other consoles.

One of the biggest surprises for me was the 23.2% of participants that voted for PC (direct downloads). Some clarification, direct downloads are when you visit a website and download a game directly from that site–whether that is legally or otherwise. So, if you purchased let’s say Steam Prison directly from MangaGamer (and not Steam), I would consider that a direct download.

PC (Direct Downloads) beat out both Steam and Mobile out for the second place spot–which was a genuine surprise to most, especially when you account for how accessible mobile games are and the sheer number of mobile otome games available in English. Mobile (Phone/Tablet) came in at a close third with 16.9% of the votes.

Folks were kind of Meh about Mobile Games

Mobile games while coming in third was a bit of a mixed bag for most. Some mentioned that mobile games were where they started their otome journeys, while others admitted they only turn to mobile games when it’s the only platform available for a title. I found this to be interesting, since the rise in mobile gaming was suggested to be one of the main cause of the death of the PS Vita handheld console…

Beyond the Choices – Looking at the Comments

Twitter polls are rather limited in scope. While you can control the length of time you run your poll, Twitter limits you to only four poll options. So, there’s only so much you can get from the results, so it’s also important to look at the comments and get a better feel of why and how participants voted the way that they did. There were quite a few comments on this poll, with many providing additional feedback on their choices.

All of the Above

Still more folks mentioned that their choice was dependent on the convenience of being able to take their games with them–whether that’s playing from bed or taking your games outside of the home. Portable methods like the Nintendo Switch and Mobile devices had the obvious advantage for these individuals.

No real surprises here–a whole year after Sony announced that they would cease production of the PS Vita. The device was a hub for most otome game releases and even now most otome fans still see it as their go to gaming device. 26 of the 56 comments submitted mentioned the PS Vita in some capacity.

So Where Do Otome Fans Play Their Games?

Short answer, all over the place. Most participants played games on multiple platforms depending on what’s available–so there’s a pretty high level of interchangeability between platforms/devices. In the end it all boils down to access— gamers will go where games the games are being released whether that is the Nintendo Switch… Android… PC… or Steam–Multi-platform releases give players more choices for where and how they consume their games and while I don’t have much of a head for business, I think it is important for companies to take that into consideration when they are planning for their upcoming releases.

I had a lot of fun with this poll and I definitely plan on doing more of them in the future! Be sure to follow me on Twitter @BeckNaja so you don’t miss out on the next poll and consider giving that like button a pat on the back so it knows it’s doing a good job!

4 thoughts on “Polling the #OtomeArmada: Where Do You Play Otome Games?”