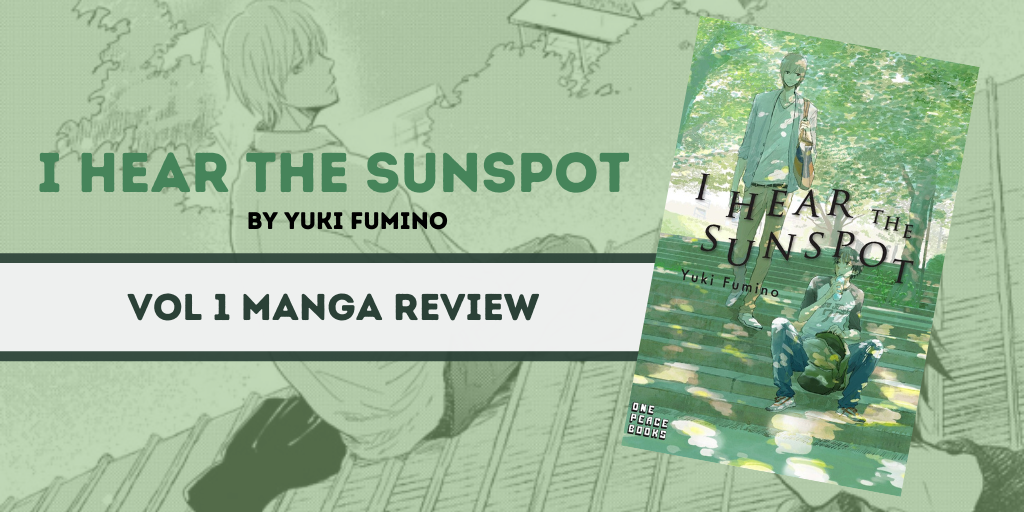 I’ve been on a real boys love kick lately, so I decided to finally read through Yuki Fumino’s I Hear the Sunspot. The series focuses on the relationship between a hearing impaired college student and his cheerful and outspoken classmate. Originally released in 2014 as a stand alone volume, the story was expanded into a second volume, I Hear the Sunspot – Theory of Happiness and then again as the ongoing series I Hear the Sunspot – Limit. The series is currently licensed in English by One Piece Books, I picked up the first two volumes at con and I fell in love with the series, so when I saw them up for pre-order on Amazon, I snapped the rest of them up as well. Unlike most of the series I buy, I Hear the Sunspot is an ongoing series, with only four volumes available in print (as of this writing).

Kohei is a hearing-impaired college student who is used to being misunderstood by his peers due to his disability, to the point that he’s resigned himself to a life of loneliness. But, when he meets the outgoing and friendly Taichi, Kohei finds his quiet life of solitude is no longer enough to satisfy him. After sharing their lunch together, the pair strike up an instant friendship that slowly develops into something more than friends, but less than lovers, where will life take these two very different young men…

I Hear the Sunspot is a boys love story in the same way Banana Fish is a shojo… When I picked up this series I fully expected it to go the way of Ten Count, with Kohei’s disability being used as a vehicle to further his romantic relationship with Taichi. And while you could argue that it’s because of Kohei’s hearing impairment that he and Taichi even meet in the first place, Fumino makes it clear from the start that Taichi doesn’t define Kohei by his condition, nor does he fetishize it. In fact, there’s a scene early on in the volume where Taichi openly chastises a female classmate for doing just that, when she likens Kohei to the hero of a romance novel featuring a deaf protagonist.

Unlike most of his peers, Taichi doesn’t have any ulterior motives for approaching Kohei, in fact he quite literally drops in on him by chance during one of Kohei’s solitary rooftop lunches. It’s only after this encounter that he learns about Kohei’s hearing impairment, and even then he doesn’t treat him any differently because of it. Taichi is an anomaly both in the story and in Kohei’s life, as he never makes Kohei feel like he is anything other than one of the guys, engaging him in conversation much like he would any of his other classmates. He makes an effort to get to know Kohei as a person, and even volunteering to be his note taker in class as a way to spend more time with him. But, unlike Kohei’s well meaning classmates, Taichi actively seeks to understand Kohei and even goes a step further by engaging him in social activities around campus.

Kohei, who is used to being excluded by classmates — who either don’t know or don’t want to take the time understand him or his condition or worse, viewed as a charity case — finds a genuine friend in Taichi, who is a cheerful and friendly guy, trying to find his way in the world. Unlike Kohei, he has no trouble making friends and is genuinely well liked by his peers. But, even he has his share of troubles — in the past he too has dealt with abandonment and loneliness — but unlike Kohei who retreated within himself, Taichi took the opposite approach, developing a desire to support others. It is his openness that helps Kohei come to terms with his hearing loss and start to accept it not as a weakness or a handicap, but an extension of who he is as a person.

Fumino doesn’t just explore the relationship between Kohei and Taichi, but what it means to be an individual living with a disability. However, unlike in many series where a character’s “otherness” would be used as a gimmick to add unnecessary drama to the story, Fumino humanizes Kohei’s condition by treating it not as an obstacle that must be overcome, but instead looking at the emotional toll his hearing impairment has on his life — how he views his condition, how others treat him because of his condition, and the isolation and loneliness that comes from being labeled as “other”.

But, Fumino goes further, exploring the division that exists within the hearing impaired community, Kohei isn’t deaf in the traditional sense – he has some hearing and he can read lips. His hearing impairment is enough to affect his day to day life, but because he does retain some degree of hearing he exists within this grey area of the spectrum. Because of this he is often misunderstood by his peers, who don’t understand his condition, so Kohei voluntarily isolates himself from others and resents the unwanted “sympathy” of those around him. He internalizes a lot of his emotions, shouldering the burden of his condition on his own rather than being open about his limitations. For him it’s better to be perceived as distant and unsociable, than to be labeled as “disabled” or “special”. Kohei even goes so far as to refusing to learn sign language, something that would make communicating easier, because he feels that it’s just another thing that marks him as different from everyone else.

Kohei blames himself for his disability, and a lot of his growth during the story comes from learning to be comfortable with his hearing impairment—something that he discovers through his relationship with Taichi. The relationship between Kohei and Taichi develops slowly, it’s not so much romantic at first and there were times when I forgot this was a boys love story. Romance isn’t at the forefront of their relationship, and it’s nice to see their friendship develop naturally as a result. The romantic undertones of their relationship are very subtle in the first volume and even when they are addressed, it’s more of an extension of their existing friendship and not something that feels forced, which goes well with the slice-of-life vibe of the story as a whole.

10 thoughts on “I Hear the Sunspot BL Manga Review”