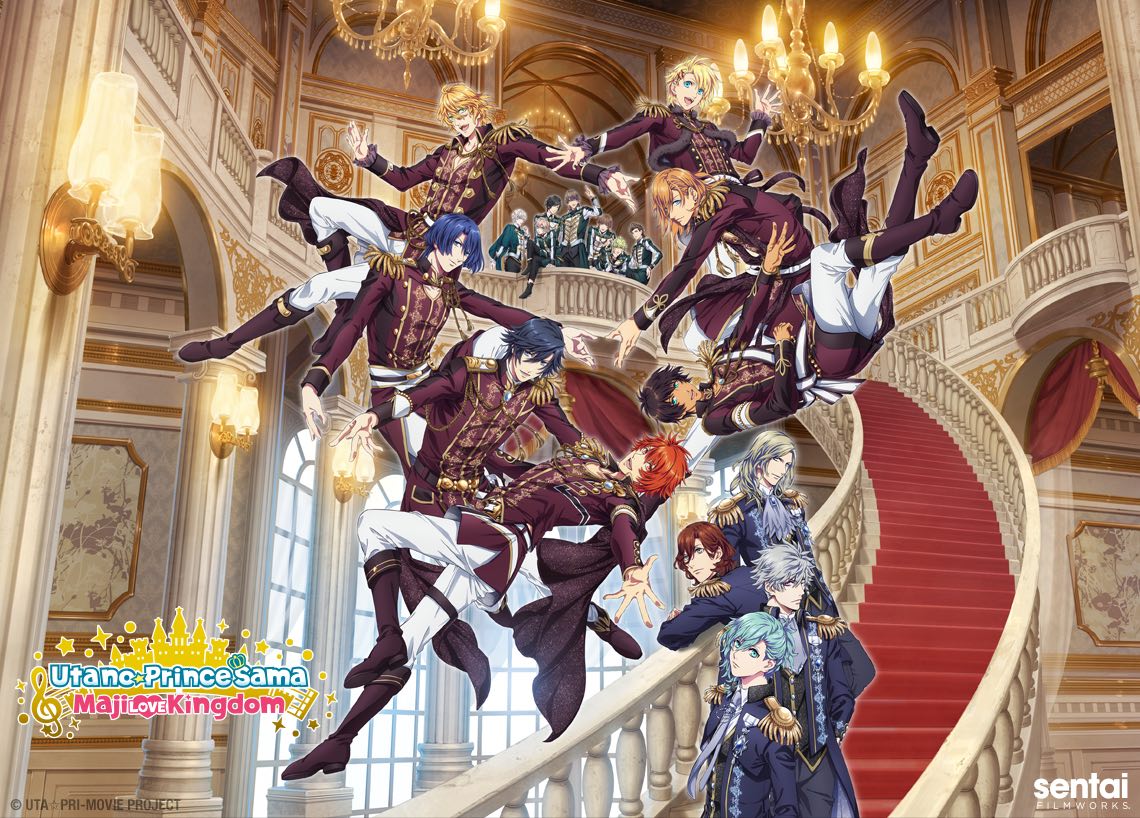 Uta no Prince Sama or UtaPri as it’s called by fans is a multi media phenomenon, that has been enjoying over 9 years of popularity from its beginnings as an otome game back in 2010 to the newest film, Uta no Prince Sama Maji Love Kingdom. The series has been going strong for years with multiple fandiscs, spin-offs, and sequels. It is a powerhouse of a franchise with fans the world over, so you can bet there was a lot of hype surrounding the release of Maji Love Kingdom! The film debuted on June 14, 2019 in Japan, with the English subtitled version of the film premiering at Anime Expo 2019. But, there was also another pre-screening event here on the East Coast in Washington, DC at Otakon 2019, which is where I saw the film. And while it was a much more humble affair, when compared with the much more publicized Promare premiere, Otakon attendees were eager to see the film before it’s official theatrical release!!

So, full disclosure, I have never seen the UtaPri anime nor have I played any of the games, so I seriously didn’t know what to expect when me and a friend ducked into the moderate sized screening room where the film was being screened. Fans were already gathered, talking animatedly about the con and the upcoming film, and I noticed a few even had concert glow sticks, which I thought was odd, but not completely out of the norm at an anime convention. I soon discovered that Uta no Prince-sama: Maji Love Kingdom wasn’t a linear narrative-driven movie, but a 90 minute animated concert with CG renderings of the UtaPri boys, from their over the top idol performances to their fun witty on stage banter, Maji Love Kingdom was quite the experience. Amidst the screaming audience members (yes, there was plenty of fangirl squealing) and the myriad number of glow sticks illuminating the room, what should have been a simple film screening reminded me of the same electric energy I felt while watching the Anisong Matsuri Concert series a few years prior.

As far as films go, Maji Love Kingdom is a glorified 90 minute animated music video with all the bright lights and over the top performances you’d expect from fictitious idol groups. However, the experience was made all the more enjoyable by the audience. The film encourages fan participation, with the lyrics to the songs displayed on the screen, there were even cues for all the audience chants, so it really felt like I was sitting in a real concert! Even the intro where we are introduced to all of the boys of STARISH, Quartet Night, and HEAVENS. Girls (and the few guys there) cheered for their favorite boys as they appeared on screen and while I’m not familiar with all the guys, I did see a few that piqued my interests… I mean come on, I’m not immune to the charms of cute 2D boys… From there the film introduces us to the idol groups. STARISH, Quartet Night and HEAVENS all get roughly the same amount of time on stage, with each group getting two songs each, one big group number at the end, and several blended group songs towards the middle of the film. The songs are all what you’d expect from J-pop idol groups, heavy on the theatrics, which given the animated format allows for more over the top performances than you’d see in a real concert. Like there was a scene where the boys rode a rainbow colored flying train across the concert hall and I don’t care how many special effects you use, that is just not humanly possible. NOPE. But, it looked freakin’ amazing on screen!!

I will admit that Quartet Night had my favorite performances, there is just something about their mysterious seductive vibe that really appealed to me… Though my favorite parts of the film were the combination performances where members from the main three groups shuffled to create hybrid groups. All of the guys have great chemistry, which I assume comes from all their experiences in the series proper, so it was nice to see that in play while they were on stage. I found myself actually invested in their on stage banter, laughing in spite of myself at some of the funnier moments and honestly feeling emotional during the final recap montage at the end, despite never having seen an episode of the series.

After sitting through the 90 minute film I had the urge to listen to all of the UtaPri music I could get my hands on and binge watch the anime (which I totally did), which I suppose was the point of Maji Love Kingdom. Ultimately, the film is about selling albums and merch and I can honestly say they did a damn good job of it! I’m now fully integrated into the world of UtaPri and I have this film to thank for it!

I may have started as a skeptic, but when I left the premiere of Uta no Prince-sama: Maji Love Kingdom I had caught the UtaPri bug. I mean, how could I not? With the animated audience and the hot animated idol groups, I felt my heart waver… but, I’m also in the film’s target demographic so it’s not too out of character for me.

If you’re not really an UtaPri fan going in you most likely won’t be swayed by this film, but if you’re even a little susceptible to the wiles of hot singing anime boys, this film will have you hooked from start to finish!

2 thoughts on “Uta no Prince Sama Maji Love Kingdom Film Review – Did I Just Fall for an Anime Idol Group?”