The horror genre has always been about telling good stories. Made up campfire stories, urban legends, and folk tales… there’s something thrilling about a good scary story. But more often than not it seems like most big budget horror media is more concerned with hashing out the same old played out cliches and tropes, than they are with telling a good story. Jump scares and predictable characters are the norm, to the point that it’s rare to come across anything that feels genuine, let alone telling a good spooky story.

Every so often I come across a good scary story, one that renews my faith in the horror genre and Atelier Sentô’s The Doll Shop is one of those hidden horror gems. The Doll Shop is a slow tale that ditches the usual horror cliches in favor of telling a truly unsettling story. In a secluded Japanese village, there lives a quiet doll maker, who is content to spend his days with his dolls. Each one is more beautiful than the last, and so he spends his days in isolation, until his childhood friend, a beautiful young woman from the city arrives. She’s unlike anyone he’s ever met before, and suddenly his dolls aren’t enough to fill his lonely existence. But, he has a secret… he’s just waiting for the right person to share it with…

The Doll Shop is more of an atmospheric horror game, with its quiet snowy setting and tranquil soundtrack, it’s the perfect backdrop for a truly haunting story. Atelier Sentô has said that each of their stories is based on memories of their time in the Japanese countryside, and with the beautiful hand painted art style of the game there is an unmistakable rustic feel to The Doll Shop that lends itself well to a much subtler tale. With the constantly falling snow, and the animated whiteout effect, the feeling of isolation is one of the most prominent themes of the game, which only serves to build a sense of foreboding as we get to know more about the Doll Maker and his secret. 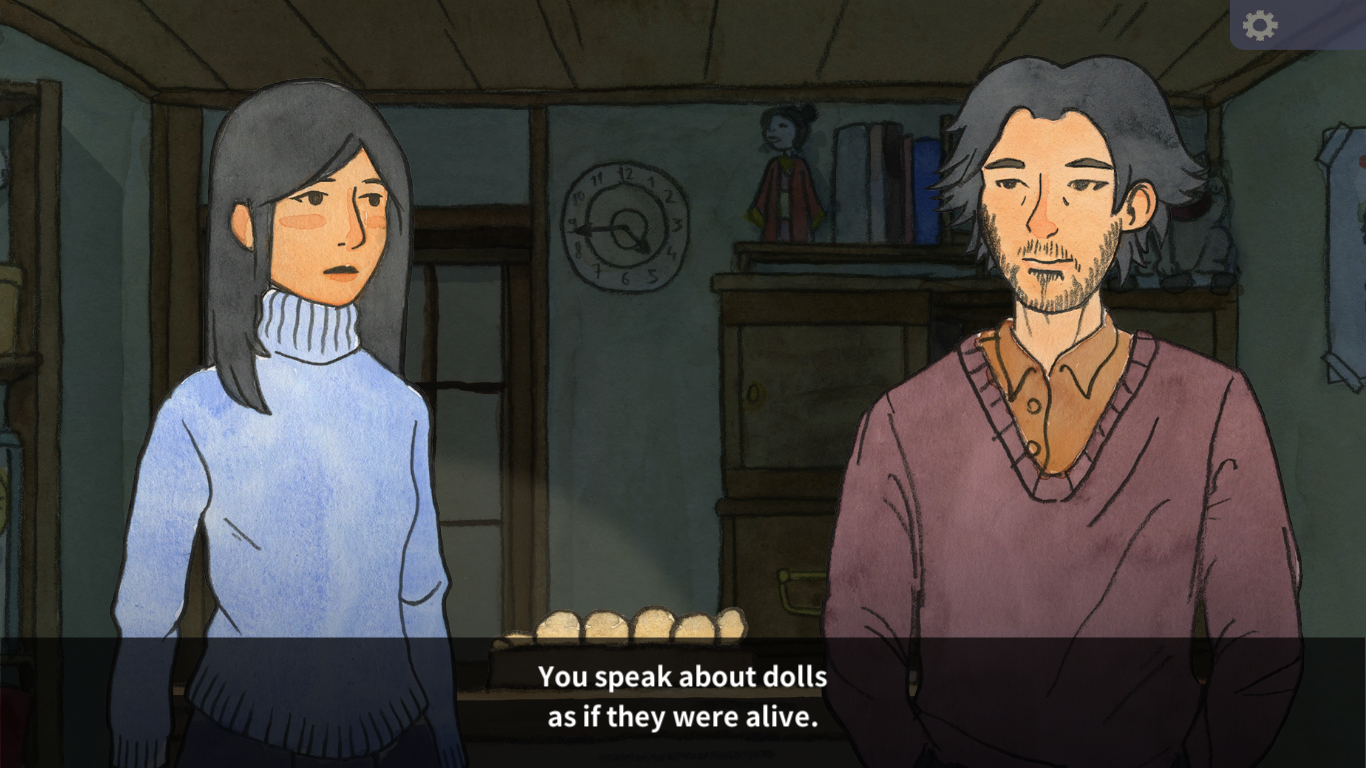 There are all these really great hints that something isn’t quite right about the Doll Maker, but the developers manage to strike this nice balance (at least early on) between making him a sympathetic character, while also setting him up to be a genuinely horrific figure. The Doll Maker has an almost unhealthy obsession with his dolls, a fact that he discusses at length, even going so far as to actually talking with them on occasion, including one “special” doll that he is especially attached to. As if this wasn’t unsettling enough, the Doll Maker is an avid butterfly collector, keeping several of them pinned to framed cork boards in his back room. You get the sense that the Doll Maker is detached from the world around him, since his interactions with the townspeople seem wooden and forced when compared with the ease he has when conversing with his dolls. 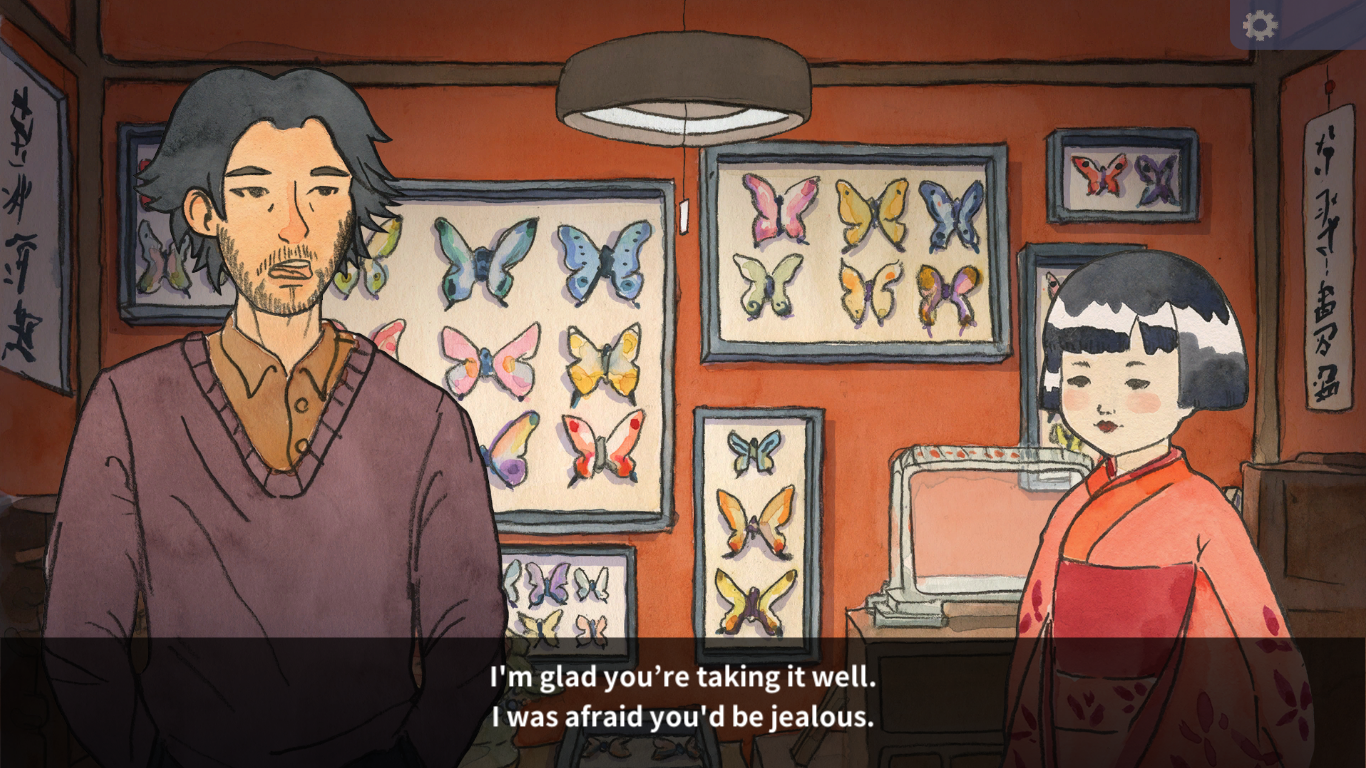 While the synopsis says that The Doll Shop is “half romance, half horror…” the romance is downplayed in comparison to the horror. In fact, the romance isn’t “romance” in the traditional sense, so don’t go into this expecting an otome game, because that’s not what The Doll Shop is about. Rather, the romantic undertones serve to facilitate the Doll Maker’s mental dilemma as he attempts to choose between his growing feelings for his childhood friend and his dedication to his dolls. The childhood friend, is much less a character in her own right, and more the embodiment of the Doll Maker’s fantasies. You have the option of pushing her away (by revealing the Doll Maker’s obsession with his dolls) or you can pursue her by presenting the Doll Maker as a shy but well meaning gentleman. Whichever path you chose opens you up to one of the three endings, each one more unsettling than the last. Trust me, there really isn’t a “good” ending, this is a horror game after all, but there is one that is not as “bad” as the others.

Ultimately, like most visual novels you decide the course of the story, through your interactions with the various villagers, but there is an added interactive portion that further give players the chance to step into the Doll Maker’s shoes. The Doll Repair mini games perfectly capture the slow methodical movements of someone that cares a great deal about their craft. It’s oddly satisfying seeing a doll slowly come back to life, whether you’re carefully gluing a broken doll’s face back together or adding the final touches of paint to the doll’s cheeks you start to feel an appreciation for the Doll Maker and his craft.

Atelier Sentô’s The Doll Shop is a game that is both captivating and deeply unsettling. With its beautiful hand painted artwork and tranquil soundtrack, The Doll Shop sets the mood for a delightful horror story. It’s simple in its execution, which ultimately works in Atelier Sentô’s favor, allowing for a much more organic story that carefully builds on itself until its unnerving conclusion.

The Doll Shop does have its cliche moments, the “big reveal” is definitely predictable, but it’s built up so well that it still has the appropriate shock value. Which is what really makes the horror work, the ending almost doesn’t matter, because the journey is just so good. It’s easy to get swept up in the slow ambiance of the game, everything about the story lulls you into this false sense of security that is completely shattered by the slow mental decline of the game’s protagonist. Unlike most horror, the writers of The Doll Shop adopt a show don’t tell storytelling method, letting the visuals convey the more nuanced aspects of the story. Very little is actually explained, leaving much of the story up to interpretation, which makes for a much more unique gameplay experience. You never really know exactly what’s real and what’s a product of the characters, which leads to some very surreal moments; abrupt scene transitions, fantastical apparitions, and coded dialogue all create a sense of uncertainty which only adds to the mounting tension of the story. They all work together to create something truly unforgettable.