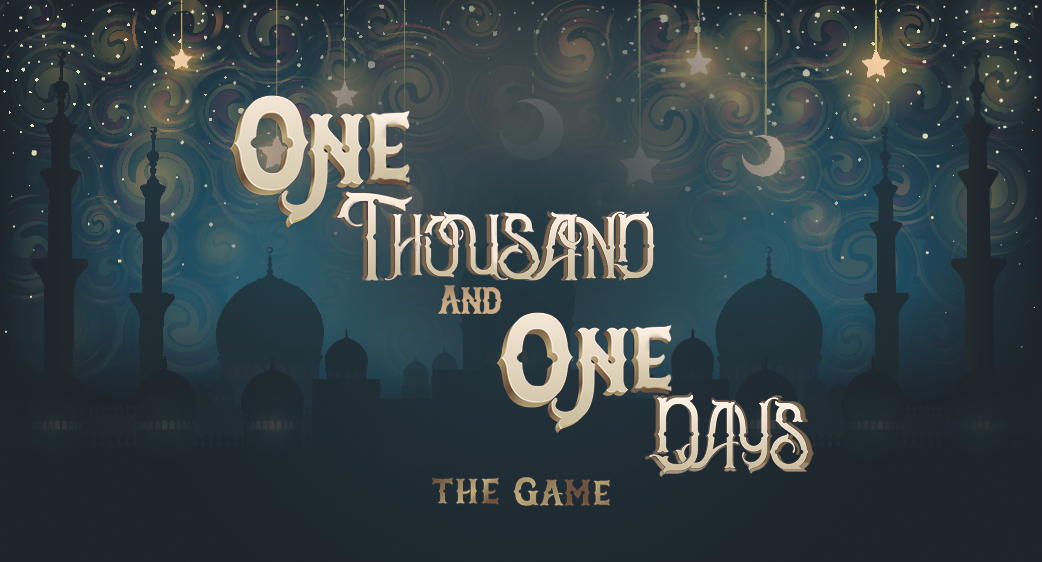 For someone that shies away from incomplete series, I’ve been really getting into episodic visual novels. Rather than blazing through a game in one sitting, the plot unfolds over a series of chapters/episodes and because there is usually a bit of a wait between new releases, this gap in new content gives you a chance to really dig down and fully explore the different story elements and scenarios in the interim. It’s a much more comprehensive gaming experience than I’m used to, but one that definitely allows for a much more immersive experience overall.

Recently I had the chance to give Asif G.’s Arabian Nights inspired fantasy visual novel, One Thousand and One Days a try and I was blown away by what I played so far. The game borrows heavily from ancient Persian mythology and Islamic lore AND features an all POC cast that draw inspiration from Middle Eastern, North African, and Mongolian cultures. On top of that, the game is LGBTQ+ friendly, with love interests with differing gender identities and sexual orientation. There are even poly romance options in addition to the standard one on one romances choices. 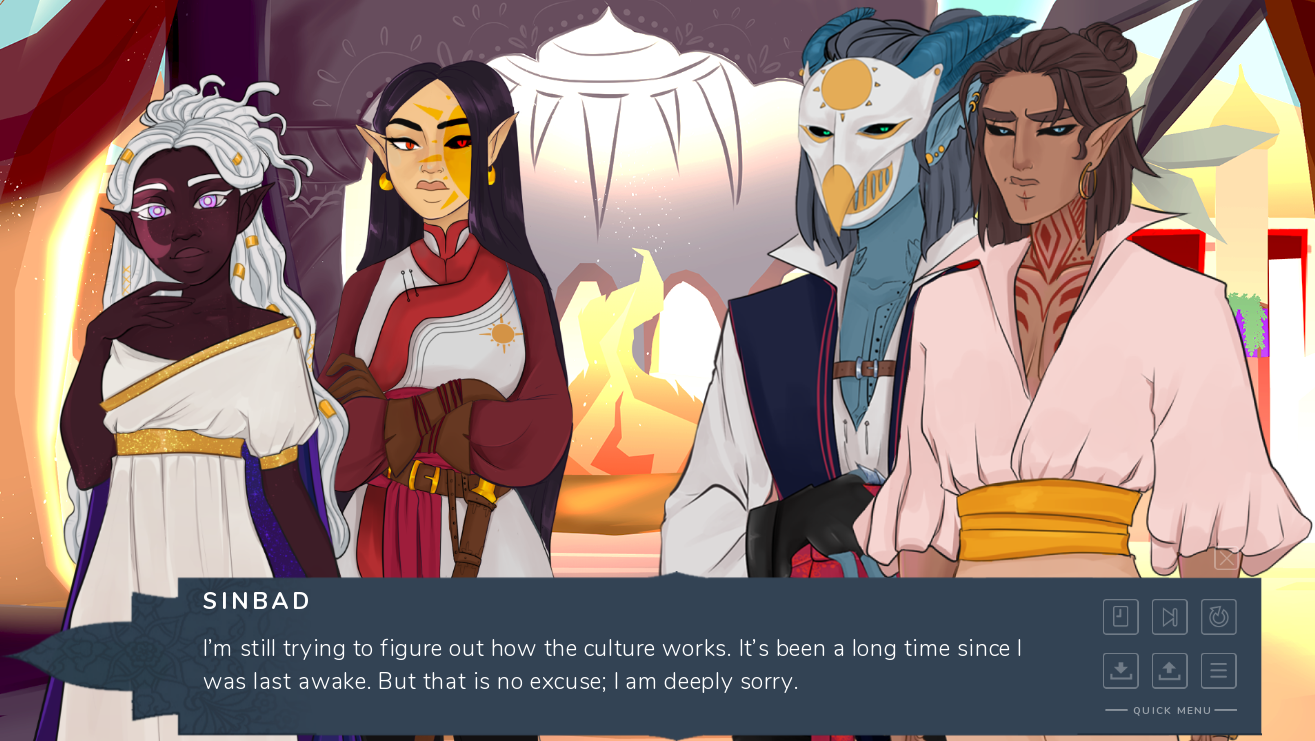 I’ve mentioned One Thousand and One Days on a couple of lists already, but I wanted to write a proper review about it because I don’t see many other people talking about it. This is one of those hidden gems that seriously deserves a lot more love, since there aren’t too many games that focus on Islamic culture and feature such a diverse blend of characters. There’s a point in the story where there is a call for prayer and it is that level of detail that I live for, prayer is an important aspect of Islamic culture and to see something like this in a visual novel is very progressive. 1001 Days brings to life a rich and immersive world full of magic and mysticism that celebrates each of the unique cultures that it draws inspiration from, while also weaving a captivating story of mystery, intrigue, and of course romance.

Set against the backdrop of the city of Gehennam, you take on the role of the Dreamer, an individual gifted strange and mysterious visions, each one more terrifying than the last. Your search for answers draws you deeper into a world of court intrigue and magic as you delve into the ancient secrets of the city and the people that live there. At the start of the game, rumors have been spreading about a series of mysterious disappearances at the palace. However, it isn’t until the night of the Fire Festival ball that things take an even more sinister turn. The Empress is attacked by an unknown assailant and you are blamed. An investigation into the incident is ordered, and you must discover the real culprit behind the attack. Along the way you encounter Anka, a Ridam princess; Alibaba, the half- Lotogh court spymaster; Sinbad, one of the Empress’s Champions and the last of the Div; and Noor, the half- Nnjid general and another of the Empress’s Champions.

There are five main fantasy species featured in the game: the Ridam, the Lotogh, the Nnjid, the Div, and humans; each has their own distinct appearance, history, and lore associated with them. The Ridam are in tune with the astral plane and typically have darker skin tones; the Lotogh are a nomadic people, they’re tall with horns, tails, and scaly skin; the Nnjid are scholars content with studying the world’s mysteries; the Div are an extinct race of people, right now, not much is known about them, aside from Sinbad being the last surviving member.

In the game you can choose to play as either a Ridam, Lotogh, or a Nnjid and as with the love interests, each option comes with its own unique character background and history. While the main story plays out the same regardless of which of the three playable species characters you choose at the start of the story, there are a few differences in the ways each player character interacts with the individual love interests. For example, the Ridam player characters is best friends with Anka so there is an existing intimacy to your interactions that is missing with the other love interests. If you play as the Nnjid player character and pursue Alibaba, he is much more open with you than he is with the other characters (Sinbad not included) and his dialogue strongly suggests that there is a preexisting history there… There are all these really great differences which definitely lends itself well to multiple playthroughs, allowing for a better understanding of the characters and the story.

There are some aspects of the story that are a bit unclear, since you’re kind of dropped into the story without much explanation outside of the brief character descriptions during the player character selection scene. However, I do prefer having a game slowly reveal everything over the course the story rather than a massive info dump early on, so it’s really a matter of preference. I get the feeling that there is a lot of lore that will be covered in later installments and I can’t wait to discover everything 1001 Days has to offer in the future. There’s also an in-game glossary that gives background info on the various species and lore, which I found to be very helpful. Right now the story is four chapters in and there’s already a great framework for the various mystery plotlines.

Each character has their secrets and these first few chapters explain just enough to leave you wanting more. Usually I have a favorite love interest, but with 1001 Days I had a really hard time choosing just one since all of the characters have their own unique quirks and personalities. However, if someone twisted my arm, I’d have to go with Alibaba, I have a thing for snarky characters AND I MUST KNOW WHAT HE’S HIDING BEHIND THAT MASK!! But I really loved Sinbad too, he is such a fun character and the mystery surrounding his past is something I definitely want to know more about! Noor is such a cool character too, she’s a fricken general and a former pirate too, come on tell me that isn’t badass!! And of course who could forget Anka, the thrill seeking Princess and her design is just so fricken gorgeous!

I am a sucker for great art and 1001 Days is one of the most beautiful games I have played in a long time! The character designs are stunning, and like the story, heavily influenced by Islamic, Middle Eastern, North African, and Mongolian cultures, but with an otherworldly fantasy twist. Each design choice lends itself to the overall mystique of the game’s setting, each species has their own unique features and appearance, which is only enhanced by the vibrant and bold coloring of the clothing and backgrounds. There is a fantasy feel to the characters in the world, but by blending it with an existing cultural base it really grounds the characters and the game. This of course made striking with the music, which brings to mind visions of a sweeping fantasy epic, heavy with lute, guitar, drums, and more.  All together, this is just a really well made game with a fantastic concept and great execution.

One Thousand and One Days is an enchanting game with the potential for some great world building and character development in future installments. This game has it’s own unique voice that really stands out from the more European-centric and Japanese inspired visual novels and otome games. 1001 Days proves that there are a wealth of great storytelling opportunities, there aren’t too many games that have one let alone an entire cast featuring characters of color. But the writers really pull it off, handling each of the characters and the various mythologies and cultures with care and respect.

Asif G. has created a wonderful and vibrant world that I am excited to explore more of as the story unfolds. One Thousand and One Days is an inspired visual novel experience that will appeal to fans looking for something new to dive into.

You can also contact Asif G. on Social Media through the following channels. Definitely reach out to them and let them know what you think of the game.