Seven Districts of Sin: The Tail Makes the Fox takes us on a journey into the depths of Hell with Lilim (name changeable) an ambitious (and naive) two-tailed gumiho working as an auditor under the most illustrious one, Lucifer. Loyal to a fault, Lilim is over the moon when her exulted leader of hell gives her a special assignment- investigate allegations of soul laundering in the district of Kumonoito. If she does a good job, maybe Lucifer will finally give her the recognition she deserves… But what awaits our naive heroine in the house of Anzu, the governess of Kumonoito will be anything but a cake walk. Will she be survive her mission? Or will she fall prey to the secrets of Anzu’s palace?

The Tail Makes the Fox is the first episode in a series of collaborations between Reine Works and Top Hat Studios (though Episodes 2 and 3 have yet to be released). Each episode is meant to be a self contained story, that follows the same cast of characters.

Right off the bat I want to say, Seven Districts of Sin: The Tail Makes the Fox is not for everyone. It’s a parody game so it relies heavily on comedy for it’s bread and butter, and believe me, The Tail Makes the Fox is chocked full of eye roll inducing bad jokes and flawed characters. But there is something to be said about how self aware the game is about it’s content. In fact the developers embrace the cringe worthy dialogue and jokes and even poke fun at the cheesiness of some of the humor. It’s refreshing to play a game that doesn’t take itself too seriously, however, this brand of tongue and cheek humor isn’t for everyone. 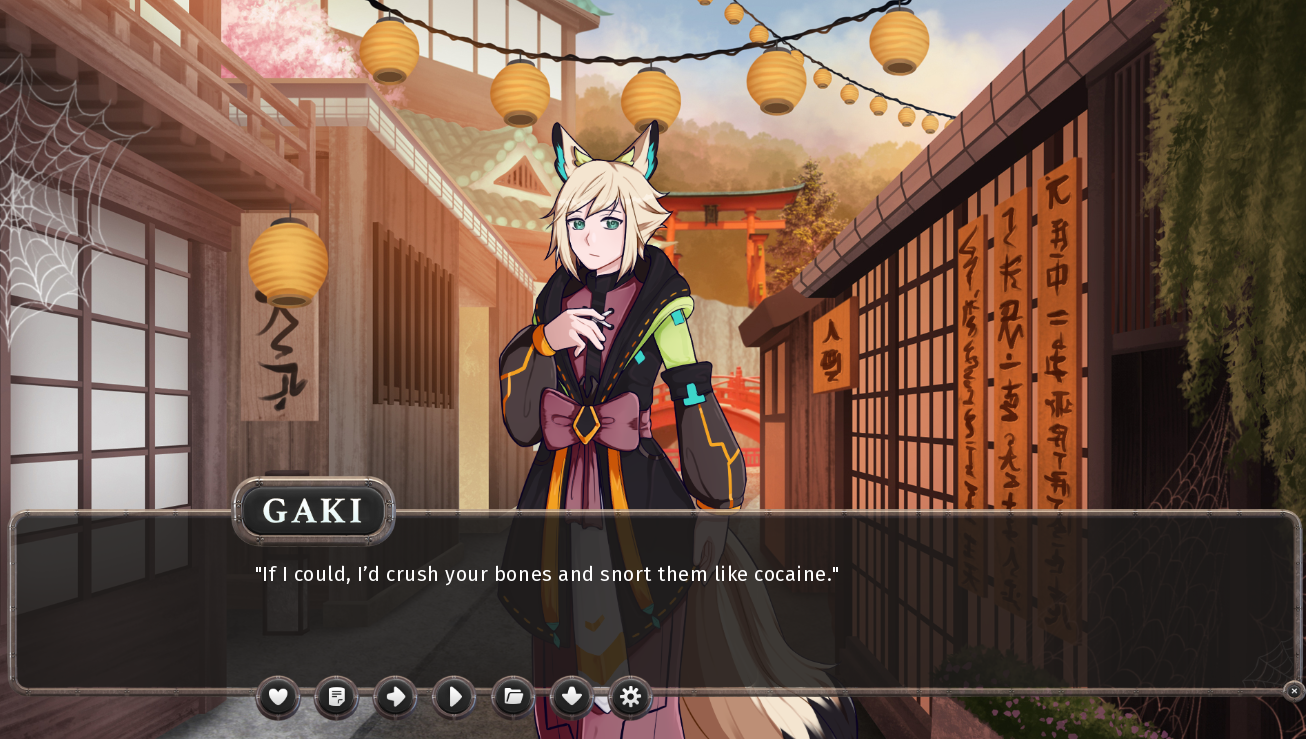 A lot of the comedy stems from the characters themselves, which features a delusional (and a touch naive) two-tailed kitsune that believes she’s a gumiho (nine-tailed fox) despite only having just two tails. She is absurdly loyal to her boss Lucifer, even though she is little more than a faceless pawn, there are times when her devotion borders on insanity… Like the “humor” of the game, Lilim can be a bit hit or miss, her naivete and lack of awareness about her situation is mind boggling, but oddly enough endearing. During her investigation she encounters Anzu the enigmatic governess of the Kumonoito district; her devoted demon “pet” Kali; Saleos, Anzu’s helpful vampire butler; and Gaki the perverted son of one of Kumonoito’s noble houses. If I had to choose love interests that were better suited for Lilim, I’d recommend Saleos or Kali, since Lilim grows as a character through her relationship with each.

The routes themselves rarely stray away from the game’s comedic premise, though I did find that Kali and Saleos’s routes had quite a few genuine moments that really fleshed out the characters and their backgrounds. However, Gaki’s route was devoid of anything remotely redeeming, which is a shame given how much I loved his character design. I’m usually not a fan of flirty characters, but Gaki takes his perverted rantings to a completely new level, cringy doesn’t even begin to describe how hard it was to get through his route. Though, I really enjoyed Anzu’s route, she was the most nuanced of all the love interests, since she is the character with the greatest air of mystery about her that I was genuinely invested in uncovering. 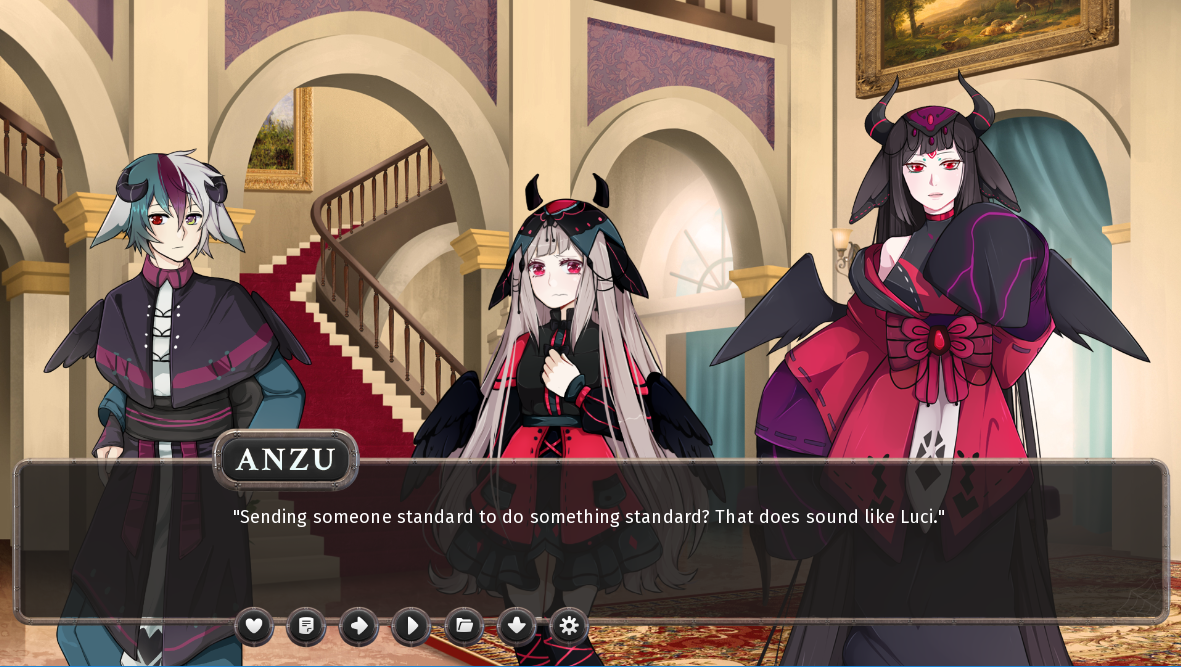 In fact, the world of the game is definitely one that has a lot of potential for great world building in subsequent episodes and stories. Having Hell divided into seven districts, each with their own governors and cultural bubbles is a cool concept. In The Tail Makes the Fox we mostly spend time in Kumonoito and only areas specific to the characters, but even with that limited lens we learn a lot about the districts and a few of the demonic/supernatural races. There are mentions of a previous war that seems to have far reaching implications into the lives of the characters and the current status of Hell and the districts. I don’t want to spoil too much for you guys, but despite the comedic overtones of the game, there’s a hint of something deeper simmering just beneath the surface.

Visual novels rely heavily on the art and on that front, The Tail Makes the Fox knocks it out of the park, the character designs in this game are absolutely gorgeous! Most of the characters seem to wear Asian inspired clothing in eye-catching vibrant colors. The characters are supernatural/fantasy beings so they have features that reflect that; Gaki and Lilim are kitsune so they have fox ears and tails, Anzu is a succubus so she has horns, as does Saleos though he’s a vampire. The CGs feature both more stylized anime artwork and cutesy chibis, which really lends itself well to the more comedic tone of the story. But, what I really loved was the voice acting! The Tail Makes the Fox is fully voiced by an English language cast, and each of the VAs did a fantastic job (especially given some of the more cringy lines). The VAs went a long way towards making these characters feel more real, especially DJ Horn (Gaki’s VA). I may hate Gaki as a character, but I have to give it to Horn, he went all in with his delivery! But, seriously, the voice acting is top notch and given the $9.99 price tag for a fully voiced game, that’s a steal.

While Tail Makes the Fox is a self contained story, and each route does have a “conclusion”, most of the endings leave a few plot threads open for future installments. I’m always a bit wary of games that include “part 1” or “episode 1” in their title, since I have seen far too many cancelled/dropped games over the years… however, Episode 1 does have just the right amount of mystery to set you up for more in the future.

But, don’t just take my word for it! Check out the game over on itch.io or on steam. Also take a look at the game’s trailer below!

Definitely take the time to check out their social media pages and websites and let Reine Works and Top Hat Studios know what you think about their works!

4 thoughts on “The Seven Districts of Sin: The Tail Makes The Fox Episode 1 Review”