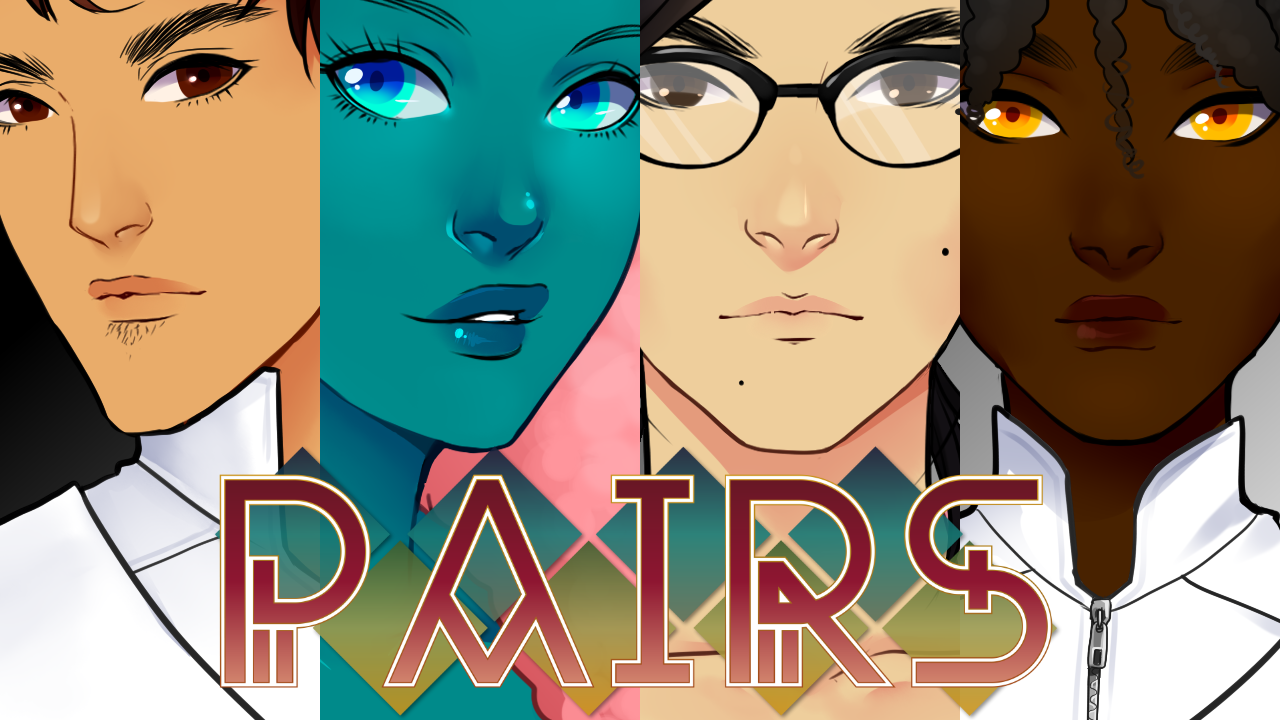 Walk a mile in someone else’s shoes in the sci-fi fantasy visual novel, Pairs. Originally submitted for NaNoRenO 2017, Pairs follows the romantic ups and downs of two couples in the midst of an ongoing alien war between Earth and the invading Naian people. However, this game is unique in that it allows players to experience both perspectives of each of the two main pairings.  Like most NaNoRenO games, the team had a month to complete the game, so Pairs is a little on the short side.

A visual novel about walking a mile in another man’s shoes. On Earth. During an alien invasion.

An alien with sketchy morals craves a human’s heart.
A young man schemes to get his parents back from death.
A mutant tries to figure out where her heart lies with her childhood friend.
An illusionist struggles with his motivations for becoming a hero.

Four stories. Four people. A chance to understand them all.

Like I mentioned, Pairs is a little on the short side since the developers had just one month to complete everything. Of course the team did go back and update the game a few months after NaNoRenO to polish up some of the rougher bits of the game, namely expanding on some of the dialogue and adding in additional character sprites, but, the overall narrative remains largely unchanged. Pairs follows two struggling couples as they attempt to salvage their relationships in the midst of an ongoing alien invasion. Both sets of couples are in a preexisting relationship, so the game just kind of plops you in the thick of it after a very brief world establishing prologue. Play as Noiya (aka Kitten Pink), the daughter of a destructive alien warlord or don the apron of her much bereaved human companion, a baker named James or choose to follow Ricardo and Carmelita hero trainees as they attempt to balance their hero training and their recent relationship upgrade. Four perspectives, two struggling relationships. Is it better for them to stay together or part ways? The choice is yours! 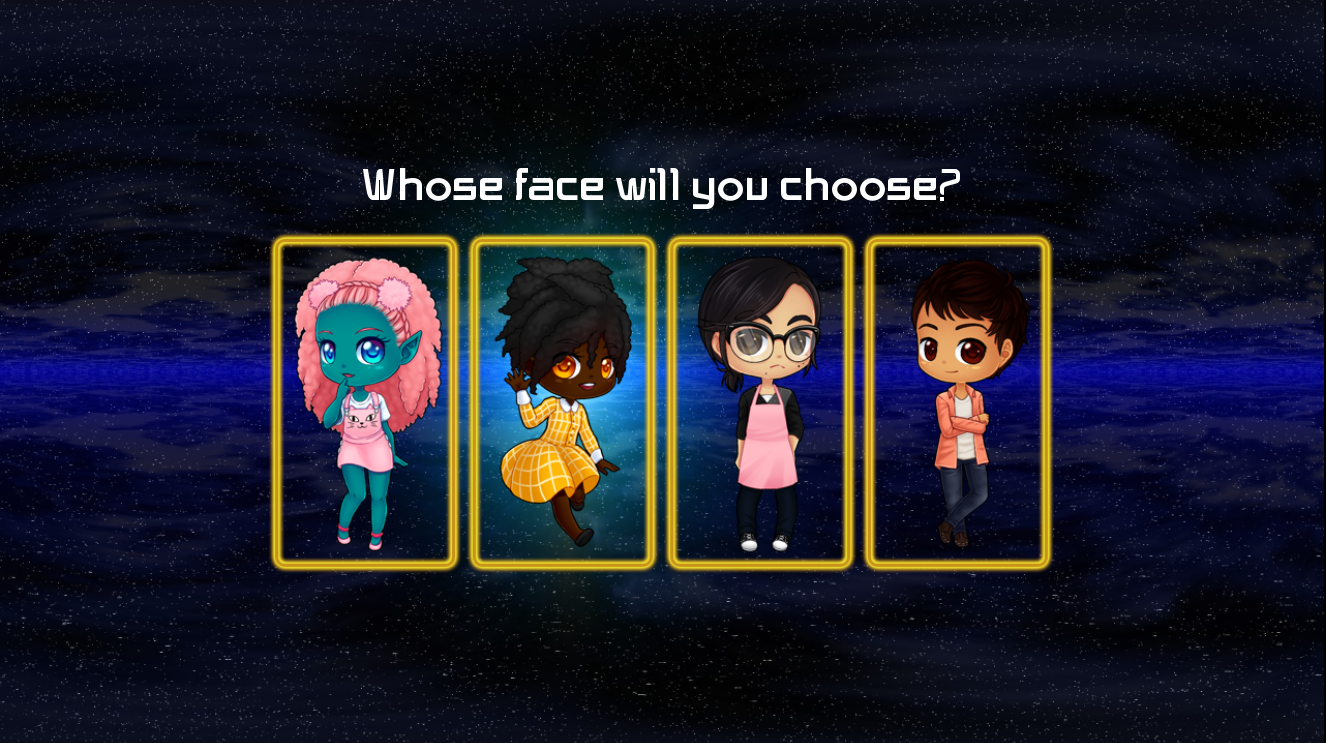 Each route has two distinct endings (one “good” ending and one “bad” ending), but what really sets this game apart is that players can experience both perspectives in each relationship. Usually romance games are pretty one sided, there’s one protagonist, with one perspective with little to no input from the love interests. But, Pairs allows players to see things from both sides and experience each relationship from the perspective of each partner. You’d think playing over the same events would get repetitive, and yet, it isn’t because despite the same events unfolding, you see them through the eyes of each character. Each of the four protagonists has a well developed character with their own unique thoughts and actions that help drive the story along and it’s wholly different from that of their partner.

While both pairs are dealing with different issues in their relationships, the common denominator is that they each have to work with one another to solve their issues. Kitten Pink is the daughter of the Emperor of a warrior alien race and an enemy of humanity. The Naians are hated and many humans are openly hostile towards her, not that her callous disregard for human customs make it any better. On top of that, Kitten has been raised to be a warrior, so she tends to take a shoot first ask questions later approach to dealing with others. On the other side there’s James, a baker working in a local cafe in order to provide for his teenage sister. He’s a relatively normal guy, aside from his association with Kitten… oh and did I mention he is a megane Shade King? He is just so nonchalant about everything, including the fact that he is dating an alien princess! He is just so unfazed by everything, just taking her penchant for violence and bloodshed in stride and it’s downright hilarious. A normal person would be losing their shit at some of the stuff she pulls, but, nope, James treats her like a temperamental kitty. 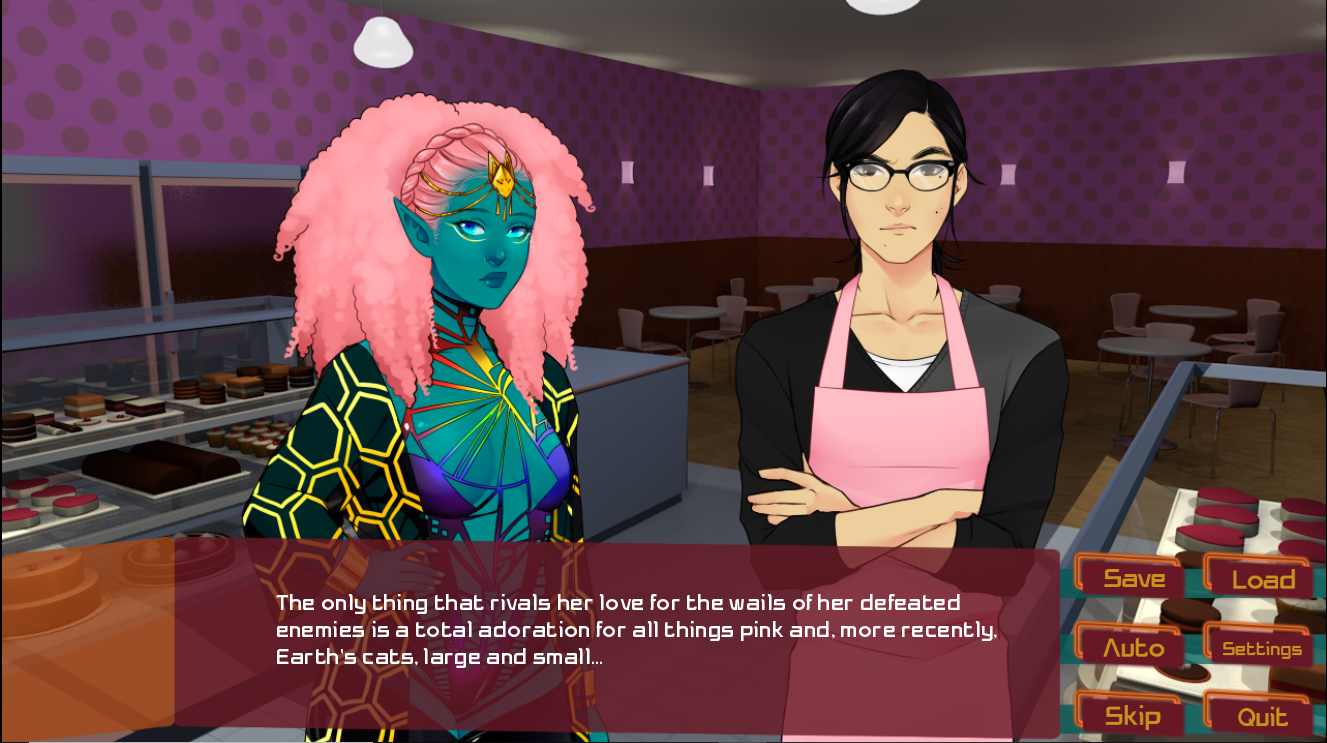 Then there’s Carmelita and Ricardo, childhood friends that recently took the plunge and started dating one another. Trust me, it is just as awkward as you can imagine. Not only that, but they are also Naturals, super powered humans training to be heroes in order to combat the alien threat. Think My Hero Academia but with aliens. Carmelita has the ability to access pocket portals for storage and transportation and Ricardo has the ability to create illusions, a gift he uses most often to alter Carmelita’s appearance. Unlike normal humans, Carmelita has a rather unusual appearance, scales that cover her face and body. Since her appearance could be mistaken for that of the Naians, Ricardo has taken to masking her appearance. Their main conflict is more about balancing their duties as Heroes with their fledgling romantic relationship. Carmelita’s devotion to the Hero cause is often at odds with Ricardo’s rather lax approach to training.

Of the two pairs I liked the James/Kitten Pink routes better, since they seemed to have more at stake than the Carmelita/Ricardo pairing and I felt the alien/human relationship issue was a bit more compelling than the best friends to lovers narrative. In fact, I wouldn’t mind playing a game with just those two navigating their vastly different cultures and the effect that has on their relationship. That’s not to say that the relationship between Carmelita and Ricardo is not interesting in its own way, rather, it’s much more grounded within the realm of reality than the other. Which given the sci-fi setting of the game doesn’t really do it for me, though I will admit that a game focusing on the Hero academy would be much more interesting from a narrative perspective.

I love the premise, a sci-fi fantasy romance set in the midst of an alien invasion, it opens up the game to a lot of unique possibilities and scenarios. Each element of the world is well developed and had this have been a longer game, I’d have loved to learn more about it. The Naians, their conflict with the humans, hell, even the hero training program, on their own each of the individual plot points has the potential for even more stories to be told. The team is even working on another game set within the same universe with different characters and from what I’ve played of the demo this is going to be good!!

While it is not without it’s shortcomings, fans of sci-fi and fantasy will fall in love with this Pairs and its richly developed world with a diverse cast of characters. Fans of romance games will enjoy the unique perspectives of each of the four protagonists both insightful and a lot of fun to explore. All in all, Pairs is an enjoyable sci-fi romance with immense potential for more content in the future. And I for one can’t wait to see what else this development team has up their sleeves!

But, don’t just take my word for it! Check out the game over on itch.io! If you like what you see, play the game, hit the like button, share, or comment! As always, Thank You for Reading!!

You can also contact the Pairs Team on Social Media through the following channels:

One thought on “Romance Woes Amidst an Alien Invasions – PAIRS Review”