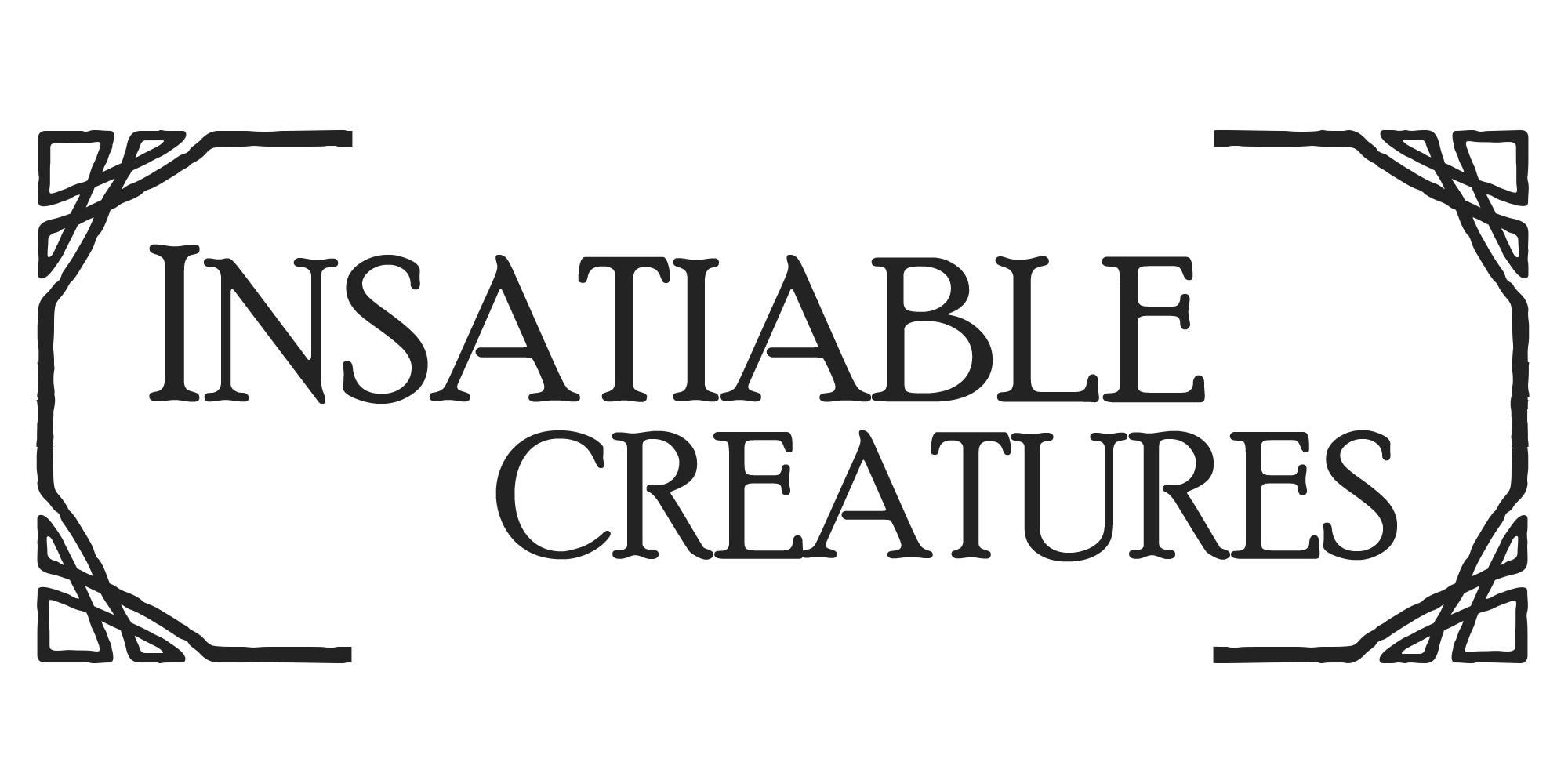 Insatiable Creatures is a short comedy, suspense kinetic novel created by PB & Jelly for the one month gamejam, NaNoRenO 2017. This is a free game and is playable on Windows and Mac operating systems. The game is roughly 15 minutes long, with two main characters and features full English voice acting. 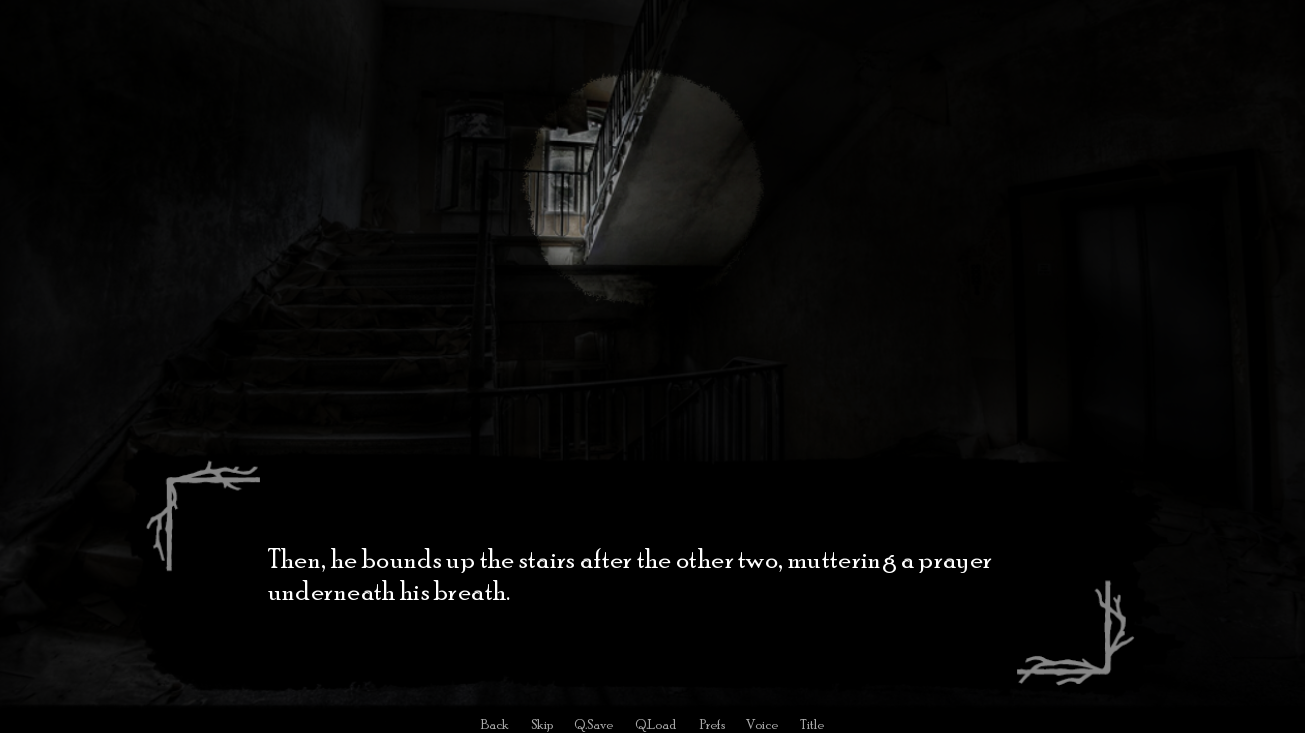 Insatiable Creatures tells the story of a TA, Lucas who is asked to investigate the site where four high school students mysteriously vanished. He reluctantly takes on the task, but what he finds is a bit more than he bargained for…

Since developers only have a month to create these games, I will be a bit more forgiving of these titles’s shortcomings, however, that doesn’t mean I won’t give you guys my honest opinion in each review.

When four high school students go missing after exploring a local haunt spot, Mythology teacher Thalia senses that supernatural forces are the real cause of the disappearance. Too busy (or perhaps lazy) to investigate herself, she bribes her apathetic TA to examine the scene for clues. Lucas approaches the task with his usual sluggish indifference, but even he is astounded by what he uncovers.

This game is super short, but, despite not even making it to the half hour mark, I found this kinetic novel to be immensely entertaining. Unlike visual novels that rely on choices to help determine the course of the story, Insatiable Creatures follows a linear plot with no interaction from the player. Since kinetic novels lack the player interactions common in traditional visual novels, they tend to be much shorter in length and rely solely on the characters to carry the plot, and that is where Insatiable Creatures excels. 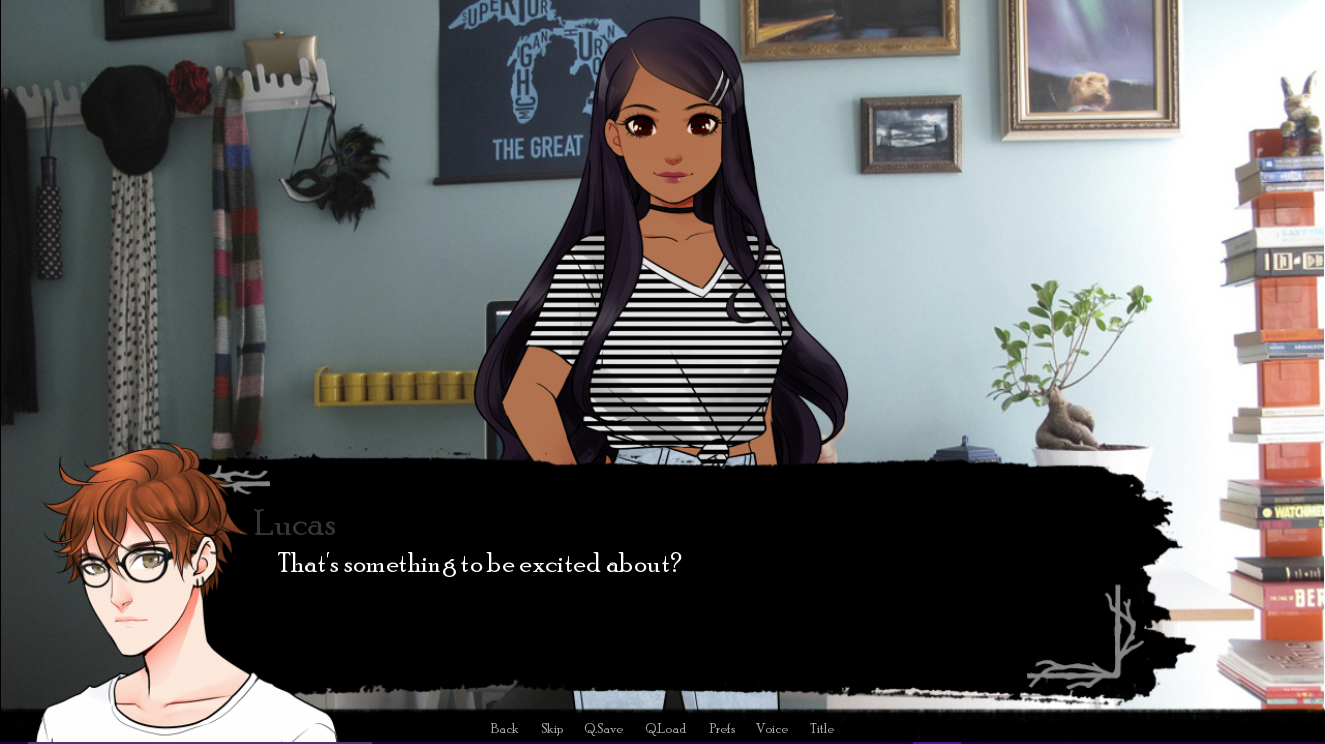 There are two main characters, Thalia a Mythology professor who moonlights as an amateur paranormal enthusiast and protagonist Lucas, an aloof TA that would like nothing more than to mind his own business, maybe play a few games of solitaire on his laptop. I loved the characters in this game, especially Lucas, I have to give to the PB & Jelly team, they managed to create a pretty relatable protagonist. It’s not often that I am on the same wavelength as the game’s protagonist, but with Lucas, every reaction was 100% something I would have said or done if I’d been placed in the same situation, and it was oddly refreshing!

So, the story, this starts off as a supernatural investigation kinetic novel and within a matter of minutes transforms into a legitimate horror story, only to hit you with a hilarious M. Night Shaymalan twist.  I will admit that they got me with the twist, I was so engrossed in the story that I did not see it coming at all. I won’t spoil it for you because, it’s comedy gold, but, just know it’s the only way this game could have ended!

Last but certainly not least, the features… This is a kinetic novel so not much in the way of special features, however, the game is fully voices and the VA’s (James Cheek for the male voices and Jill Harris for the female voices) did a fantastic job! Not only were they voicing the main characters Lucas and Thalia, but they also voiced the side characters as well and the range on both of them was always spot on!

The game mostly used free assets, but everything was clean. The writing had it’s shortcomings, but I really loved the witty banter between Lucas and Thalia. The story is told in the third person for some parts and the switch between the narration and the dialogue was an interesting choice, kind of like reading an actual novel, which worked well given the context of the game.

Since, this is a special NaNoRenO game review, I will do something a bit different than what I normally do, instead of the gifs, I’ll just highlight the Positives and the Negatives of each game. But, be warned the Negatives will more often than not be related to time constraints.

Overall, PB & Jelly did a fantastic job with this game! I’m usually not a fan of kinetic novels, since I prefer a much more interactive gameplay experiences, however, the premise and characters really sold me on this game. My only complaint is that I wish PB & Jelly could have fleshed out the characters a bit more, but like with most of the NaNoRenO games, Insatiable Creatures is a victim of it’s short run time, which is a shame since the premise and characters are really interesting. Perhaps they might consider expanding on the story in the future, because this is too great a concept to not be used again. Insatiable Creatures is more of a prelude to a much longer work, rather than a solid stand alone piece, but what they do have they do well and it is more than enough to warrant a playthrough!

Expect more NaNoRenO 2017 reviews in the near future. What did you think of Insatiable Creatures? Have you played any of the other NaNoRenO 2017 games? Let me know what you think in the comments section. If you like what you see, like this post or follow Nice Job Breaking It, Hero! As always THANK YOU FOR READING!!