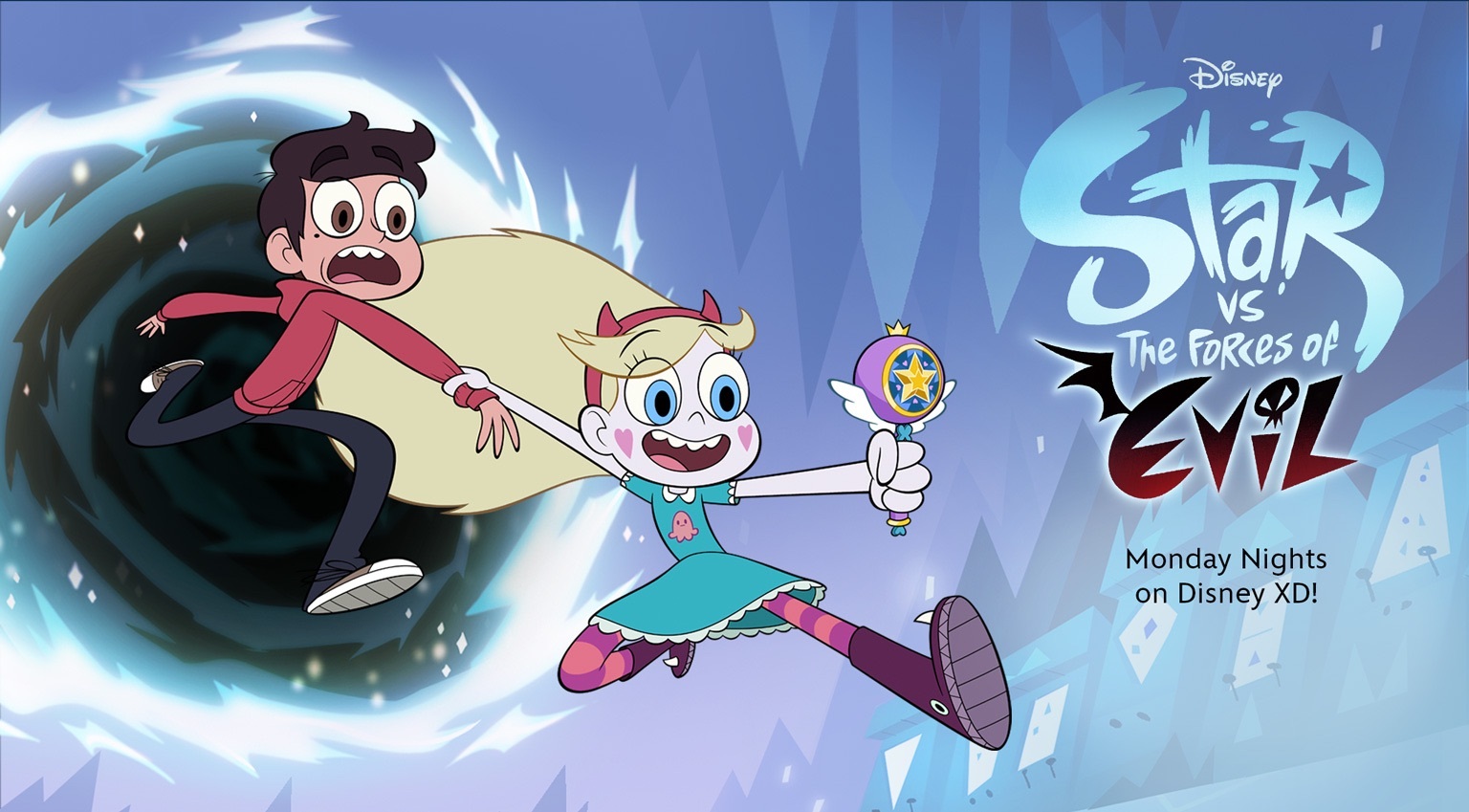 Some of you should recognize Star as the topic that didn’t win last week’s Twitter poll, but I absolutely adore this show, so I figured why not cover it this week instead! Since the second season wrapped up a few months ago I am seriously suffering from Star withdrawal… so I hope this post will hold me over until the season 3 premiere later this Summer…

When magical princess Star Butterfly receives a royal magic wand for her 14th birthday, she proves to her parents that she is not ready for the responsibility that comes with it. As a result, they send her to a place that doesn’t have magic — Earth — in hopes that she will gain maturity. Upon her arrival, Star is given a family to help guide her, so she moves in with the Diaz family, which includes teenage son Marco. Star takes Marco with her as she battles villains — both in their high school and throughout the universe — as she attempts to protect her powerful wand.

Star vs the Forces of Evil is an ongoing animated series currently running on Disney XD, with a total of two seasons under its belt (it has since been renewed for a 3rd and 4th season). Disney has put out a host of memorable shows and films over the years, but there’s something special about this next generation of animated shows that has attracted viewers from outside the target demographic and I sincerely hope they keep it up! Not only does the show feature a strong female lead (Star Butterfly voiced by Eden Sher), it also portrays a non-romantic (at least at the start of the series) between Star and her best friend Marco Diaz (voiced by Adam McArthur), and even after their relationship takes a more romantic turn it doesn’t seem forced or out of place… which sadly isn’t the case with some shows out there.

Of course a lot of this magic can be attributed to the show’s creator, Daron Nefcy, the second woman to create an animated series for Disney. Nefcy credits popular anime series such as Sailor Moon,  Magic Knight Rayearth, and Revolutionary Girl Utena to name a few, as the inspiration for the show, so it’s no wonder the show has such a phenomenal leading lady!

Star Butterfly isn’t your typical magic wielding princess, she doesn’t sit by the wayside attending to court affairs, she’s out there getting dirty and kicking some serious monster butt! She marches to the beat of her own drum and as far as rules are concerned, this little lady creates her own rules. Star isn’t perfect, she has flaws and most of the time it’s her shortcomings that lead to most of the conflicts in the show… and yes, while she does ultimately learn from her mistakes by the end of the episodes conflict, she does it her way.

Now, that doesn’t mean that the Star way is always the best way, more times than not she causes more harm than good… and that’s okay, Star is still learning to come into her own not just as a magic wielder, but as a princess. Her journey over the course of the series mirrors that of a lot of folks out there whether you are a teen trying to navigate high school or an adult trying to figure out what your next move is, Star teaches viewers to be true to themselves in the face of adversity… and that’s why I like it so much. Beneath the laughter and the jokes is a show with a rather deep message, that definitely resonates with viewers of all ages! I can’t wait to see what happens with Star and the gang in the future seasons, last season dropped some huge bombshells… like HUGE, story altering reveals! But, we’ll just have to wait until the season 3 premier for some answers…

Welp, that’s all I have to say about Star vs the Forces of Evil. Have you seen the show? What do you think about it? Let me know what you think in the comments section. If you like what you see, like this post or follow Nice Job Breaking It, Hero! As always THANK YOU FOR READING!!

12 thoughts on “Fangirl Moment: Star vs the Forces of Evil”