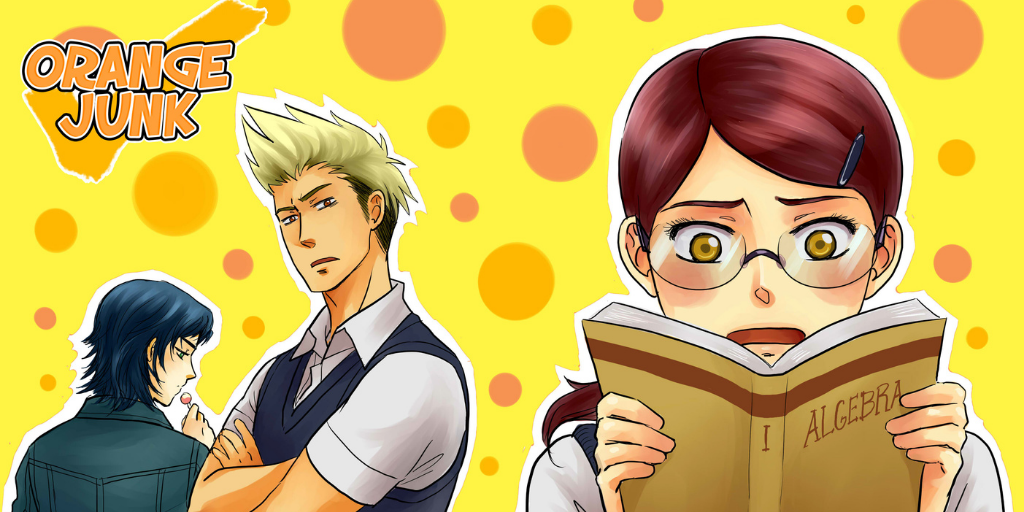 TGIF! Here we are again with another Fangirl Friday! Last week I covered a webcomic I had just recently discovered, this week I’ll be covering one that I’ve been following for over a year! The comic I’m covering this week is Orange Junk, a  slice-of-life, romance, comedy webcomic series by Heldrad.

When Louise’s wealthy family loses everything, she has to pull herself up by her bootstraps and start over in a new high school – where the smartest boy is the meanest, and the hottest boy is the weirdest. But Louise needs tutoring, so the three become a team… It’s a riches to rags school story with a whole lot of screaming.

In the past I had read some of Heldrad’s previous works, namely Silent Melody, so I was already privy to her engaging story telling and  her ability to create dynamic characters… So when I picked up Orange Junk a little more than a year ago, I knew I was in for a good story, I just didn’t know how good! Every so often you come across something that exceeds all expectations, Heldrad’s comic, Orange Junk did just that. Reviewers have called OJ an “ode to shoujo manga” due to it’s flawless use of common shoujo techniques and tropes, but that isn’t even the half of it. OJ does borrow a great deal from traditional shoujo rom-com manga series, but it’s strength comes from it’s ability to turn the genre on its head! Heldrad doesn’t just mimic common shoujo tropes, she builds on them creating something entirely new and surprisingly fresh!

When I first read this series, I blazed through the available pages in a matter of days, savoring each and every minute of the story. I can’t tell you guys how many times I hit the F5 key during that time… The art is gorgeous, with it’s stellar character designs, floral inlays, and stylized text boxes, you can really tell that the author did their best to set the reader up for a traditional shoujo manga experience. But, OJ’s biggest strength lies in it’s main cast; newly broke Louise, hotheaded genius Bruce, and handsome cloud cuckoo-lander Drew. Each of these characters drives home the over arching theme of the comic, which is that you can’t judge a book by it’s cover. Heldrad takes the same character tropes that we are familiar with in other works and adds her own spin on it making for a deliciously fun read.

Orange starts off as a slice of life high school comedy, the first half of the story following Louise as she adjusts to her less than affluent circumstances. But, as the story unfolds, Heldrad expands the scope of the comic, incorporating elements of drama and romance while still retaining the comic’s original comedic undertones. While romance does play a role in the overall development of the story, the author puts much more emphasis on the characters and their individual stories and motivations. Each character is given a chance to share their own story throughout the work and it’s refreshing to read a comic that doesn’t delve too deeply into the sugary sweet world of high school romance. But, don’t worry, OJ has it’s fair share of awkward glances and blushing… just don’t expect any big romantic confessions anytime soon. 😛

I have been following this series since its humble beginnings on Smackjeeves all the way to it’s new home at Sparkler Monthly. This comic has been a welcome treat from the first page all the way to the most recent updates. Orange Junk is a fun slice of life comedy with the soul of a Japanese shoujo manga and a whole lot of heart! I highly recommend reading this comic! It’s perfect for fans of fun, uplifting stories with a rom-com swirl!