So, I had a really hard time coming up with an answer to today’s prompt… In fact, I almost decided to skip it altogether, but then a light bulb went off in my head and I knew just which villain I was going to write about!

I’m the type that likes my villains to be completely evil, with no redeeming qualities whatsoever! I mean, what’s the point of being a villain if you’re going to have a change of heart in the end? I feel like doing that ruins the purpose of a villain, which simply put is oppose his or her protagonist while stepping on as many little people as they can along the way. Well, I think I outdid myself with this pick, this villain is equal parts crazy and equal parts despicable! My pick for best anime villain is… 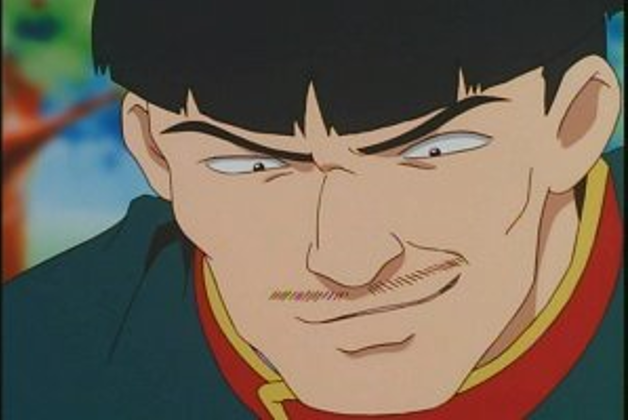 Before I go into what makes Hamdo the best of the worst, I have to first give some background on Now and Then Here and There. The follows a young boy named Shu, who witnesses a young girl, Lala-Ru being attacked by a mechanized dragon. In an attempt to protect her, he finds himself accidentally transported to a desolate futuristic world, where water is a scarce resource. He learns that Lala-Ru possesses a pendant linked to a water reserve along with the ability to manipulate water itself. Because of her abilities, Lala-Ru is sought after by Hamdo and his band of soldiers, who seeks to use her powers to control the world.

Hamdo is obsessed with water and by extension Lala-Ru herself, stopping at nothing to realize his goal of total world domination. Hamdo and his men raid and pillage neighboring villages for resources, they even abduct children to add to their army. As if child abductions weren’t bad enough, Hamdo suffers from extreme mood swings. One minute he’s a calm and composed man, able to curry the favor of his supporters and troops. The next he’s an erratic tyrant, blindly lashing out at anyone that stands in the way of his goals, be they friends or enemies. Even now I still remember the scene when he lets loose his anger on a poor defenseless cat *shudders* it’s pure nightmare fuel!

Throughout the series Hamdo alternates between various manic episodes interspersed with brief lucid moments, which all but disappear as the series reaches it’s conclusion. Hamdo is the kind of villain that just makes you feel dirty, there is nothing redeeming about this guy. Sure you can make the argument that his actions are the result of his psychosis, but that wouldn’t be altogether true, Hamdo was corrupt long before his madness took hold. In a series know for being tragic, Hamdo is by far one of the biggest tragedies of them all.

What do you think of my choice? Who is your favorite anime villain? Feel free to let me know in the comments section! As always THANK YOU for reading!!!