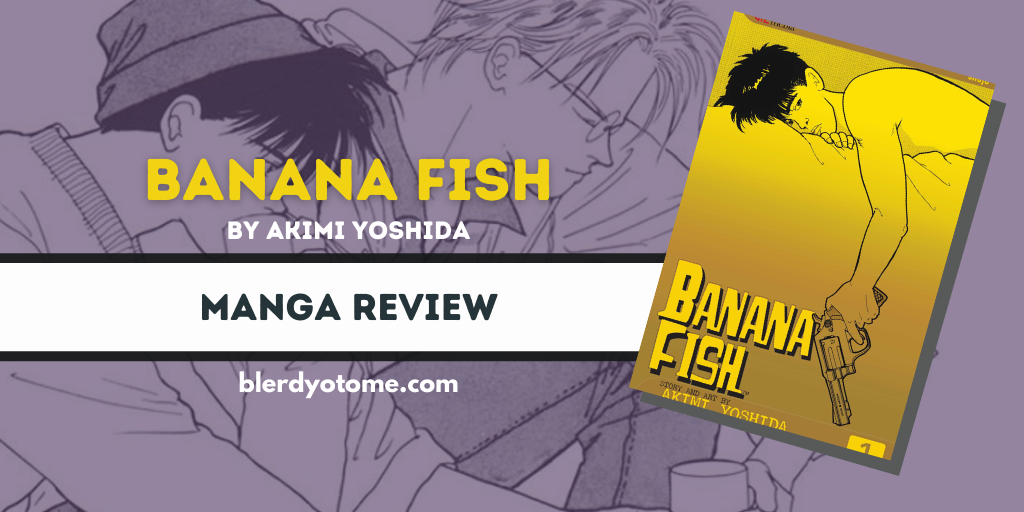 TGIF! Here we are again with another Fangirl Friday! This week I’m reviewing a genre fluid manga…technically it’s a shojo manga, but you wouldn’t think it to read it. This manga has everything, gang battles, political deals, mysterious drugs, romance (?), drama, angst, tragedy, and to tie it all up, subtle (like really subtle) BL undertones. The manga I’m about to cover is my favorite series of all time. No matter how much time passes, and no matter how many manga I read, nothing has even come close to it! The series is licensed in English by Viz, but it is currently out of print! I have searched conventions, old book stores and online…and I still don’t have the whole series yet….soon though!

Banana Fish, a 19 volume classic manga series by Akimi Yoshida, was released between 1985 and 1994. The series was immensely popular in Japan, spawning three spin-off stories: Private Opinion, Angel Eyes, and The Garden with Holy Light. The musician, Gackt loved this manga so much that he wrote a song about it entitled Asrun (Aslan) Dream (it’s really good too)! This manga really took me by surprise, the artwork while rough at first really grew on me, and the plot…wow…this is not your typical shojo manga, it transcends genre labels! While this post will be Safe for Work, I do need to clarify that this manga does have some content that may not be suitable for some readers. However, none of said content takes away from the plot in any way, in fact it only enhances it!

I can’t for the life of me remember how I found out about this series, all I know for sure is that this series has left a lasting impression on me. I have never been so moved by a manga series in my life (up to this point), I bawled for days after finishing this series…DAYS! I still can’t read the end of this manga, it brings back so many emotions, I just can’t deal with them all!

Nature made Ash Lynx beautiful; nurture made him a cold ruthless killer. A runaway brought up as the adopted heir and sex toy of “Papa” Dino Golzine, Ash, now at the rebellious age of seventeen, forsakes the kingdom held out by the devil who raised him. But the hideous secret that drove Ash’s older brother mad in Vietnam has suddenly fallen into Papa’s insatiably ambitious hands–and it’s exactly the wrong time for Eiji Okamura, a pure-hearted young photographer from Japan, to make Ash Lynx’s acquaintance…

Aslan is a  young and powerful gang leader from New York, and Eiji is a naïve photographer from Japan. Chance brought their vastly different worlds together, but it’s fate that leads them down a path neither would have ever expected. The relationship between these boys only lasts for a short time, but in that time they build something that transcends reason or explanation. They strike up an instant friendship, each seeing something they lack in the other. The lines of friendship blur as both boys rely on one another as they discover an inner strength they never knew they possessed. Is it love? Is it friendship? Who knows…who cares? What Eiji and Aslan have is beyond common terms. The romance between the two leads is only hinted at, it isn’t the focus of the narrative. Instead it’s the characters that drive the story.

Ash, hardened by his experiences, is on the verge of becoming the very thing he fears, a heartless monster. He fights to stay true to himself as past and present collide, with disastrous results. He lacks balance, as his inner demons and external forces keep him on the offense. But, he isn’t a mindless brute, Aslan possesses brains far beyond his years and light years beyond the current time. He doesn’t fit the typical image of an up and coming crime boss, there is a beauty to this beast. He kind of reminds me of Dorian Grey in that, despite his outward appearance there is darkness that resides within him. Damaged doesn’t begin to describe Aslan, when Eiji meets him, he is almost beyond help. Seasoned by his past, he uses his unique abilities to get ahead in a world where one misstep can lead to death. In fact, Aslan is ready for death, he expects it, live fast die young is the mantra on which he has based his entire life. But, there is a nobleness to him, standards which retains even as his hands become soaked with the blood of his enemies.

Almost as if to serve as Aslan’s foil, Eiji possesses everything good and innocent in the world. Eiji is like the beacon of hope after Aslan’s long dark journey. He finds himself drawn to Eiji like a moth to a flame, which confuses those around them. Eiji’s presence brings little light back into Aslan’s life, his very existence reminds him that there is still good in the world. Eiji, signifies the future for Aslan, giving him hope for a life outside of the criminal underworld. He convinces him that there is a calm after the storm. Eiji grows immensely through his friendship with Aslan and his experiences in New York. He gets pulled into the dark underbelly of humanity, but he never loses hope. He loses his naivete, but he never loses sight of his sense of self. Even as time passes and he puts that chapter of his life behind him, he never forgets.

The plot of this story is always moving and at first it’s a little hard to keep up with it all. The author throws a lot at you at once, but that by no means makes it any less engaging! This manga takes the traditional coming of age story and turns it on it’s head, blending mystery, suspense, comedy, drama, social commentary, and tragedy seamlessly, into a magnificently woven work. I fell in love with this story and the characters in it. The cast of characters, both main and side alike are all unique and dynamic. They bring a richness to the plot and serve to enhance the main story from arc to arc. The author develops everyone equally such that you find yourself becoming engrossed in each and every story and side plot. You become a part of the narrative, their successes are your successes, their failures your own. I was so personally invested in the characters that I was sad to let them go in the end. 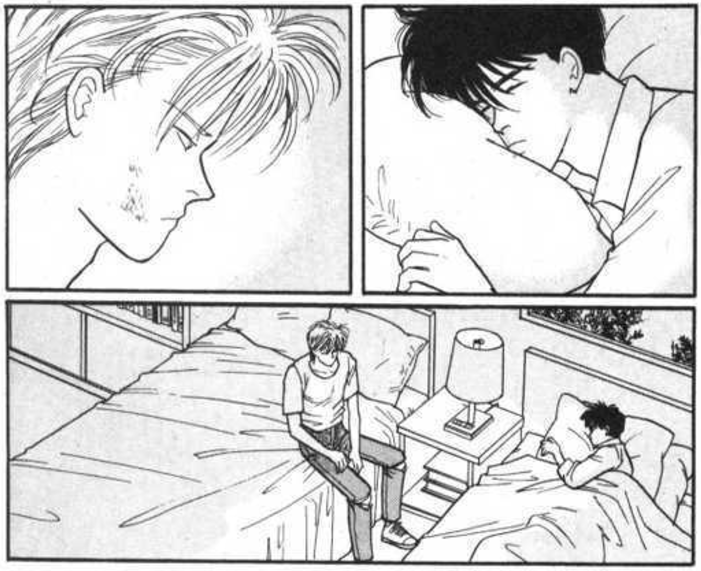 If you are looking for something full of fluff and happy endings, this is not the manga for you. Banana Fish is gritty and dark, it will have you on the edge of your seat with each turn of the page. I must warn you that this is a tragedy, so characters do die…I won’t say which ones, but when I got to the ending I cried like a baby for a whole week. I’d be in class solving quadratic functions or at work making a latte, when I’d think about Banana Fish and the waterworks would start all over again. Even to this day, I still get teary eyed just thinking about it! But, life goes on, and the author gives the reader a sneak peek into the lives of the characters post story….and man have they grown! But, even after all is said and done a piece of that time remains lodged in their hearts, just like this amazing series will remain with you…long after you turn the last page.

I try to keep my Fangirl Moment posts under 500 words, but I just couldn’t for this one, I went well over that self imposed limit… and no matter how much I wrote, I still don’t think I can ever do this series justice! Everyone should read this manga at least once in their lives. There is no right audience for this manga, because it appeals to everyone. Lovers of great stories, dynamic character, and gritty situations should absolutely read this series!

Below is an unedited review I wrote for the manga back in 2010, right after I finished reading it for the first time:

I just finished Banana Fish…and i’m still crying…at first i was wary due to the Shounen-Ai (i mean come on all or nothing)…but Eiji and Ash’s relationship was more than that…Ash was a product of circumstance…and Eiji was like a fresh breeze…he swept Ash up and just gave him a purpose…their friendship (and i use friendship…but it was more than that…) was not a weakness, well maybe at times it was, but a redeeming quality for everyone…

At times i found myself laughing at Eiji’s broken english….and Max and Jennifer…i especially felt close to Sing…but that is another story all together…ha ha ha…but that end!!! i could not stop crying…i just…that was, just too much…i mean it hit me but i couldn’t absorb it until i read the last bit with Akira and Eiji and Sing…then the tears hit me and i couldn’t stop…

The Plot…i read 5 volumes after class…and had to FORCE myself to stop….at 3 AM…ha ha ha but i mean you lose track of time….you get so caught up that you forget it is just a manga…I’m from NY and i couldn’t help but remember all the places there and the people…

the author painted a beautiful work that i may never read again, not because it was bad, NO, but because it was on of those things that when you know the end it is hard to go back to the beginning and get that same feel, quite frankly i think knowing what i know now….i would read it and stop halfway…i don’t think i can handle that end twice….

I wish i could vote it higher than 10/10…I HIGHLY RECOMMEND THIS MANGA!!!