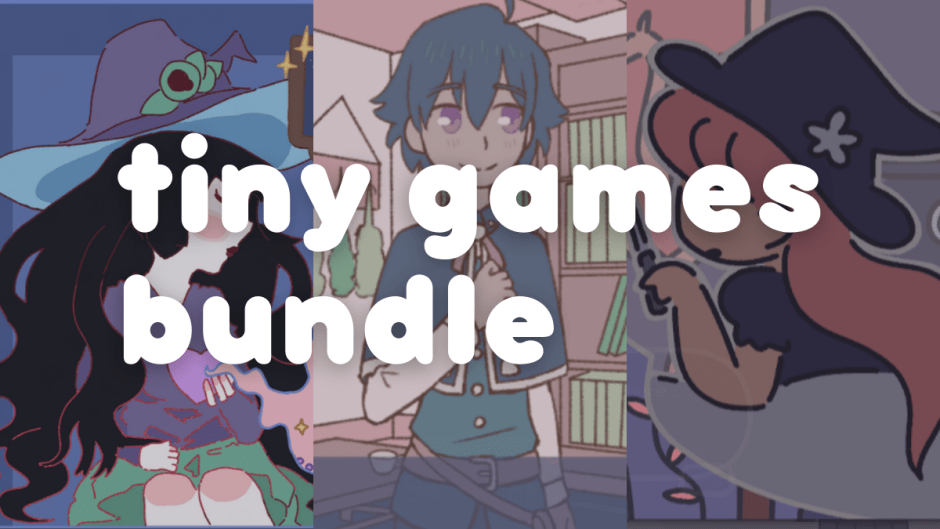 tiny games bundle is a collection of themed short games by a team of itch.io creators. Their objective is to support small creators and normalize the idea that tiny games have value.

Shorter games provide a space for creators to explore unconventional ideas. They give players a chance for concise and unique gameplay experiences that can only be made by creators with the freedom to experiment.

They want to encourage people to support the creators of shorter games so that they can continue to make more tiny experiences for people to enjoy. Each game is playable within half an hour. The bundle is just $10.00!

The bundle’s theme: tiny games to make magic with ✨

Disclaimer: After publishing this article, there were allegations brought up against one of the developers featured in the tiny games bundle. This post is an objective overview of the bundle and not an endorsement of any wrongdoing on the part of the developer in question. Please respect my space by not using my accounts/platform as a means to voice your concerns to the creators of the bundle.

Games in the Bundle

Have a crystal ball date with your witch girlfriend in casting hearts, a long-distance visual novel about magic, anxiety, and connection.

It’s your girlfriend’s birthday, but you can’t meet up in person. Try to make the best of things so that the night can still be a magical one.

casting hearts is by npckc (story, art, code) and sdhizumi (music). They often work on tiny games together as a developer and composer combo, with their recent title A YEAR OF SPRINGS available on itch.io, Steam, Google Play, and consoles. Their games have been featured at events such as Tokyo Game Show, the Electronic Literature Organization conference, and the Overkill Festival.

You are Milo Poppydash, student at the prestigious Halfmoon Academy for Witches. Your best friend is Atlas Galecrown, fellow student at the Academy. You have a crush on him.

Atlas finally asked you out! Only problem is you immediately embarrassed yourself and now you can never face him again or die of shame.

Your only option? Steal the Time Acorn, go back in time, and relive the day until Atlas asks you out again!

Drinking Tea (with the Trans Boy You Secretly Have a Crush On) is made by clover (@cloverfirefly).They are an illustrator and game maker hailing from the Pacific NW. clover has created many small narrative-focused games including Rose Knight and Thorn Witch, Vampire Night Shift, Cat Boy’s Stellar Journey and My World Still Burns.

Their work has been featured in the Seattle Indies Expo and the PIGsquad Drink n Draw as well as other local game dev events.

A lonely witch finally completes her prized creation after years of mischievous preparation… and it’s cuter than she ever imagined!

Follow her, her homunculus, and a forgotten friend in this informative course about emotions and magic 🔮🌜

Making Friends is a collaboration between Autumnotopia and Elita, a duo from the PNW who are active in local indie game dev scenes.

Together they’ve made tiny games about a variety of subjects, including: dodging stuff while being gay, getting trapped in space with a killer monster, and hypnotizing eldritch gods for fun and profit.

Final exams day has arrived at St. Bertrude’s Academy of Magic and Witchcraft, and there’s no doubt that you’re going to graduate today! You’re The Self-Made Witch after all; everyone’s rooting and cheering for you~

Except uh, Sage. They’re just like that though. Don’t worry too much, they’re harmless. You’ll graduate together, won’t you?

Cast spells on a large cast of quirky NPCs in Tomorrow for Mar, a 2.5D VN about the trials and tribulations of university, university tests and those pesky uni crushes. Mar needs to collect three potion ingredients in order to pass their final, but they get paired up with their longtime crush to do so! Cast spells, collect ingredients and confess!

Tomorrow for Mar is made by solo dev Heiden (art, writing, programming). Heiden has released more than 10 games (Dr. Frank’s Build-A-Boyfriend, A New Don, Kill the Prince?!) and has been featured in the Smithsonian’s SAAM arcade as well as multiple Oxford University Press publications.

tiny games bundle is a collection of themed short games by a team of itch.io creators. Our objective is to support small creators and normalize the idea that tiny games have value. Each of these games was created with love & care for a tiny experience you can enjoy within half an hour.

The bundle also comes with a set of trading cards for the games to keep even after you’re done playing!

5 thoughts on “Check out the Tiny Games Bundle—A collection of short games by tiny game creators!”