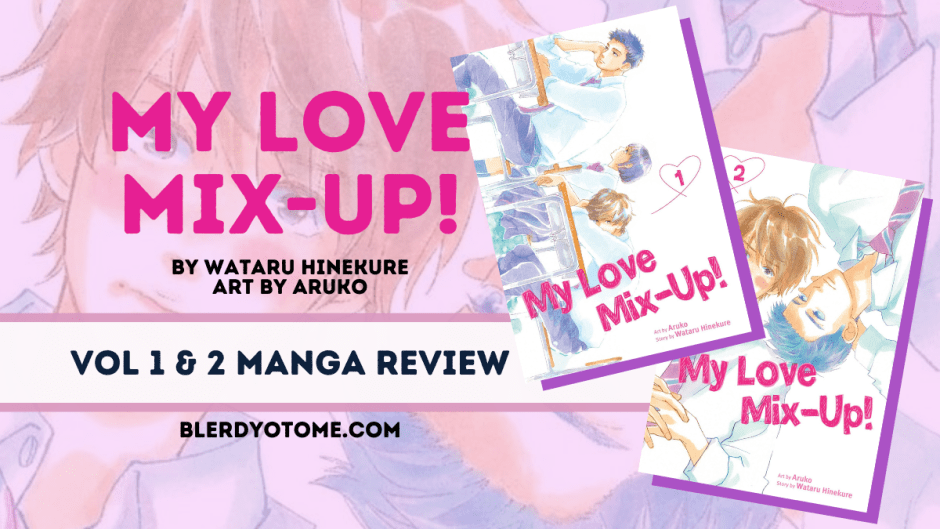 My Love Mix-Up is a wholesome shojo rom-com by Wataru Hinekure, with art by Aruko, published in English by Shojo Beat. In this super cute series, an eraser and a small misunderstanding lead to a budding romance between two high school boys!

It’s been awhile since I’ve gotten this excited about a high school rom-com, probably because let’s face it, I’m so far removed from high school that I find most of them maddening to get through. So, I didn’t expect much when I picked up the first volume of My Love Mix-Up!–I figured at most if I didn’t like it I’d be out ten bucks, which isn’t too bad when some manga will set you back $20. And then I read it and, I can honestly say, I am obsessed with this series!

My Love Mix-Up proves that you don’t need much to tell a really cute story. The series follows Aoki, a high school boy who has a crush on the cute girl, Hashimoto who sits in the seat next to him. Just when he thinks he’ll spend the rest of his days pining for her in secret he gets the chance to finally talk to her when he borrows her eraser for an exam. But, his hopes are dashed when he sees that she has etched the name of another boy, Ida, on it. Conveniently enough, Ida sits in the seat in front of him and when he sees Aoki with the eraser he mistakenly believes that Aoki has a crush on him. Instead of clearing things up, Aoki decides to just roll with it, and so begins this crazy and often hilarious mixed up rom-com.

The bulk of the story focuses on Aoki and Ida’s relationship, which despite the initial misunderstanding does (albeit slowly) develop into something surprisingly genuine. This could have easily been just another cliché shojo love triangle mess, full of unnecessary angst and drama, but surprisingly My Love Mix-Up is a charming, funny read that’ll have you rooting for everybody to get their happily ever after.

There are no catty love rivals or ridiculous arguments, just a group of cinnamon rolls fumbling their way through first love–and you will love all of the characters in this series! Aoki is a loveable emotional cinnamon roll, who must be protected at all costs! Ida is a stoic, popular guy, who genuinely makes an effort to understand those around him. Hashimoto is a sweet girl who cares about her friends, but isn’t above (literally) slapping some sense into them from time to time. Finally, there’s Aida, Aoki’s oblivious best friend, who means well, but sometimes puts his foot in his mouth. Every character is perfection and I love that the series takes the time to show them interacting with each other as regular high school students–whether that’s painting sets for the upcoming school festival or studying for an exam.

While My Love Mix-Up! isn’t marketed as a BL series, I do like how well Aoki’s budding feelings for Ida are handled in the story. Aoki definitely has a go of it coming to terms with his growing crush on Ida, but at no point does the series devolve into the usual “But, I’m straight, I can’t be in love with a guy” trope that you see in a lot of BL series. Ida takes Aoki’s confession in stride and actively attempts to become friends with Aoki and when Aoki confides in his friends about his feelings they’re super supportive. In fact at no point does anyone call Aoki weird for crushing on another guy and that is just so refreshing!

Of course there are more than a few highs and lows in the first two volumes, but overall My Love Mix-Up! maintains a pretty lighthearted tone and I can’t wait to see where Aoki, Ida, and the rest of these adorable characters wind up as the series progresses. This is one of the most wholesome manga series I have read in a long time and I demand that everyone give it a read! Volumes 1 and 2 are available in English!

P.S. If you’re like me and you can’t wait for the next volume, there’s a drama series adaptation on Viki that’ll tide you over between releases!

Where to Read My Love Mix-Up