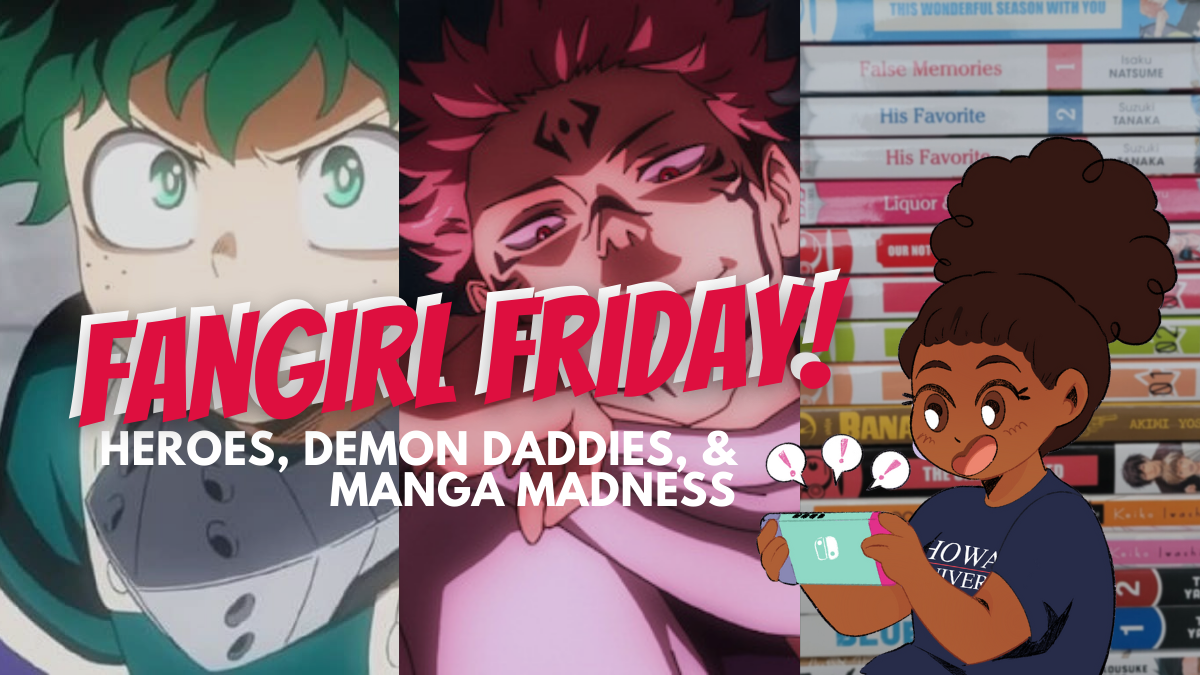 Hey Blerdy Tribe, how’s your week been? We finally made it to Friday and let me tell you this has been one hell of a week, so ya girl is ready for the weekend! We have this big conference coming up at work next week, so there’s been a bit of an upswing in the amount of requests I’ve had to deal with at work and some of them range from the bizarre—like conspiracy theories about COVID-19 to the mundane—help logging into a member account. It’s a mixed bag, but it definitely makes the work day exciting! So, after a long day of adulting I like to spend my spare time doing things that help me de-stress… like fangirling~

Fangirl Friday isn’t a new feature, rather I’m taking an old segment and putting a bit of a spin on it! Instead of talking about just one topic, this’ll be a space for me to talk about all the stuff I’ve been getting into, ya know aside from playing games! And this week I’ve been catching up on some anime watching and buying manga to fill out my collection! 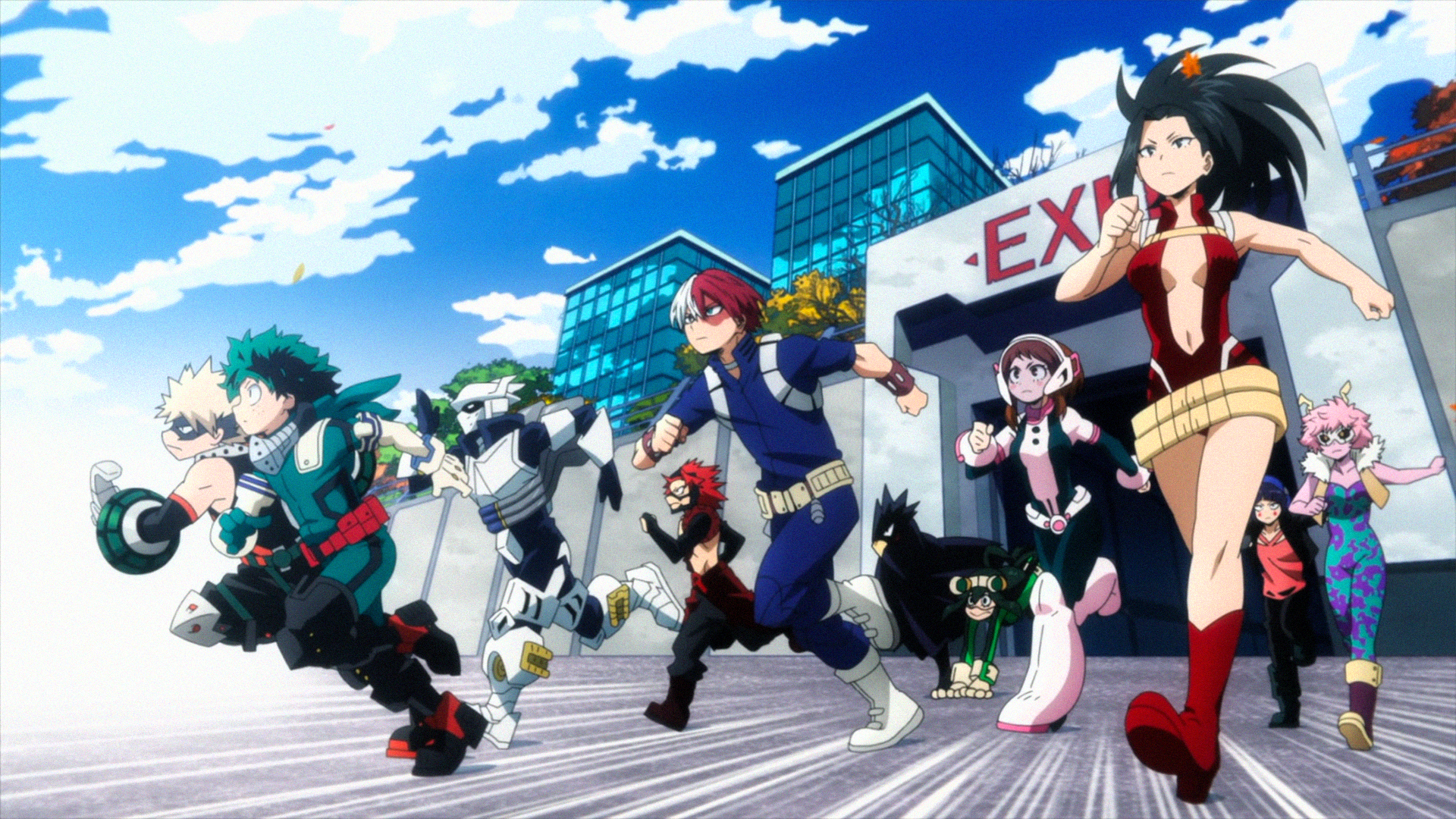 It’s no secret that I am the absolute worst at keeping up with anime. I’m always at least five seasons behind the rest of the fandom and I tend to get distracted easily so, even if I’m really into a series I eventually wind up just dropping it to do something else (read: play a game). But, when I do finally sit down to watch an anime, that’s it—everything else gets put on hold till I finish. And that’s kinda what happened with My Hero Academia , for some reason, last week I decided to finally catch up on the entire series and conveniently I finished catching up in time for the release of the latest episode. AND I CAN’T FOR THE LIFE OF ME FIGURE OUT WHY I STOPPED WATCHING IN THE FIRST PLACE!?

From the very first episode I started getting super fired up about the story and the characters,  it was like catching up with an old friend and bless my neighbors for not putting in a noise complaint, because I’m a pretty animated anime watcher! Y’all shoulda heard me scream when Deku went full cowl with One For All and my mouth hit the floor when BAKUGO “GET THE FUCK OUTTA MY WAY” KATSUKI actually complimented my boy on finally getting his shit together! I guess Bakugo isn’t such a jerk after all (though I still laughed when he didn’t get that provisional license). And Aoyama, a character I never paid much attention to (aside from the creepy way he stares into our souls) actually had me bawling my eyes out! Oh, oh, wait—how could I forget Shinso and Class 1-B finally getting some actual screen time in season 5!! ABOUT DAMN TIME!

There are just so many things I was missing out on and now that I’m here IDK if I can wait each week for new episode to come out… so I started reading the manga to fill the void and let me tell you that OVERHAUL arc… WTF anime, how are you gonna have this amazing villain and just… why?! I have to give a huge shout out to my IRL friends for sitting through many a 2 hour convo about the series over the past week, especially my girl Kamyia for simpin’ with me over skinny Fat Gum, because THAT MAN CAN GET IT! Who knew he was hiding all that sexy under that ugly hoodie?!

Simping over Sukuna (and Mr. Steal Ya Girl, Gojo)

So, after I finished going through MHA withdrawal, I figured why not show my Crunchyroll account a bit more love, so I sat down to watch Jujutsu Kaisen. THIS SERIES WAS ALL OVER MY INSTAGRAM FEED. I mean pics of Sukuna, Gojo memes, videos of the fights—my girl Lisa from the Wonder of Anime Podcast has fan merch for the series in her new store (*whispers* totally show her shop some love)—so I’ve been inundated with all things JJK for the past few months and that might have influenced my decision to start the series…maybe… Whatever the reason, I started JJK and at first I wasn’t feeling the series too much—super strong protagonist swallows gnarly mummified finger and gains magic powers and a demon daddy who lives rent free in his head. The first couple of episodes follow Yuji trying to get used to his new powers(?) and life at Jujutsu High, a super secret high school full of sorcerers in training (kinda like Hogwarts, but with more violence).

It was around this time that I was gonna quit. AND THEN *spoiler alert* EPISODE 5 HITS and Yuji gets killed off and I’m just taken aback, because even Gurren Lagann had the courtesy of waiting EIGHT episodes before killing off Kamina.  And now I’m caught wondering where the series could possibly go from there, so I keep watching and I get the hype now. I still have a handful of episodes to go before the end, but, there is just something special about this series. The animation is gorgeous, so fluid kinda like watching a really beautifully choreographed dance AND I love how the animation when they use their powers (cursed energy) is drawn in a different style from the rest of the anime, more like a watercolor painting. Or maybe it has less to do with the animation and more to do with the gore and the gratuitous fights ( I mean they just be poppin off with no warning all the time).

But the real reason I stuck around…

Gojo… that man showed up outta nowhere and I know I’m not the first one to say this but he awoke my inner Kakashi simping teen self and I have not looked back since! I loved him with the blindfold, but when he took it off… I about LOST MY DAMN MIND! But, he also has the skills to back up all his tomfoolery and I dunno about y’all but I got a little too overheated during his fight with Jogo—when he used his Domain Expansion… *fans self* Of course I can’t talk about JJK without mentioning the demon daddy himself, Sukuna. Y’all may not know this about me but, I love me a dangerous man, there is just something extremely sexy about a guy that could probably end me with the snap of a finger. So, Sukuna came and stole my whole life. He’s about to fuck up everyone’s lives real soon and I can’t wait for it!

My manga collection is a reminder I lack self control

I have a manga buying problem that has only gotten worse since the pandemic—extra disposable income and free time equals a lot of unplanned Rightstuf and Amazon orders. But, on the plus side I’ve discovered some amazing series in the process; Tokyopop started their LOVExLOVE manga line and they’ve been knocking it out of the park with all their new boys love (and yuri) releases and I’ve been snapping them all up!

There’s a nice selection of titles from one shots to ongoing series that’ll definitely appeal to most people’s tastes—slice-of-life, fantasy, high school romance, and more— but, some of my favorites are:

Star Collector, a 2 volume original English language release by Anna B. and Sophie Schonhammer that follows the relationship between Fynn a slacker and Niko, a nerdy stargazer. It’s super cute and full of warm fuzzies—my only complaint is it’s too short 😭 I want more!!

Our Not So Lonely Planet Travel Guide, an ongoing series by Mone Sorai about a pair of boyfriends who decide to go on a trip around the world before getting hitched. The premise kind of gave me some TJ and Amal vibes so I picked it up and it is so good! I love the relationship between the main leads, Asahi is much more cautious and reserved, while Mitsuki is much more carefree and their adventures in the various places they visit look like so much fun! Once places start opening up again I want to travel!

Also, while not technically a part of their LOVExLOVE line, Ossan Idol by Mochiko Mochida and Ichika Kino has been a fun read. 30-somethings team up to form a hit idol group, and as a 30-something myself I can definitely appreciate seeing more mature men in my manga!

And of course, SuBLime is my go to for all things boys love manga! I’m still waiting on my copy of Dick Fight Island and trust when it gets here I’m going to have share with the rest of the class, because an island of men fighting with their dicks is so bizarrely hilarious I can’t keep the fun to myself.

This isn’t even a fraction of all the series I own, maybe I’ll do a manga tour one of these days, but in the meantime here are some pics of my shelves~ 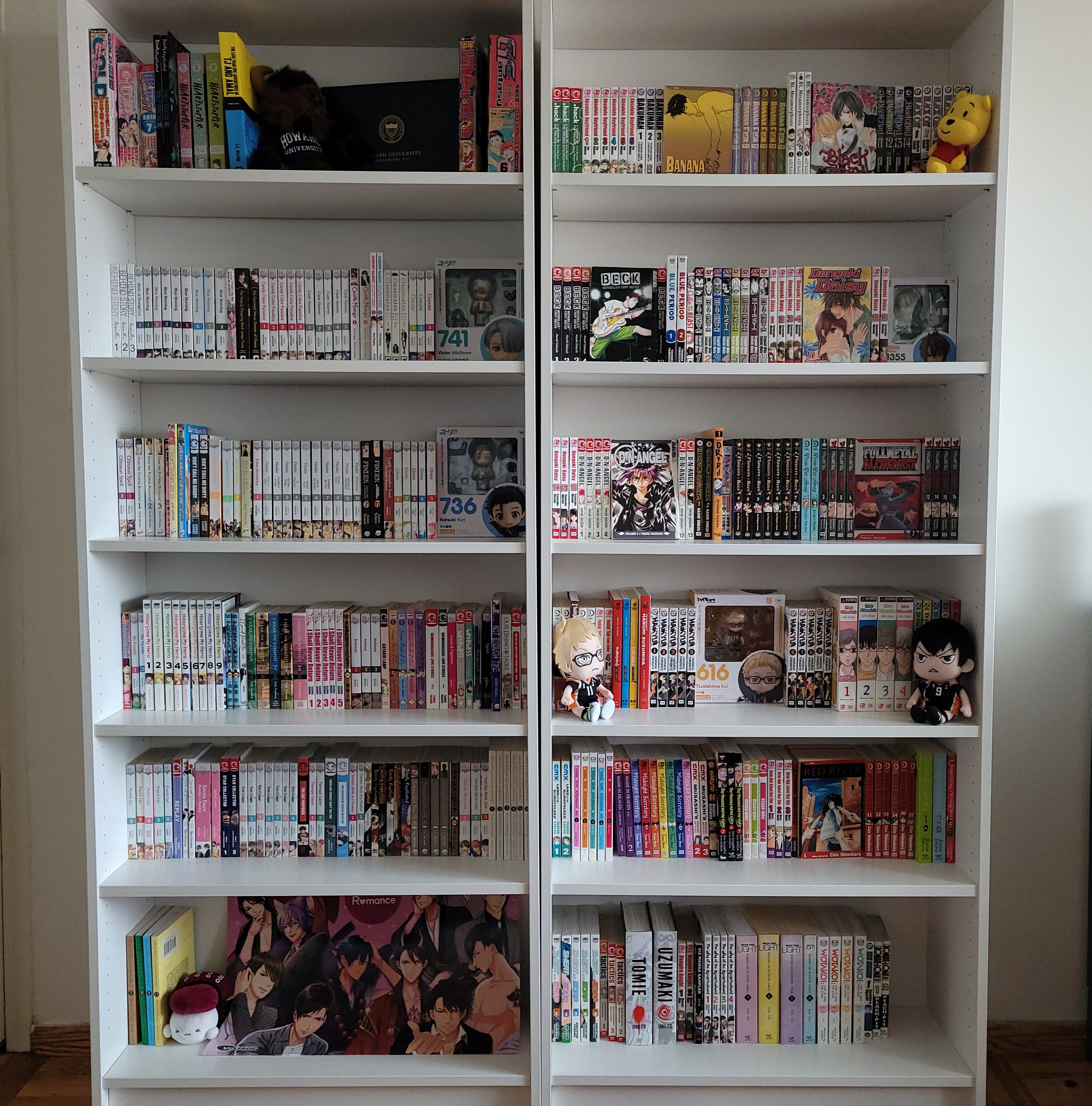