Once an impoverished boy, Ecout Kanovos lands a job as a recruit for the authoritative force of the city of Enonoia: the Master Order Trained Hire. However, Ecout soon realizes that this work exceeds his expectations of delivering any sort of justice.

Amidst the chaos of sudden abductions and riots, an otherworldly atmosphere looms just beyond the recesses of the city’s society. From a dubious state prison, Ecout frees Otis: a peculiar young man with a beastly visage who promises to return the favor with an ability to grant any wish.

Could this power repair Ecout’s life before it crumbles along with the city, or will the events that follow mark his undoing? What awaits you in the end is yet to be found.

Ovine Replica is a short adventure visual novel developed by Amorous Ursidae available for PC (Windows and Mac). The game draws inspiration from games like Chaos;Head and Shin Megami Tense. Like most visual novels, the bulk of the gameplay consists of making a series of in-game choices that determine which of the multiple outcomes you can achieve. With each new choice, you uncover a new piece of an overarching mystery.

The genius of Dr. Krueger shines again with his newest revolutionary breakthrough therapeutic sessions. Allow Krueger’s new treatment to tackle the toughest cases of mental disorder (peer-review pending) and fears in our ever changing day to day world. The genius lies not only within Krueger’s stunning techniques as a therapist, but also with what he calls “Dream Therapy”, combining breakthrough neuron technology with his closely held therapy principals.

Therapy with Dr Albert Krueger is a short interactive survival horror game developed by dino999z the second annual Spooktober Visual Novel Jam. Sign up for your personal therapy session with Dr. Albert Krueger, his revolutionary technique will literally change your life! Complete a series of interactive puzzles and tasks in this hilarious (and lowkey terrifying) VN. 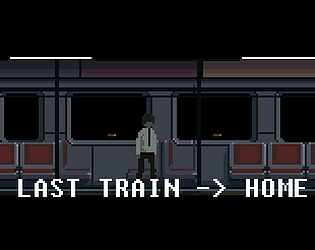 A short game about a guy stuck on a train.

Last Train Home is a short horror-adventure game about being stuck on a train. Loosely based on a story of the same name hby read on the internet. This game was originally submitted to MiniJam 47.

One thought on “Thrifty Gaming: Games That Won’t Blow Your Budget #66”