Without a Voice is a dark fantasy yuri visual novel developed by L3 for Yuri Game Jam 2016. The game borrows elements from fairy tales with some subtle nods to Hans Christian Andersen’s The Little Mermaid, but with a darker twist. Without a Voice follows Cassidy, an exhiled princess living alone in a small cottage in the woods. It’s a far cry from her comfortable life in the palace in the kingdom of Veromere, but she has made the best of her circumstances spending her days exploring the forest and reading. One day, while out on a walk she encounters a mysterious woman resting in the shade of an ancient wisteria tree. Captivated by the beautiful woman, Cassidy spends her days getting to know Elowen–but, unbeknownst to her, the wheels of fate have already begun to turn, and the pair will have to fight for their happily ever after. 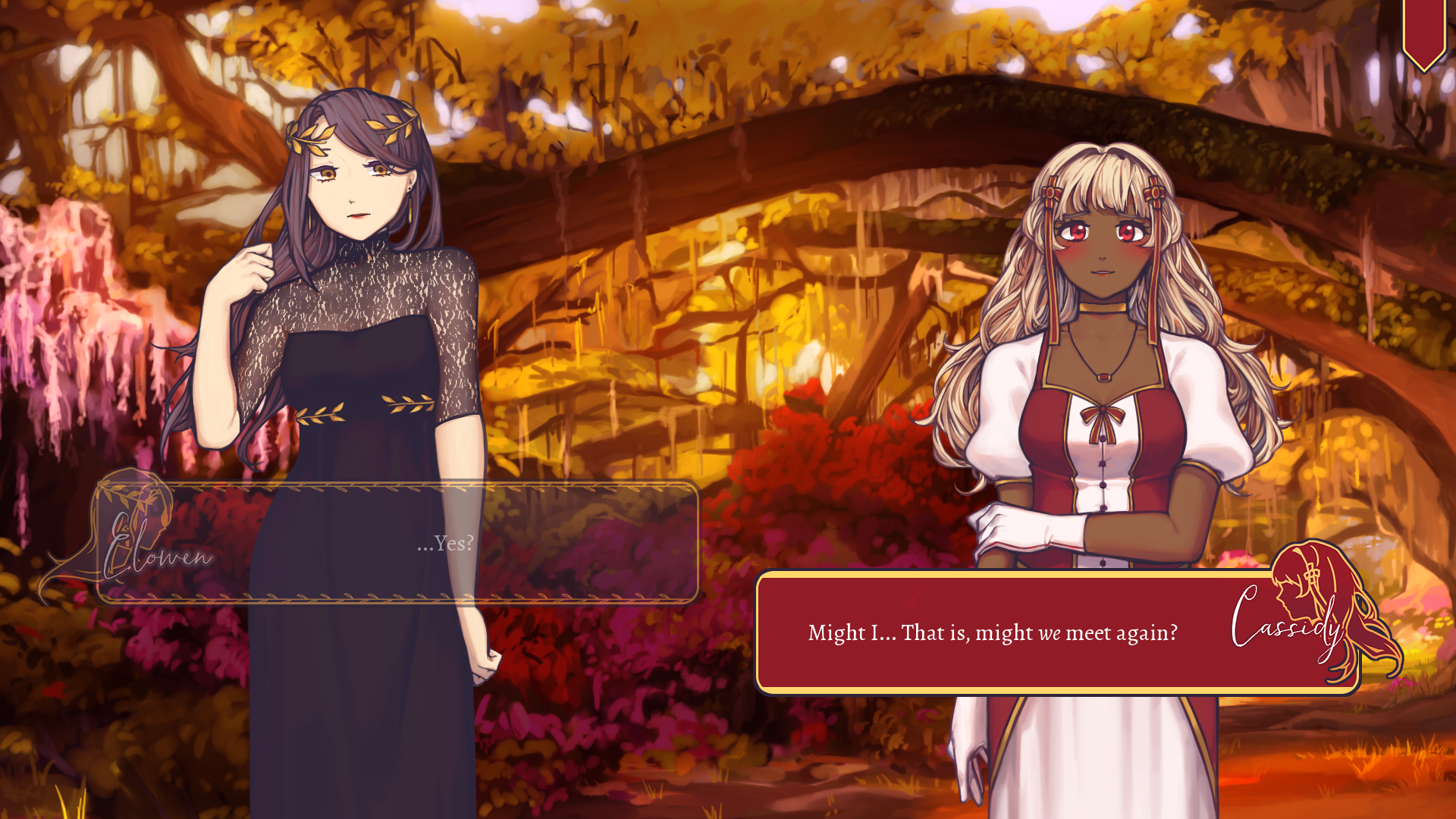 Without a Voice takes anywhere from 2-3 hours to get through and there are 8 unique endings to unlock. It’s available for PC either through itch.io or via the Steam platform. Like most of the older fairy tales, Without a Voice does get pretty dark in some of the bad end which can be triggering to folks sensitive to blood and/or death.

Without a Voice reads like a fairytale—an exiled princess meets a beautiful maiden deep within the woods and the pair develop a bond that grows into love. Cassidy is optimistic and naive, courtesy of her sheltered upbringing in the palace. She is very much a pampered princess—but her life isn’t as idyllic as you’d think. When her father died her younger twin brother plotted with his advisors to usurp the throne—though he has Cassidy convinced that her exile is for her protection. In fact, there are a lot of things that Cassidy takes in stride that would be a point of concern for someone more discerning. When she meets Elowen in the forest, she rather than being wary of her, she falls head over heels in love—opening her heart and her home to the strange woman.

Early on it’s pretty obvious that there is something otherworldly about Elowen—she seems to know more than she should, especially about Cassidy. She isn’t very forthcoming about herself, so everything we learn about her is fed to us in bits and pieces—and it isn’t until the end that you truly get the full scope of her backstory. Most of the game focuses on the budding relationship between the two women and I’m going to be honest, I’m not a huge fan of yuri games, so I wasn’t especially invested in this aspect of the story. Cassidy pretty much falls in love with Elowen at first sight, which given her naivete isn’t so far off brand, but, Elowen is also pretty attached to Cassidy from the start—and their attraction only grows with each new encounter.

The romance is a bit rushed in Without a Voice taking place over the course of seven days. I would have liked to have seen Cassidy’s and Elowen’s relationship fleshed out a bit more—one minute they’re strangers the next they’re having a night time cuddle session. It’s a blink and you’ll miss it courtship, which is pretty much par for the fairytales from which Without a Voice draws inspiration. While I wasn’t completely sold on the romance, I did really enjoy the dynamic between Cassidy and Elowen. They’re opposites in just about every way—Elowen is pragmatic and blunt, while Cassidy is overly trusting and optimistic. Most of the time, it is Elowen who serves as the voice of reason for Cassidy, poking holes in some of her more fanciful notions. The writers leave it up to you whether or not you trust Elowen’s advice—which more often than not can be the difference between life or death for Cassidy.

While short, Without a Voice packs a lot into it’s runtime, going to some pretty dark places. The bad endings are especially gruesome, generally resulting in the deaths of one or more characters, while the good endings tend to have a bit of a bittersweet twinge to them. The art is beautiful, the backgrounds are reminiscent of those nature oil paintings my Nana keeps in her livingroom—vibrant colors that put you in the mind of an enchanted forest… But, I especially love that Cassidy is a woman of color, since it isn’t often that you see Black and Brown female leads in an otome game. (Read: GIVE ME MORE OF THIS).

So, final thoughts—I can pretty much count all of the yuri games I’ve played on one hand, so I am by no means an expert on the genre. But, I am a sucker for fantasy romance and games with strong female characters and Without a Voice has both! While heavily inspired by fairy tales, Without a Voice tells its own unique story that will keep you captivated from start to finish—equal parts bittersweet and enchanting—L3 has a clear winner with this visual novel.