“One war. Two sides…” This perfectly encapsulates the premise of Nozori Games’s interactive visual novel. Guilty Parade.  Experience two sides of a military conflict, by stepping into the shoes of two very different protagonists on either side of the barricades. On one side is Nemo—an amnesiac young man who is taken in by the Commander of an unusual squadron of soldiers. Though he doesn’t remember much about his past, he is thrust headfirst into their cause as he and his new comrades attempt to investigate a mysterious crime. On the other side is Lien—a child of war, desperate to avenge the death of his mothers at the hand of the black apostates. There are always two sides to every conflict and Guilty Parade gives players a chance to experience both as you navigate the complexities of war through the eyes of two characters right there on the front lines.

Guilty Parade is definitely one of the more unusual demos I have played in quite some time. It features an eclectic cast of quirky characters that you’d expect to see in a comedic anime—not a post apocalyptic wartime visual novel, and yet strangely enough… it works. Guilty Parade‘s unique cast is by far it’s most distinguishing features, giving what normally would have been a grisly story a sense of levity. Though, despite it’s eccentricities, Guilty Parade is a wartime story, and it takes great pains to depict the pros and cons of military conflict.

The Guilty Parade demo splits the narrative between the two perspective—the first half follows Nemo as he gets acquainted with the eccentric members of the (at the time unnamed) squadron. Just like Nemo, we are thrust into the story without any warning or explanation and there is a sense of confusion as we try to piece together the situation at hand. I have praised this narrative choice in the past, because it gives the player a chance to develop their own thoughts and feelings about events as they unfold and makes for an all around more organic experience. However, in Guilty Parade this works to the story’s detriment as the characters and their (for lack of a better word) weirdness make understanding much of the story early on fairly difficult. So there is an added layer of confusion brought about by the parade of so many quirky characters in such a short period of time… there simply isn’t enough time to stop and breathe. That’s not to say that I didn’t grow to love these characters as the demo progressed, I just wish that I had had a chance to spend more time with each character before being handed off to another. That said, I did enjoy the characters, having such a large and unique cast of characters is nice, since it does work to give the game a sense of vastness that I tend to find lacking in most visual novels. There is a whole world to explore in Guilty Parade and for that we need a larger cast of characters to add their own unique voice and perspective—especially given the wartime premise—I imagine each character has their own story to tell and I am eager to read them in the completed version of the game.

While the squadron is comprised of pretty distinct personalities I found myself most interested in Rufus, a young woman who identifies as male (this is mostly played for laughs in the game); Elias, the blind apostate who enjoys drawing; and Yakov, a dude who looks as though he is in serious need of a nap. The protagonist, Nemo is interesting simply because of his amnesia and the sense of mystery that creates surrounding his sudden entry into the story itself. He sort of stumbles into the base of the Black Apostates with no memory of the war or even which side he’s on, which creates a unique impartiality that you don’t typically find in stories like this. He isn’t lead by any preconceived notions or rhetoric, rather he reacts to situations as they arise, whether that is contrary to the beliefs of the Black Apostates or not.

The second half of the demo focuses on the other side of the conflict, lead by Lien—a young man who is experiencing first hand the effects of the war on those around him. He and his friends (who are just as unique as the members of the Black Apostate squadron) give us a stark look at the darker side of the war effort. That’s not to say that you don’t see that in the first half of the demo—there’s a whole battle sequence that makes it clear they are at war and death is just around the corner—but that pales in comparison to seeing three children desperate to join the war effort for no reason other than to stop the suffering of those around them. While the Black Apostates are fighting for a better tomorrow, the opposition simply wants a more peaceful existence in the present… and I don’t know about you, but I can relate to that a whole hell of a lot more. But, that isn’t to say that their aren’t pros and cons to both sides and that’s what I really like about Guilty Parade, it doesn’t attempt to showcase one side as better than the other, rather it simply lets you experience both perspectives and decide which YOU find most appealing. War is never completely black or white, but shades of grey and I definitely appreciate Nozori Games’s attempts to visualize that in their game. 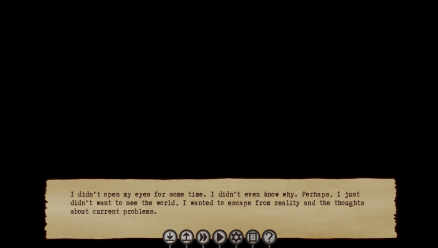 In an effort to keep this short, I won’t drone on about the philosophical implications of the game further (lets save that for a completed version), and instead look at the game mechanics. Guilty Parade blends together the interactive elements of a point and click adventure game with the storytelling elements of a visual novel—and I’ll say its a pretty seemless marriage of the two styles. Your choices determine the course of the story (and in the case of Nemo, help shape his personality), which is pretty standard for a visual novel. But, here there is an added sense of weight to your choices since they don’t just affect you, but the entire course of the war and who knows how many countless lives, so you know, no pressure. The point and click elements are fun, allowing players to explore various locations and interact with items and people, much like you would in a game like Ace Attorney. It gives the player more to do than just answering questions, which I will admit can be pretty dull after awhile. The interface is clean and simple to use, though I will admit that it’s easy to get turned around at first (I spent a few minutes going around in circles while exploring the Black Apostate base early on), but once you get the hang of it there’s noting too complicated about it. 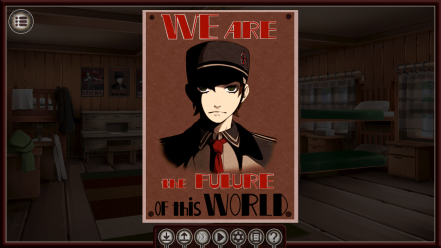 All in all, this is one of the most put together demos I have played. The art assets are clean and pleasing to the eye, I especially liked how Nozori Games uses focus to direct our attention to certain aspects of their CGs—there’s a CG depicting the slow procession of defeated soldiers back into town after a brutal loss that first slowly pans up from their feet to their weary and worn faces, giving the player a chance to fully take in the full weight and emotion of the scene. The sprites are well done and while it does use the “anime style”, I liked that the character designs are unique and definitely fun to look at, though Oliver’s neck weirds me out a bit… That aside, I really enjoyed Guilty Parade and I am looking forward to playing the full game when it is released.

You can also contact Nozori Games on Social Media through the following channels:

Thank you for reading and supporting Blerdy Otome! If you like what you see be sure to drop a like or a comment to let me know if you’ll be checking out the Guilty Parade demo?