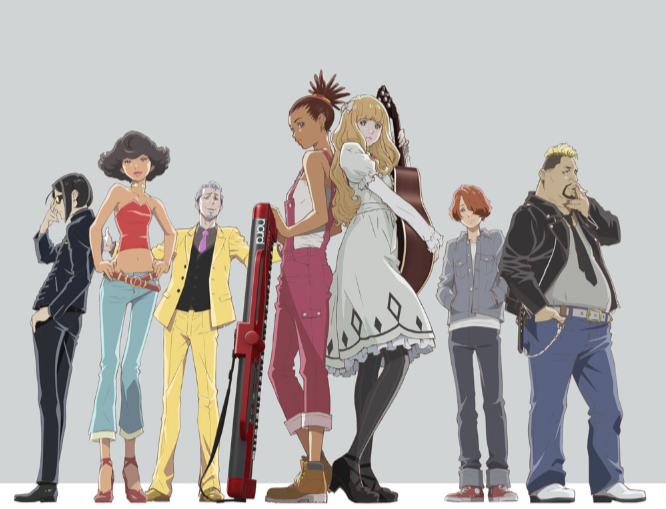 These past few seasons have me falling in love with music anime, and with Piano no Mori finally done, I’ve been looking for another series to fill the void and along came Spring 2019’s Carole & Tuesday. Created through a collaboration between critically acclaimed anime studio Bones and Japanese record label, Flying Dog, for their 20th and 10th Anniversaries, respectively, Carole & Tuesday utilizes their combined resources to create something truly amazing. Not to mention, acclaimed director Shinichiro Watanabe is also serving as the series’s supervising director, so you know this series sure to be a hit. 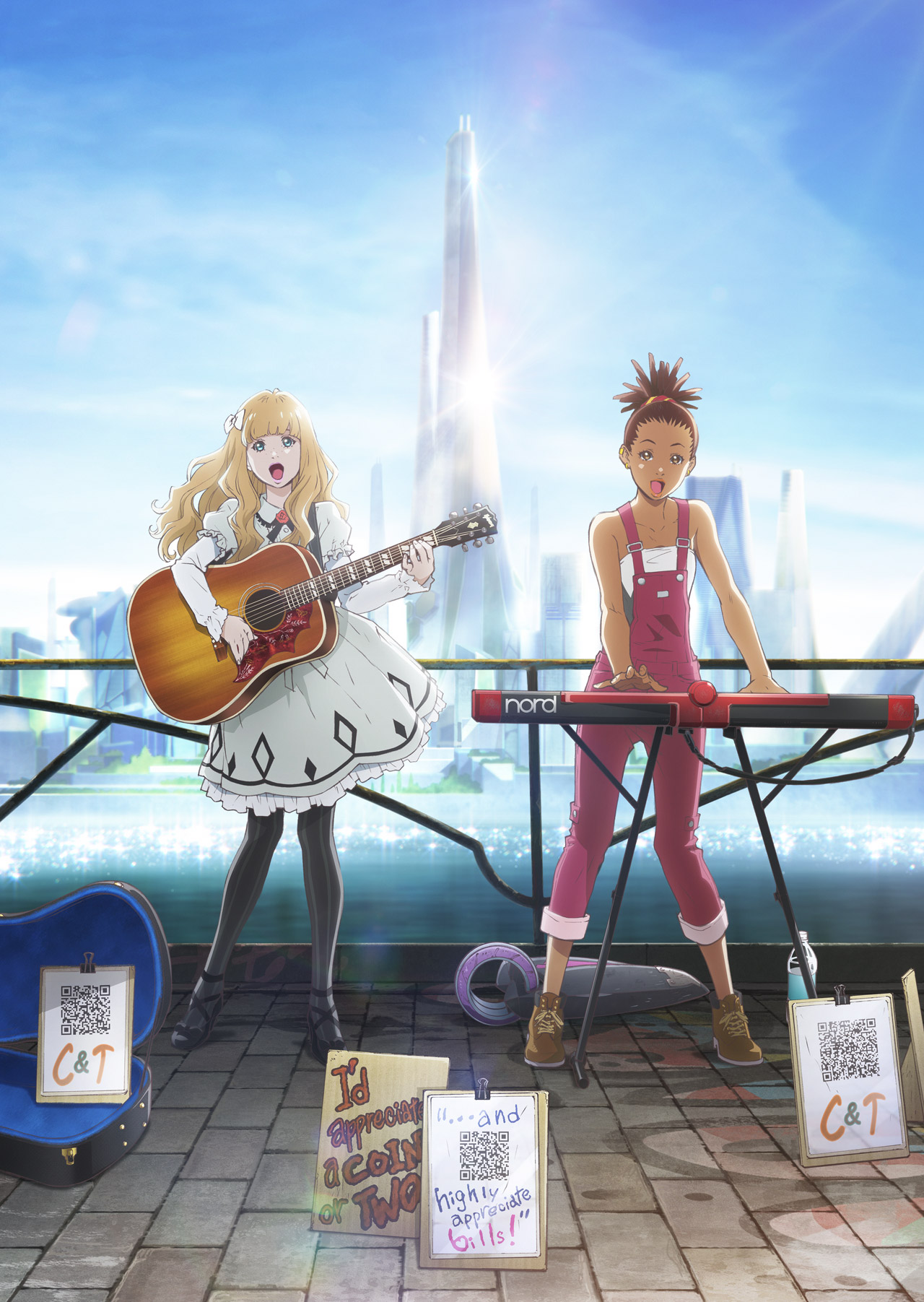 Set in the near distant future where mankind is now living on Mars and most media is produced by AI and people have become little more than passive consumers. Carole & Tuesday offers a heartwarming story of two girls from very different walks of life, connected by their love of music.

Carole, a young girl living in the thriving metropolis of Alba City, scratching out a living as she bounces from one part-time job to the next while trying to make some coin as a street musician.

Tuesday is a wealthy girl from the provincial town of Herschel City, she dreams of becoming a musician like her idol Cyndi Lauper. So she packs up her guitar and runs away to the city in hopes of making it big.

A chance meeting brings these two very different girls together, each finding something special in the other and decide to embark on a musical journey that will change their lives forever!

Two girls from very different backgrounds meet in the most unexpected way. Together, they embark on a musical journey that will change their lives forever!

The Music:  What’s a music anime without music? Right off the bat, Carole & Tuesday proves that it can deliver on the tunes, with four phenomenal songs! All of the songs in the series are in English, with the show’s site boasting that it is the first anime with all English vocals.  A global talent competition was held to secure the voice talents for the singing voices of the series’s main characters, Carole, Tuesday, and their rival Angela. Of the participants three winners were chosen: Nai Br.XX as Carole’s singing voice, Celeina Ann as the singing voice of Tuesday, and Alisa, as the singing voice of Angela. Both the opening theme, ‘Kiss, Me’ and ending theme, ‘Hold Me Now’ are sung by Nai Br.XX and Celeina Ann and they are both phenomenal, utilizing the talents of their artists to the fullest!

Musical Episode Titles: All of the episode titles are references to influential/critically acclaimed songs and albums. The first episode, ‘True Colors’ borrows it’s title from Cyndi Lauper’s 1986 number one hit single (Lauper is also Tuesday’s idol). The second episode, ‘Born to Run’ is a reference to Bruce Springsteen’s first mainstream hit album, and the third episode, ‘Fire and Rain’ borrows its name from the 1970’s folk song of the same name by American singer-songwriter James Taylor, from his second album Sweet Baby James.

Beautiful Animation: I am a huge fan of Bones, their gorgeous landscapes and sweeping background animation always manages to bring their stories to life and Carole & Tuesday is no exception. The animation in these first three episodes is simply breathtaking, while most of the story is set in the futuristic metropolis, Alba City there is no end to the vibrant details and designs, from the sleek and sophisticated streets of the city’s center to the more eclectic lived-in feel of Carole’s neighborhood the locales simply leap off the screen. Bold vibrant colors, gorgeous lighting effects, and unique character designs make for a visually stunning experience.

The premise is pretty standard, two girls meet and decide to become musicians, it’s not too different from Madhouse’s Beck: Mongolian Chop Squad, but with a bit of a twist. Carole & Tuesday trades in the usual Japanese small town for a thriving Mars metropolis, which given Shinichiro Watanabe’s track record isn’t wholly unexpected. There’s a subtly to the world building that is still firmly grounded within the realm of reality, despite the futuristic setting. There are some glimpses of advanced technology, but, its been integrated in a way that almost makes it feel commonplace, like Carole’s scooter or the tabletop menus in restaurants or the moving walkways in downtown Alba City. It’s reminiscent of the eclectic fusion of old and new that we saw in Watanabe’s earlier series Cowboy Bebop, which gives us something unique without being too far removed from reality that we can’t relate to it. But, the real selling point of the series are the main leads.

The chemistry between the two main leads is reminiscent of Nana Komatsu and Nana Osaki from Ai Yazawa’s long running series, Nana. Here you have two girls from two very different walks of life; Tuesday, the sheltered daughter of an affluent family who runs away from home to fulfill her dreams of being a musician and Carole, a street wise orphan, scratching out a living with slew of part-time jobs, but her true passion is music. In fact, the first time the girls meet, Carole is singing for change, entranced by her voice, Tuesday stops to listen and the two find in each other kindred spirits. They’re complete strangers and yet there’s this organic chemistry between them that just resonates with me, they’re two girls searching for something and they find it in each other…. there’s just this spark. Some of my favorite scenes are just the two girls together swapping stories about their past or sharing their dreams for the future. There’s nothing especially mind blowing going on, but, you hang off their every word.

There are quite a few quiet moments in the series, which I appreciate, because it makes the music that much more impactful. You can’t have a music anime without actual music and Carole & Tuesday more than delivers, with the soulful voices of Nai. Br.XX (singing voice of Carole) and Celeina Ann (singing voice for Tuesday). Both singers have voices you’d expect to find in most pop singers, but there’s this ethereal quality to it that just resonates with you, maybe it’s the contrast between the English vocals and the Japanese voice cast, but there, is a weight to the songs that you don’t usually find in music anime. So far, in addition to the opening and ending themes, there are two original songs, ‘The Loneliest Girl’ (Episode 1) and the Laundromat song (Episode 3), both songs take full advantage of their their talented singers, but, I will admit that I like ‘Loneliest Girl’ more, simply because we see this song develop from a lyric-less melody to a full fledged song.

One of my favorite scenes in the series so far comes from episode 1, when the girls are composing ‘The Loneliest Girl’, we first see the song as just lyrics in Tuesday’s journal, then we hear what will be the melody from Carole when she is singing on the street midway through the episode. But, it all really comes together towards the end of the episode, when the girls are sitting in Carole’s living room, Tuesday with her guitar and Carole with her keyboard, just trying to marry the lyrics to the music. It’s a bit rough at first with a lot of breaks and missteps as they go along, but then there’s this moment when it all just falls into place and that’s when the real magic happens. But, that’s not to say that the other songs aren’t equally as good, both the opening, ‘Kiss Me’ and the ending theme, ‘Hold Me Now’ are real winners as well, though ‘Hold Me Now’ is my favorite.

I will admit that hearing the English lyrics for the first time through me for a bit of a loop, since I was fully prepared for Japanese lyrics, but, oddly enough it fits. I can’t imagine Carole or Tuesday singing in any other language other than English, and because both of their singing VAs are native English speakers, there isn’t any messiness with the pronunciations that you find in most Japanese music. I know this is seriously old school, but, the English vocals remind me a lot of Madhouse’s Beck: Mongolian Chop Squad, while Koyuki’s singing voice in that series was done by his Japanese voice actor, the clean delivery and execution really enhanced the series as a whole and the same can be said for Carole & Tuesday.

Music is at the very heart of the series, with a whole host of well known artists lined up to contribute to the soundtrack. But, the musical themes go deeper than that, it’s not enough to just play the music, there has to be a heart and soul behind it as well, and the first three episodes hammer that point home. In the series, entertainment, especially music is provided by AIs, and while it is pleasing to the ear, it’s missing the heart and soul you get from more natural means.

As if to contrast, Carole and Tuesday’s organic wholesome sound, another up and coming artist, Angela is being groomed to be the human face of a new AI artist. Where we see the girls actively honing their sound and enjoying music in all its forms, we don’t see that with Angela. Rather we see her in a sterile lab, hooked up to various machines while music producer, Tao fiddles with various dials and switches. There’s a scene in episode 3 where we see a bit of Angela’s voical training and it wouldn’t be out of place in a horror film. She’s strapped in to this machine while various probes prod her throat and another adjusts her mouth, it looks a helluva lot like the dentist scene in Little Shop of Horrors and it feels that way too, especially when Angela’s “singing” escalates to screams. The only other example of music we have outside of that is from DJ Ertegun, a popular DJ in Alba City and his performance looks more like a rave than anything else. 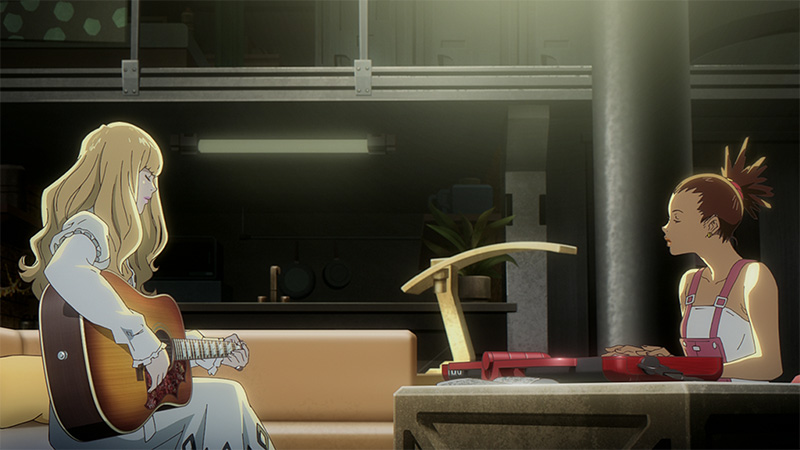 It’s still pretty early in the series, but, the first three episodes lays a pretty solid foundation for the rest of the series. In episode one the girls meet and by episode three they’ve secured a manager and are taking their first steps on their journey to be musicians. There’s a potential conflict in the form of Angela and her AI influenced musical career, but, even that seems like something that’s just simmering under the surface. The focus in these early episodes is on Carole and Tuesday as they work through the trials and successes of becoming musicians, but, with tons of laughs and more than a few heartfelt moments.

Of all the Spring 2019 series’s Carole & Tuesday was the one I was most looking forward to seeing and it was everything I could have hoped for and more! With Bones’s amazing visuals and Flying Dog’s phenomenal music, Carole & Tuesday is the stand out for me this season! Usually they say you need three episodes to really get a feel for how good an anime is going to be, but, with Carole & Tuesday, I only really needed one!

If you haven’t already given this series a try, I strongly recommend jumping on the Carole & Tuesday bandwagon ASAP! You won’t be disappointed!