Hey Hey Heroes, Travelers, and Wandering NPCs, it’s Black History Month once again and with it comes the revival of Melanin Monday, the post series where I talk about the representation of Black and brown characters in pop culture. While I mainly focus on the nerdier side of the pop culture spectrum, from time to time I will cover more personal posts about my experiences as a Black nerd.

This started as part of Black History Month 2017, but you guys liked it so much that I decided to keep it going, albeit rather sporadically. However, for the month of February I will try to post one of these every Monday.

This week I didn’t really have anything planned since this post coincides with my OWLS Blog Tour post, and I am notorious for waiting until the last minute to do anything… So rather than focus on a particular form of media, I’m just going to talk about the importance of representation in general… as a rant. 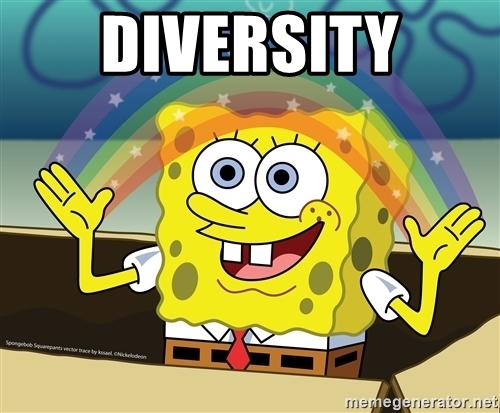 Now, when I say representation, I don’t mean the token black friend that shows up maybe once or twice in a series before vanishing from the face of the planet, nor do I mean those poorly construed caricatures that only serve to further perpetuate the same played out and quite frankly hurtful stereotypes. No, I mean, wholesome characters that exist within the narrative for reasons outside of the color of their skin.  What I mean by that is, we don’t need Black characters for the sake of having a “diverse cast”, but instead because these characters add something of value to the narrative outside of just boosting the melanin quota for a series.

Don’t get me wrong, as a Black woman, I appreciate seeing people of color in the media I consume, because these characters act as an on screen representation of me or at the very least family and friends. However, that doesn’t mean that all representation is good representation.

I’ve mentioned this quite a few times in the past, but I have a bit of an issue with non-Black individuals controlling the narratives of Black characters in the media, because often times they are writing about experiences and a culture they are not apart of…which means at best they only have a cursory knowledge of the people they are attempting to adapt for a general audience. So their characters by extension tend to fall prey to preexisting stereotypes and tropes commonly associated with that specific group of people. Most times this is unintentional, a product of years and years of systemic oppression and social conditioning, but it’s a problem nonetheless, because these characters are used to form a basis for what a “Black person is supposed to be like”, which more often than not is as far removed from reality.

But, non-Black individuals aren’t the only folks parading negative stereotypes around as if they were God’s gift to mankind. There are quite a few Black creators that actively participate in perpetuating the same old tired negative stereotypes we’ve seen hundreds of times over. Some, of course do this as means of social commentary, which in and of itself is a double edged sword. And then there are those individuals that do so simply because it’s what “the people want”, and it is this bastardization of the artis gratia artis motto that pisses me off to no end, because it shows a complete lack of awareness and reverence for the very people the creator is trying to portray in their media. Most of the time we vilify these creators for their backwards ideals and mentality, but when the questionable media is still being circulated, it becomes a permanent fixture in the eyes of the people that consume it. So the very fact that this type of media exists is problematic, because even if we slam it, people are still going to consume it simply because it exists!

We need to take control of the media we consume and demand that they do better, because quite frankly, I am tired of seeing my people getting dragged through the mud for the sake of entertainment. My struggle is not for your amusement, I’m not Kevin Hart, and we are not about to “laugh at my pain”, so we need to hold creators to a standard. Don’t just fall in line and push out the same shit, take the time to learn about the people your are trying to adapt, understand that we aren’t one dimensional characters you can twist to your whims. We are a multifaceted group and we deserve the appropriate level of representation in the media.

So, what’s my point in all of this? Because believe me there is a point!

At the end of the day we must hold creators accountable for the ways they portray people of color in the media, if not for ourselves, then for the future generations that will grow up consuming these hackneyed stereotypes as fact rather than fiction. As with most things, this is a quality over quantity issue, diversity for diversity’s sake means nothing if the quality of the media is not up to snuff.

I know this is different from the types of posts I usually write here, but after having to check someone’s privilege earlier today, I’m more than a little pissed. So, I wrote a rant… love it, hate it, ignore it… these are just my thoughts.

5 thoughts on “Melanin Monday: Why We Need Quality Representation- A Short Rant”