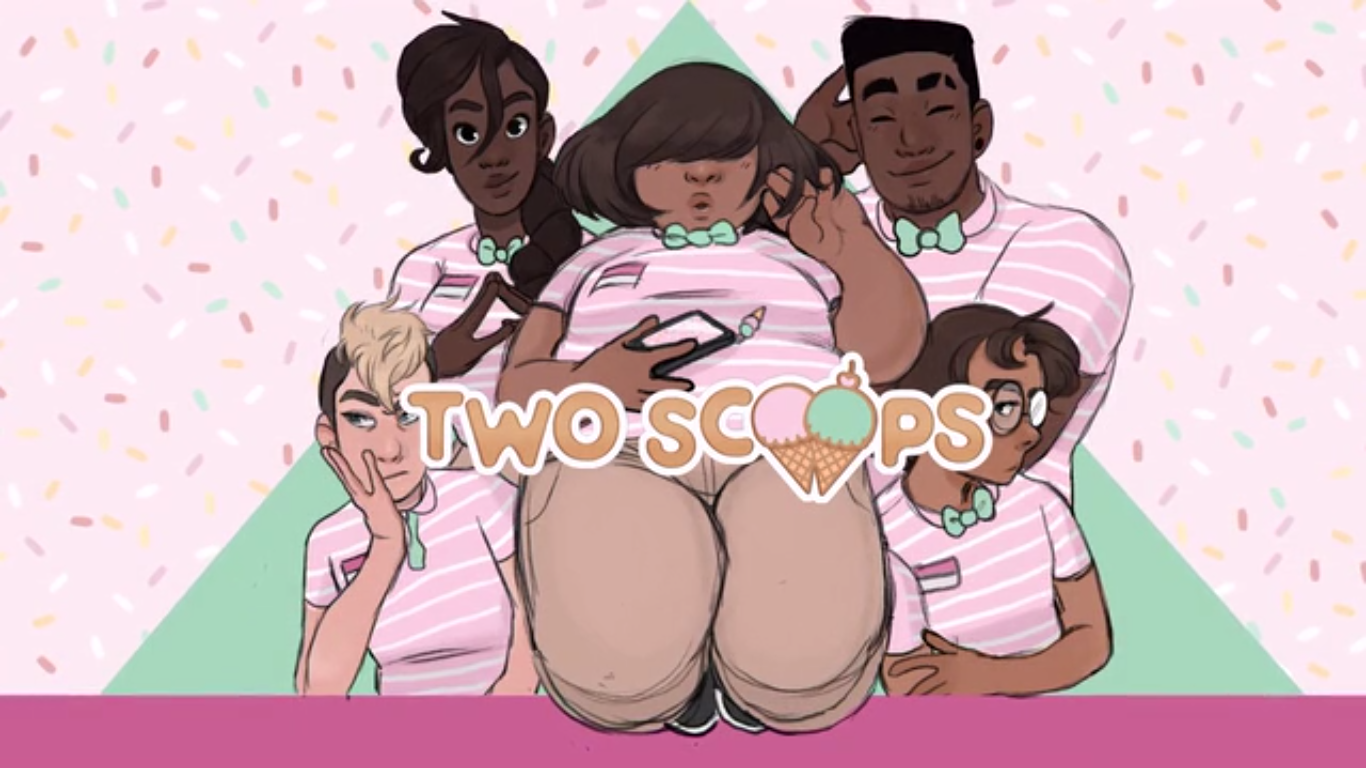 Edit (6/29): The Kickstarter for this game failed to achieve the necessary funds by the deadline. Production of the game is on hold until the developers feel that there is a viable market for it.

Hey hey guys I’m back with yet another Kickstarter campaign! This time around, I’m spotlighting the upcoming dating sim, Two Scoops. This game is a joint collaboration between Thumb Cramps and Pillowfight and follows an unnamed protagonist as she adjusts to her new job at a local ice cream shop and maybe find love along the way…

Two Scoops is a cute slice of life romance visual novel that features a non-traditional MC and a diverse set of love interest. Interact with the employees of Two Scoops Ice Cream Parlor, learn the ropes and maybe strike up a sweet romance.

In this game, you take on the role of a young woman who has just started a new job at a local, family-owned ice cream shop. She’s taken on a big responsibility, too: two of the employees are going away soon, leaving her to fill their shoes! With only a week remaining before their departure, the situation seems tricky for our protagonist, but she is determined to show that she’s the right one for the job, all while growing closer to her co-workers along the way.

Heroine (name changeable) is a new hire at Two Scoops Ice Cream Parlor. She’s optimistic about her new job, but, she still has a lot to learn before she’ll be able to run the shop on her own. Unlike traditional otome game/visual novel heroines, the MC of Two Scoops is a curvy gal, who’s not afraid to be herself!

This will be a commercial release, but by pledging at the $15 tier, you all can snag a copy of the game. There are also a set of Stretch Goals that will expand the scope of the game if met. Some of the expanded features include partial voice acting, additional love interests, and more!! Upon it’s release the game will be available for Windows, Mac, Linux, and Steam. The Campaign Goal is $25,000 and will run until  June 23rd 2017!

At this time there is a demo which can be downloaded from the itch.io page or the Kickstarter page. The demo covers a bit of the game and gives players the opportunity to interact with all of the planned love interests! It may be short, but you’ll get a good feel for the mechanics and the characters, so it’s definitely worth checking out!

You can also contact the devs on Social Media through the following channels:

2 thoughts on “Let’s Show Our Support for Two Scoops!!”