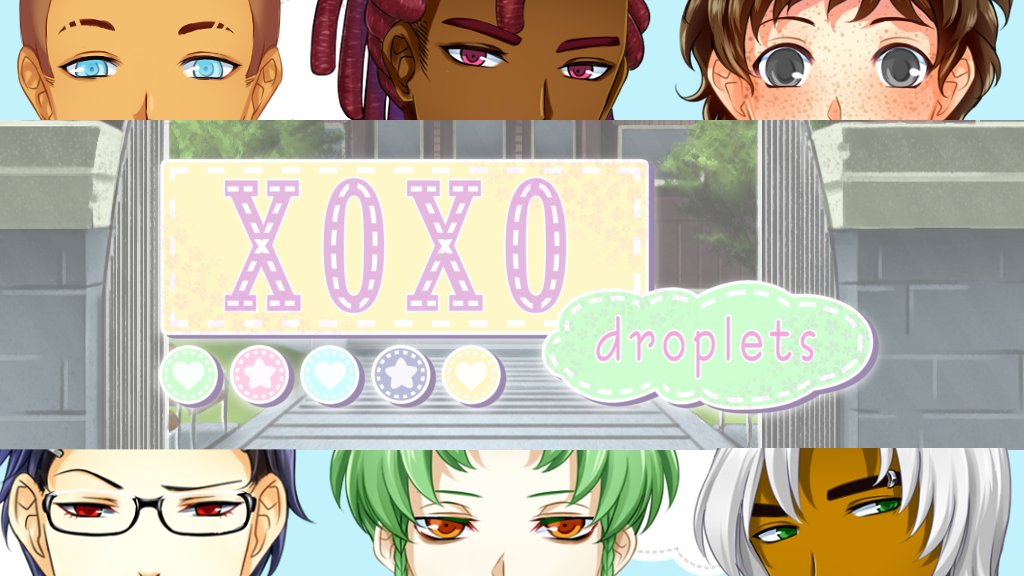 Edit (6/29): The Kickstarter for this game was successful at meeting its funding goal. The final funding amount was $4,112 with 158 backers! The game now has a tentative release date of Summer 2017!

Hey hey guys I’m back with yet another Kickstarter campaign! This time around, I’m spotlighting GB Patch’s upcoming comedy dating sim, XOXO Droplets. I have been following this game for awhile, but in order to reach a larger audience GB Patch wants to create a free to play version of the game, so, they created this KS campaign to help raise funds.

This game is in the final stages of development and the fact that GB Patch is willing to release both a free and paid version of the game is awesome!

XOXO Droplets is a quirky comedic romance visual novel that follows an optimistic young girl as she attempts to woo six jerks. This promises to be an immersive gaming experience full of fun features an mini games that will keep players captivated for hours!

The story begins when our nameable protagonist finally transfers into the boarding school of her dreams at the start of her junior year in high school. It would be perfect if it wasn’t for that little catch attached to her enrollment: her parents will only let her keep attending the school if she doesn’t make everyone there hate her, like she always does.

Do your best to show just enough interest in the other losers around to appease the folks while still having time to chase after all the attractive guys in the MC’s afterschool group, which just so happens to be a group for chronically unfriendable people.

GB Patch is working on creating two versions of the game, a free to play version and a commercial release. Both games will follow the same general plot, however the free version will only feature three of the six planned love interests. The full version will also feature two additional side boyfriend options.

Heroine (name changeable) is an optimistic transfer student, who has finally enrolled in her dream boarding school. Persistent and enthusiastic, she is a force of nature!

This will be a commercial release, but by pledging at the $15 Early Bird tier, you all can snag a copy of the game. There are also a set of Stretch Goals that will expand the scope of the game if met. Some of the expanded features include voice acting, early backer release, and more!! Upon it’s release the game will be available for Windows, Mac, Linux, and Steam. The Campaign Goal is $2,500 and will run until  June 7th 2017!

At this time there is a demo which can be downloaded from the itch.io page or the Kickstarter page. The demo covers a good bit of the game and gives players the opportunity to interact with all of the planned love interests! It may be short, but you’ll get a good feel for the mechanics and the characters, so it’s definitely worth checking out!

You can also contact GB Patch Games on Social Media through the following channels: