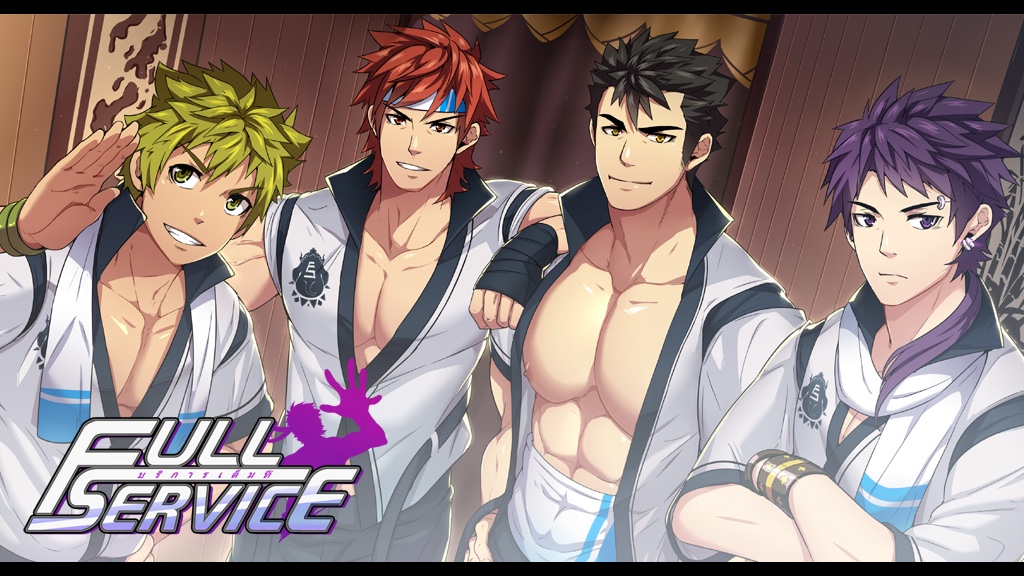 Double entendres and buff naked hunks abound in Herculion’s upcoming 18+ BL game, Full Service. The game follows Tomoki Nakamoto an overworked young office worker with a rather cynical outlook on life. When a stranger hands him a business card to the Full Service Spa, he encounters a colorful cast of characters that are more than happy to help Tomoki relieve a little “stress”. The game is currently on Kickstarter, so feel free to stop by and show your support, there are still a few days left in the campaign.  Full Service will be a fully voiced commercial release, and will be available for PC (Windows, Mac, Linux) and Android.

You know, I knew there was something familiar about this game, and after re-reading the Kickstarter page again, I discovered something that genuinely surprised me. Herculion isn’t a new group, Herculion is Black Monkey Pro reborn! I thought I was done with BMP after I reviewed the Bacchikoi Expansion Pack, but nope…they are the gift that just keeps on giving!

Welcome to Full Service! You play as Tomoki Nakamoto, a workaholic young adult who works at Schwarz Bank. Average in every way and bordering on anti-social, Tomoki isn’t that great with people… However, after a chance encounter and getting a bonus at work he finds himself entangled in the lives of those at Full Service Spa! What exciting things will Tomoki experience this time?

BL games tend to go one of two ways, either they are angsty drama fests or they’re campy, there have been a few exceptions in the past, but those are few and far between. With Full Service, I can safely say that this title leans more towards comedy. I don’t think I’ve laughed so hard playing a game in my life, I just found everything so ridiculous, I just couldn’t help but laugh. But, that’s not a bad thing at all, in fact I like a bit of comedy with my games, helps liven things up a bit, plus I needed a good laugh. The premise is what you’d expect from a 18+ BL game, an overworked, but naive 20-something goes to a spa full of hunky masseurs and partakes in some of their “special services”.

The demo doesn’t get down to all the sexy time stuff, but they do tease us with the prospect of what’s to come in the final game. You can choose one of four masseurs (Sota, Kovit, Rald, and Remi) to service Tomoki, after experiencing their special massage technique, they will ask if you want to partake in their special ‘happy ending’ service. You can either choose to give the service a try or turn the masseur down. If you choose go through with it the masseur will strip down to their undies all while vaguely explaining what’s about to happen. However, since this is a demo, you don’t actually get to experience any of the ‘happy endings’ because Tomoki didn’t bring enough money for the premium service. So, the masseur just gives Tomoki a regular massage and sends him on his way.

The characters themselves are a bit of a mixed bag, while I praise Herculion for making Tomoki a relatable protagonist, his disillusionment with life and work mirrors the outlook of many millennials, but his naivete is a bit unrealistic. I mean come on, I knew what a ‘happy ending’ was long before any of the other characters started taking off their clothes. One character even went so far as to actively comment on how delicious Tomoki looked, accompanied by the guy licking his lips! There’s naive, and then there’s painfully oblivious, and Tomoki falls into the latter category. I’d really like to see a BL protagonist that is a bit more worldly, rather than another malleable protagonist that easily gets himself entangled in a relationship with a much more experienced partner. But, perhaps I’m asking for too much.

The rest of the cast is made up of one dimensional trope characters, that I found rather entertaining despite their rather campy portrayals throughout the demo. There are hints that the characters will have much more substantial character development in the final version of the game, but as it stands, I could probably sum up the entirety Full Service‘s cast by simply linking to a few choice TV Tropes pages.

The demo introduces us to all of the main love interests and a handful of the supporting cast (not including the KS campaign stretch goal exclusive secret characters)  and I have to say, I am impressed by how diverse Herculion made their cast, there is literally a trope, I mean, character for everyone. Out of all the guys, I have to say that Tomoki’s hot boss, Rald and the cool model, Remi are my favorites. Unlike Kovit and Sota who always seem to be ready to jump Tomoki’s bones, Remi and Rald seem to be the least interested in getting into Tomoki’s pants. Each of the love interests specializes in specific massage style: Shiatsu (Sota), Swedish (Remi), Thai (Kovit), Deep Tissue (Rald). During the massage you can chat with your chosen masseur and get to know them a little better, but since this is a demo, not much is revealed.

Design wise, Herculion went with a much more masculine look (toned, muscular bodies and faces) for Tomoki and all of the main love interests. While I appreciate the departure from the usual bishounen style, I really wish the characters’s clothing didn’t look like they’d been left in the dryer too long. While the clothing looks fine in the CGs, the character sprites don’t fare as well, especially when the characters are wearing business suits… they make the characters look like they are about to Hulk right out of their clothes. The overall character designs lend themselves to some of the stylistic choices used in bara media and while I don’t hate it, the way the sprites look might be a bit off putting to folks used to the much more sleek style of other BL games.

There wasn’t much in the way of additional features in the demo aside from the location maps and the usual choice driven scene options. Though many of the locations are locked in the demo, so you can only go to Tomoki’s apartment, his job at Schwartz Bank, and the Full Service Spa. The map like the rest of the GUI is clean and very user friendly, I had a good laugh at some of the details, like the giant Hollywood-esque, Morningwood sign. I have to give it to Herculion/BMP, despite all of my complaints about their previous titles, they always managed to include a lot of fun little Easter eggs and details into each and every one of their backgrounds and Full Service is no different… if only everything else was given so much care. *sigh*

The game is split between four phases: Massage Phase, Work Phase, Free Time Phase, and Full Service Phase. However, the bulk of the demo consists of the Massage Phase, where the player interacts with their chosen masseur. But, the final version of the game promises to include expanded Work and Free Time Phases, where the player can earn money through a short mini game or explore various locales around town.

The writing is just as campy as you’d imagine, a lot of thinly veiled come ones and double entendres, but, oddly enough it works, because the game doesn’t take itself too seriously, at least I hope that was the intent. If you view this game through a comedic lens everything is much more palatable, but the moment you try to take any of it seriously, it loses all of its magic. *deep sigh* There were a handful of noticeable spelling mistakes and awkward sentence phrasing, which at this point has become a bit of a trademark for Black Mon-, sorry Herculion, so I sincerely hope that they edit this game heavily before the release. Please.

I should note that I went into this demo completely blind and I still have the exact same complaints I had with both Sleepover and Bacchikoi, but I will say that they were not enough to put me off this game entirely. There are so few BL games out there, so despite my history with BMP and their games, I am surprisingly optimistic about Full Service. And judging from the overwhelming support they’ve received on Kickstarter, I am not alone in my sentiments.

I really, really hope that I don’t regret this later, but this was a solid demo. The art while different was well done, particularly the Backgrounds, CGs, and GUI (which had a distinct spa feel). The characters while pretty cliché were fun and I’m interested in getting to know them better in the final version of the game. Herculion has a lot of great features planned for this game including, but not limited to: secret characters, twinservice (yes… Twins), extra dates, full English voice acting, and more. Full Service promises to be an ambitious undertaking for Herculion and I for one want them to knock this one out of the park…

You can also contact Herculion and let them know what you think of the demo through the following Social Media channels: