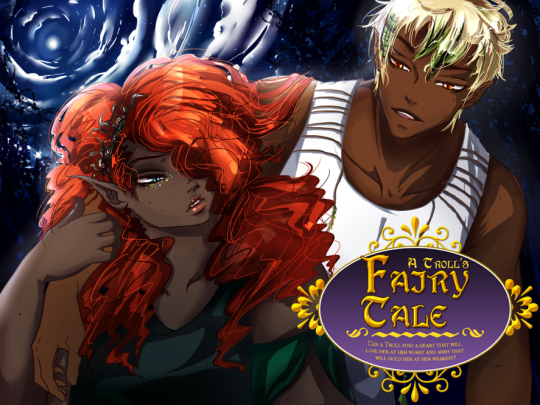 Hey Hey!! Day 2 of my “mostly” month long shoutout to melanin friendly games!! It’s Black History Month, so for the remainder of the month, I want to write mini reviews spotlighting games that feature Black and Brown characters in prominent roles! As a Black woman and gamer, I am always on the lookout for games that feature characters that look like me and even more so, stories from creators of color. Because there is just something beautiful about creators of color telling their own stories!

And today’s Melanin Friendly Game pick has both!

Y’all may know S-morishita for her delightful webcomic series Catch Me! Fight Me! Love Me!, but did you know she also released a game too?! S-morishita is a triple threat- Artist, Writer, and Game Developer! Back in 2013, she released the fantasy romance visual novel, A Troll’s Fairy Tale, for the one month Game Jam, NaNoRenO. The game follows a 24 year old troll, named Acacia, who despite not being a beautiful dainty princess, wants to have her own fairytale romance just like the ones she’s heard about in stories. But, can a troll really have her own happily ever after? Join Acacia on her quest for the perfect fairytale romance and find out!