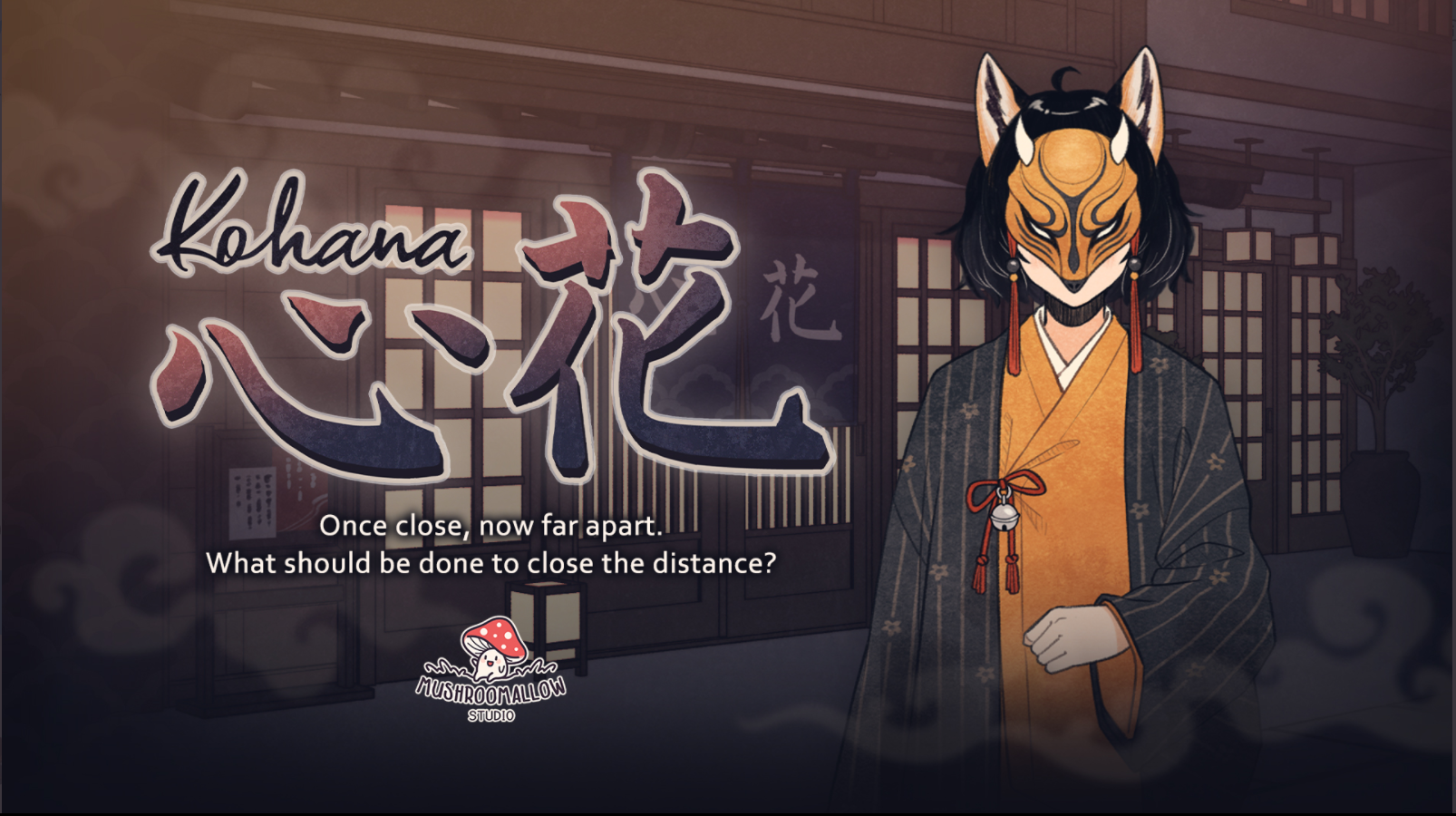 Kohana is a short fantasy visual novel developed by Mushroommallow in one month for the Spooktober 3rd Annual Visual Novel Jam. Inspired by Japanese folklore, Kohana is a heartwarming story about two estranged childhood friends from two different worlds. Witness their relationship and unravel the tragedy that pushed them apart.

“Once close, now far apart. What should be done to close the distance?”

Kohana, a Japanese confection store in a world where humans and youkai coexist together. Ren, the young confection maker and the owner of the store, has been continuously attacked by a fox-shaped shadow. He knows the perpetrator, yet did nothing to stop them. Once the store guardian, Komainu, has enough and swears that he will eliminate the attacker, Ren has to do whatever it takes to stop the bloodshed between the two people he holds dear, even if it costs him his own life.

Witness the relationship between two childhood friends and unravel the tragedy that pushed them apart.

Kohana is a Heartwarming Fantasy VN

Kohana isn’t spooky in the traditional sense, there aren’t any jump scares or ghouls and ghosts or haunted houses out for blood. Rather Kohana is a heartwarming story about two estranged friends finding their way back to each other after a tragedy sends them down different paths. Ren, is a human confectioner and owner of Kohana, a confection shop that caters to both youkai and humans, while Iroha is a hanyou (half human, half youkai) struggling to find a place for herself. Despite being from two different worlds, the pair strike up an easy friendship that ends after an unexpected tragedy tears them apart–in the present Ren and Iroha are on different sides of a dangerous youkai/human conflict, one that could very well cost each their lives.

I know, that sounds dramatic, but surprisingly, Kohana is a much more intimate story, taking the uneasy relations between the fox youkai and humans and mirroring it with the relationship between Ren and Iroha. We see them in the present day, their previous relationship all but forgotten and we’re left wondering what lead to the end of their friendship. Short flashbacks interspersed throughout give insight into their childhood together and I like that the game shows us rather than telling us about their past together–it feels more organic that way (and beside baby Ren and Iroha are so cute~). While the focus of the story is on Ren and Iroha’s relationship, I wouldn’t call Kohana a romance game, since the the main pair’s friendship is always at the forefront–though one ending does hint at some romantic undertones. Of course larger conflicts are at work in the story, and in the present Iroha is behind a number of attacks on Ren and his shop and it’s up to him to remind her of their past with the help of some sweet Japanese treats.

In lieu of several action based choices, you determine the course of the story at two key points in the story by choosing between specific Japanese confections Ren can make for Iroha. Each treat has a specific meaning/emotion connected to it that will either remind Iroha of her and Ren’s past or convince her to build a new relationship with him in the present. This was such a fun mechanic, since Japanese confections are an integral part of their relationship with one another–which gives the choices this great emotional weight that would be lost with more traditional visual novel choices.

Visually, Kohana is gorgeous, utilizing a softer almost hand-drawn style that gives the game an almost storybook like quality which lends itself well to the game’s Japanese folklore inspirations (I especially loved the designs of the youkai). There is also some fun minor animations throughout which help bring some of the more dramatic scenes to life!

Overall, I loved playing Kohana! It’s a heartwarming story about learning to move forward and living a life that is meaningful to you, regardless of your past. With it’s beautiful art style and emotional character driven story, Kohana is a must play! My only complaint is I wish the game was longer!

Short Otome Games You Can Finish in a Weekend