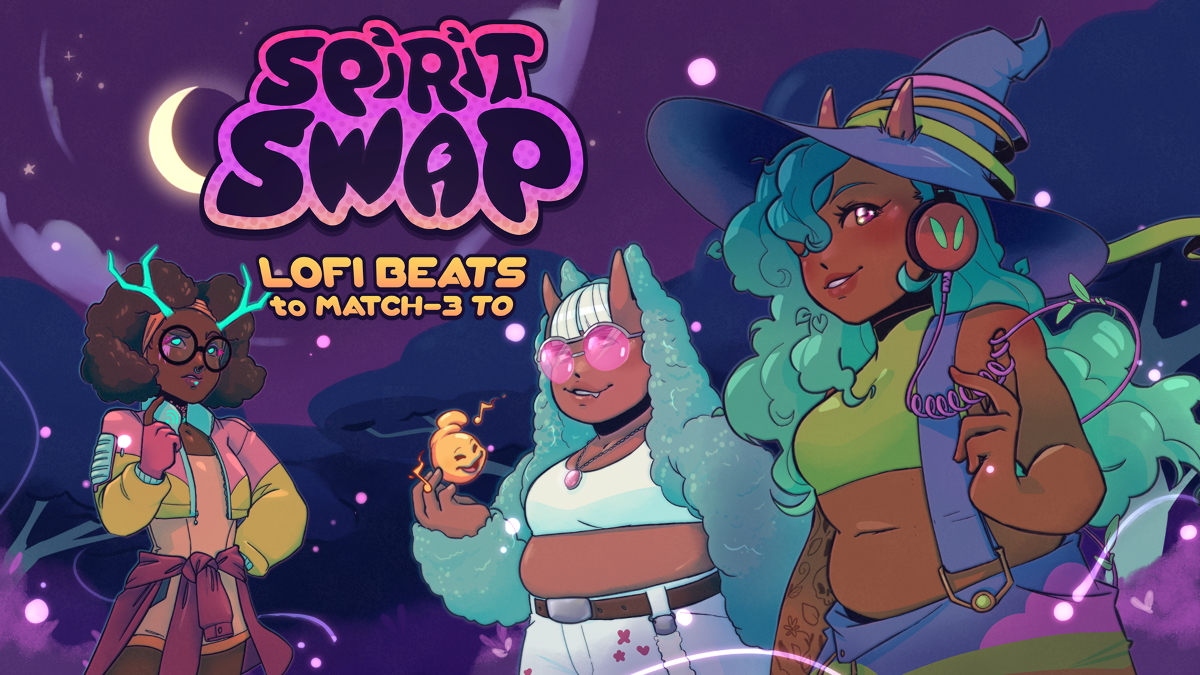 Cast spells, be queer, & crash the biggest concert of the year! Spirit Swap is an action-puzzle game set in a lush, narrative-driven world of witchy demons. Samar is a young witch working the spirit-swapping night shift in the eastern outskirts of Demashq. A recent spike in spirits crossing over from another dimension breaks the chill atmosphere of their night shift. With her trusty familiar Z by her side, she sets off into the city to find out what’s happened. With the popular band, 5SOME, scheduled to kick off their big comeback tour in Demashq, Samar needs to work quickly before the city is overrun with stans and spirits alike….not to mention, they’ve got a pizza party to plan!

Cast spells, be queer, & crash the biggest concert of the year!

You all know that I am weak to inclusive games—as a Black gamer, every time I see Black and brown characters in the games I play my heart does little backflips. So, Soft Not Weak’s lo-fi match-3 game, Spirit Swap, had my attention with it’s cast of beautiful Black and POC characters. But it doesn’t stop there, oh no, this game has some delicious queer rep AND characters with varying body types, and it’s all set to chill lo-fi beats! Play as Samar a young witch working the spirit-swapping night shift in the eastern outskirts of Demashq. Help her restore the chill vibes of her home by rearranging lost spirits via a match-3 puzzle mechanic; also unlock spells that can be used to help you on your quest. Add a bit more action with a fun VS mode!

But, what sets Spirit Swap apart from games like Candy Crush is that you can actually romance some of the other witches and demons you encounter in the game! Hang out with a diverse cast of queer characters, make friends fall in love, or just chill the choice is ultimately up to you! Like it’s diverse cast, Soft Not Weak is made up of queer, Black, and/or POC members, who strive to create a relaxing slice-of-life experience full of characters and stories that resonate with their own experiences. Also, Spirit Swap is set in a fictional city inspired by the Levant, a region rarely explored (in a positive light) in games!

Spirit Swap features a lofi hip hop soundtrack that you can really vibe to, which is the perfect choice for a chill matching puzzle game like this. One of the Kickstarter rewards is a digital download of the soundtrack and trust would happily throw my money at this OST if it’s made available to the public!

Spirit Swap is set to be released in 2022 and it will be a premium release (so no icky microtransactions) and I dunno about you guys, but I am super excited for the official release! BIPOC rep, body diversity, and queer positive vibes all set to a killer lofi soundtrack… what’s not to love?! If you want to support the Kickstarter campaign, there is still plenty of time to throw the Soft Not Weak team some cash!