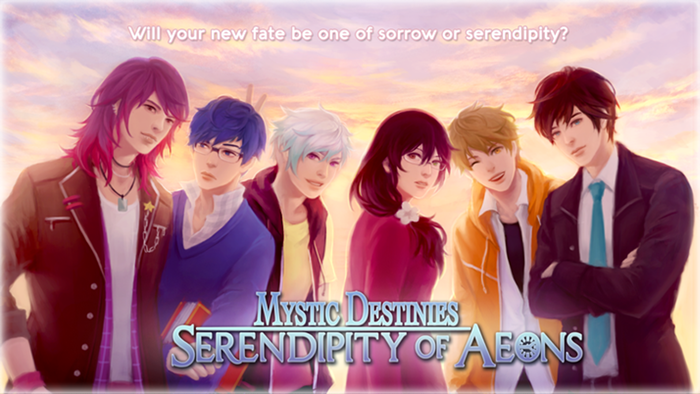 This game was originally on my Summer Game Playlist, but one thing led to another and I never got around to actually playing it before the end of the summer. If I’m being honest, I never intended to get through that list in the first place since I have a habit of getting distracted by new games easily… *cough* Liar Uncover the Truth *cough* So, now that I’ve finished wallowing in mobile otoge hell, I’ve finally decided to revisit some of the games from my poor neglected backlog (so expect many more First Thoughts posts in the coming days and weeks). The first game on the agenda is Aeon Dream Studios’s (aka Star Maiden Games) debut title, Mystic Destinies: Serendipity of Aeons.

Okay, so first things first, Mystic Destinies: Serendipity of Aeons was released back in February and while the prologue and the first chapters of each route are free, the Main Stories and Epilogues are $4.99 and $1.99 respectively. There are five romanceable characters, but as of this post only three guys have been released (number four, Takumi will be released later on this month)…

**Disclaimer: I DO NOT own any of the images used in this review, ALL images, screenshots, and characters belong to Aeon Dream Studios. Please if you are interested in the game, purchase the game either through itch.io or through Steam!!