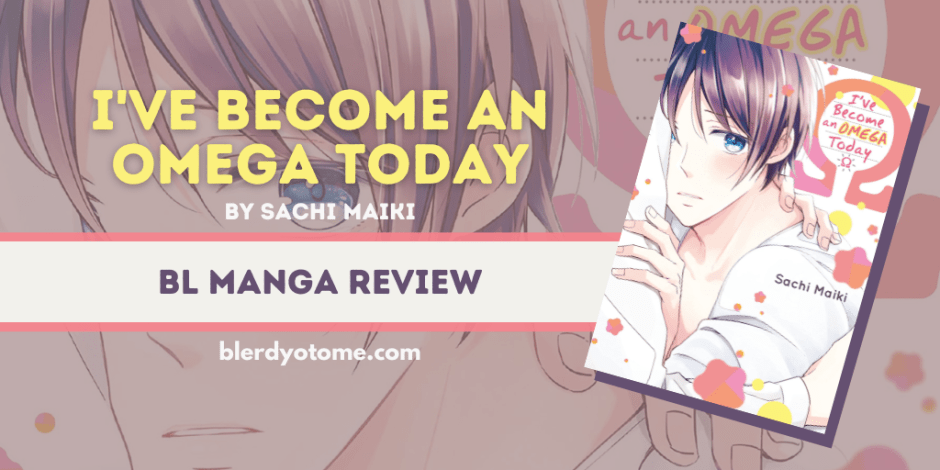 I’ve Become an Omega Today is an omegaverse boys love manga by Sachi Maiki and published in English by Yen Press. Kanade has been in love with his best friend Munechika, an alpha, since they were kids, but when he presents as a beta, his hopes of being with him are shattered forever. But, maybe fate has other plans…

One wish. Ever since they were kids, a single desire saturated every corner of Kanade’s life. I want to be with Munechika. Despite that, his dream was only a dream—any hope Kanade had of becoming Munechika’s was shattered the moment he found out he was a beta. After all, an alpha like Munechika needs an omega… But today, everything has changed.

A Brief Summary of Omegaverse

Boys love is well known enough that most people are familiar with terms like uke and seme. But, I’m pretty sure a lot of folks aren’t as well versed in terms associated with the A/B/O subgenre. While boys love media is a pretty well established genre, omegaverse stories is largely relegated to fanworks and slash fiction–so I was pretty excited when Yen Press announced they’d be licensing this series. Never did I ever think I’d have to explain what omegaverse is in a review, but here we are… Omegaverse or A/B/O is a subgenre of erotic fiction in which people have secondary genders that follow strict dominance hierarchy and partnerships are established with bond marks in the form of bites.

I’ve Become an Omega Today is a pretty standard childhood friend romance–Kanade has had a not so secret crush on his alpha best friend Munechika for years. Munechika is the perfect alpha, smart, handsome, talented; any omega would be lucky to be chosen as his mate, so of course a beta like Kanade doesn’t have a chance. Not wanting to ruin their existing relationship, Kanade resigns himself to staying by his side as a friend and things seem to be going well until Kanade suddenly goes into heat revealing that he’s actually an omega. Now that he’s an omega there’s nothing standing in his way of becoming Munechika’s mate, but things don’t go as smoothly for the pair and they find that their insecurities keep them from fully connecting as partners.

At the start of the volume it’s clear Kanade and Munechika are in love with each other, they just need a little push elevate their relationship from the friendzone. The biggest “obstacle” preventing them from being together, is Kanade’s secondary gender, but that is resolved within the first few pages when Kanade is revealed to be an omega and not a beta like he previously thought. The circumstances surrounding his secondary gender does create opportunities for the pair to become more intimate, but it isn’t until they actually communicate with one another that their relationship starts to really progresses–which is pretty much the norm for most slice-of-life shounen-ai romances. I’ve Become an Omega Today does have some brief sex scenes and while they’re nice, it’s nothing a seasoned BL fan hasn’t seen before.

Honestly, this could have just as easily NOT have been an omegaverse series for as little as the premise matters in the grand scheme of things. Kanade’s heats being the most prominent A/B/O characteristic in the story, and bond marking while present is a blink and you’ll miss it event without the usual fanfare I’ve seen in AO3 fics.

Omegaverse stories can get a bit smutty, since a large part of the A/B/O dynamic revolves around mating and heat cycles, so I am genuinely surprised that I’ve Become an Omega Today is so tame. I get it, omegaverse is pretty out there for most folks, so easing readers into the world of A/B/O with something lighter is probably a safe bet for one of the first BL omegaverse print releases. BUT the A/B/O lover in me kind of wanted something with a bit more spice. Overall, I’ve Become an Omega Today is a cute lighthearted standalone volume that will serve as a good introduction to the world of omegaverse.

Where to Read I’ve Become an Omega Today

Looking for more wholesome reads? Check out these reviews!

A quiet story that stays with you, I Hear the Sunspot is the perfect addition to your manga library.

Classmates is a wonderful story of first love and all the new, exciting, and messy aspects of falling in love…