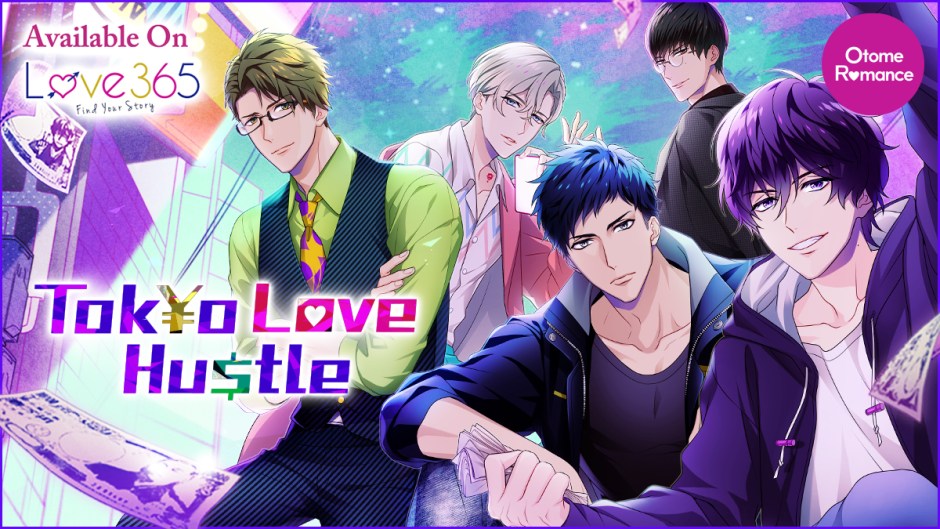 Tokyo Love Hustle is the latest Love Choice title in Voltage Inc.’s Love 365 App. Originally released in Japan in September 2021 as S Kyuu Renai, the game made its English language debut early November 2021. This story centers around the heroine becoming entangled in the lives of a band of phony psychics. In this fast-paced comedy, these guys seem utterly clueless as to how romance is supposed to work, but through a series of curious events, the bonds of friendship and love grow.

Tucked away in a dingy corner of Shinjuku is an agency of fake mediums. They use their winning smiles to swindle the easily deceived out of a ridiculous amount of cash!

Due to certain circumstances, you find yourself working alongside these unprincipled men.

“Well, what’ll it be? Want to increase your chemistry with me?”

Throw all you know about love stories out the window. This one will turn your life around!

“Can you NOT make me into some reverse harem heroine?” *cries*

In Tokyo Love Hustle the MC works as a temp at a talent agency and despite giving the job her all her boss lets her know that they won’t be renewing her contract with the company (something I can ABSOLUTELY relate to). Not wanting to lose her job she begs her boss for one more chance, so he tells her that if she can find someone for a bit role in an upcoming movie he’ll reconsider giving her the boot. With her job on the line the MC sets out to find someone for the gig, but she doesn’t have much luck, that is until an old coworker offers to connect her with a super popular VTuber named Rin.

Excited at finally catching a break MC-chan meets with Rin about the gig and they begin preparing for the role and it finally looks like things are turning up for our heroine. Unfortunately all of their hard work is for nothing, as just before the big audition the MC finds out that the powers that be have already picked someone for the role and the whole audition is just a formality. Rin, undaunted by the news still wants to do the audition and they plan to meet up at the venue the next day. But, instead of Rin being a super cute girl like the MC expected Rin is actually a super cute guy.

They head into the venue only to discover that the dance routine they practiced for the audition is different from the one everyone else is doing–apparently her boss intentionally set them up for failure. Not wanting Rin to embarrass himself the MC offers to withdraw him from the competition, but Rin decides to do the audition and against all odds wins the role. But, despite winning the MC’s boss tells her he had no intention of honoring his end of the bargain and to add insult to injury makes her last task to get Rin officially signed as their newest talent.

So with heavy heart she meets up with Rin to sign all the paperwork, but when he finds out that she has been fired he turns down the gig and the contracts. He then reveals that he actually moonlights as a medium and offers her a job at his company to thank her for all her hard work–being the sentimental sap that she is the MC doesn’t question this at all and agrees. Once all the papers are signed Rin reveals that he’s a fake medium who swindles people out ridiculous amounts of money and this has all been an elaborate ruse to trick here into working for him… Now the MC is the newest employee at the Mado Psychic Agency!

So, there are five love interests to choose from–though as of this writing only Suzumu Mado and Taro Akuchi’s routes are available to play in the Love 365 app. Each of the guys work as part of the Mado Agency in some capacity whether that is in book keeping, meeting with clients, or just information gathering. All of the guys have their own distinct personalities and motivations.

I have been hesitant to play the Love Choice titles in the Love 365 app because when you add up the costs of hearts per route they cost significantly more than the standard pay per route titles–in LC games it’s about $20 to unlock the Best ending as opposed to the $3.99 per route in the standard titles. But, there’s just something about Tokyo Love Hustle that piqued my interest and I had some hearts saved up, so I figured there was no harm in playing up to till the second paid choice and, y’all I love this game so much! I did not expect to have this much fun–I was hooked and quickly blazed through all of Suzumu’s route (and I have just enough hearts to play through Taro’s route too).

Now, the game is definitely more of a slice-of-life comedy than an outright romance, so the relationship between the MC and her chosen LI is more of a slow burn than I’m used to, but it works. Because the entire cast is fantastic, the dynamic between the LIs is super chill and fun and I live for a good bromance. And boy does this game like to tease you with the other LIs–yes, I’m talking about Aiji, that man should come with a goddamn warning label!

This is such a dynamic cast of characters and I love seeing their different personalities playing off of each other, and the chemistry between everyone was so good that I didn’t even mind the “romance” taking a back seat. Like Aya and Taro poppin’ off at each other every time they’re in the same room to Haru’s mothering of the guys, and even the brotherly bond between Taro and Suzu. My favorite moments were when everyone was just hanging out together. The writers take the time to really establish all of the characters and not just the LI, which is something you don’t see a lot of and it was honestly refreshing. It makes the character interactions feel so much more organic and fun.

Like I said the romance is very much a slow burn, so if you’re expecting a big dramatic confession scene or over the top romantic gestures–this is not the game for you. But, somehow it feels more natural to have the MC and her chosen guy as just friends (with the hint of something more) at the end of the route. Cus let’s be real falling in love takes time and it’s always been unrealistic for the characters to fall madly in love after a few days of knowing each other.

The art is really nice I love the character designs (especially Aiji, that man can get it), but the real stand out is the music! Voltage did not have to go this hard with the background tracks, from sultry jazz numbers to light swelling instrumentals every track was gold!

So is Tokyo Love Hustle worth continuing?

Heck yeah! I already finished Suzumu’s main story and I fully intend on playing Taro’s too! Tokyo Love Hustle is absolutely hilarious, I could not stop laughing at this game, from the ridiculous premise to witty writing and over the top characters everything about this was a riot. Stuff like a bar full of burly men who put on a pole dancing show or the playful banter between the LIs or, hell the MC’s internal dialogue (this is one of my new fave Voltage heroines). I love this MC so much, she is funny and witty and snarky and just an all around delight! Definitely highly recommended!