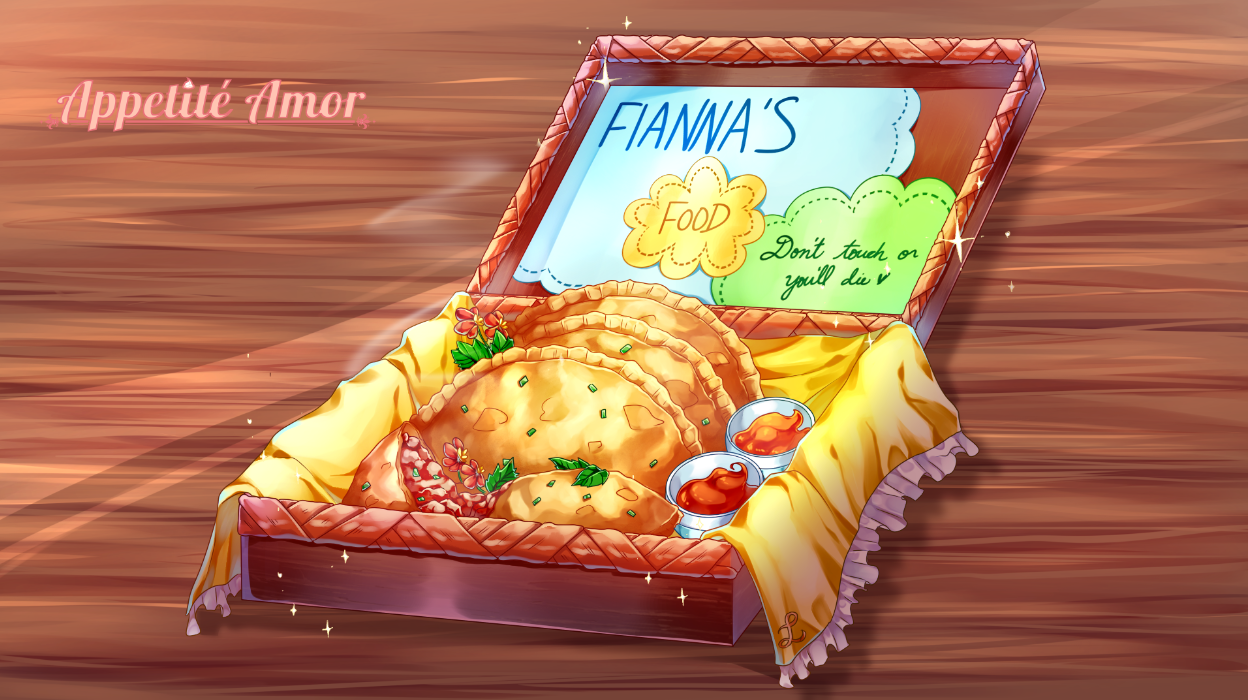 Appetite Amor is a short romance indie visual novel developed through a collaborative effort between Akua, Midge, Azuremia, pumpkin spike, illegalileo, and Foleso fot the game jam Nanoreno 2021. Take on the role of swordswoman, Fianna who frequents Café Amor, a place to go for delicious treats and amazing company. But, Amor isn’t an ordinary café, run by the enigmatic Leon, Amor serves up some otherworldly treats—which is just perfect for Fianna, since adventuring sure does work up an appetite!

Fianna is good at anything she puts her mind to — which usually involves trying to max out her stats, inhaling copious amounts of food and doing her best in avoiding getting into Guild House brawls. A pleasant twist of fate leads her to find Café Amor and its otherworldly — quite literally — chef, Leon.

Join Fianna and Leon as they face magical beasts, mysterious entities and something far more strange and wonderful than anything they have ever faced: their growing relationship.

The Way to Gal’s Heart is Through Her Stomach…

Food porn, a cute blushing boy, and a strong female lead—Appetite Amor checks off a lot of things on my “otome musts” checklist. This is the wholesome fantasy café visual novel that I’ve been craving (and yes this is another jab at Café Enchante, because I’m still not over Misyr’s route). Appetite Amor is just a lot of fun! Fianna is a breath of fresh air, she’s a female warrior who who loves delicious food and adventure. While heading to the Guild House to pick up her next quest, she gets horribly lost and winds up stumbling upon a secluded café.  Lured in by the delicious smells coming from inside she pops in for something sweet to snack on, what she finds is an array of desserts on display and an even more mouthwatering sight, the handsome cook, Leon. They strike up an easy friendship and Fianna becomes a regular patron at the Amor.

I love their relationship–Fianna is a bit of a genki girl, always upbeat and facing things head on, while Leon is more straight laced and easily flustered. It’s a cute dynamic and I’m a sucker for heroines that tease their LIs and Fianna has no shame when it comes to Leon. They’re just so comfortable around one another and it’s refreshing to play a game where the love interests aren’t nervous, sputtering messes when they’re together. Leon and Fia can hold a conversation and joke around with each other and it’s just so chill and fun, they have fantastic chemistry and it really comes out in their interactions with one another. There isn’t any awkwardness, just two good friends who just happen to catch feelings for one another while out adventuring. There’s even this really cute moment when Fia has to princess carry Leon and it’s just so much fun—especially that The Legend of Zelda TV series reference! 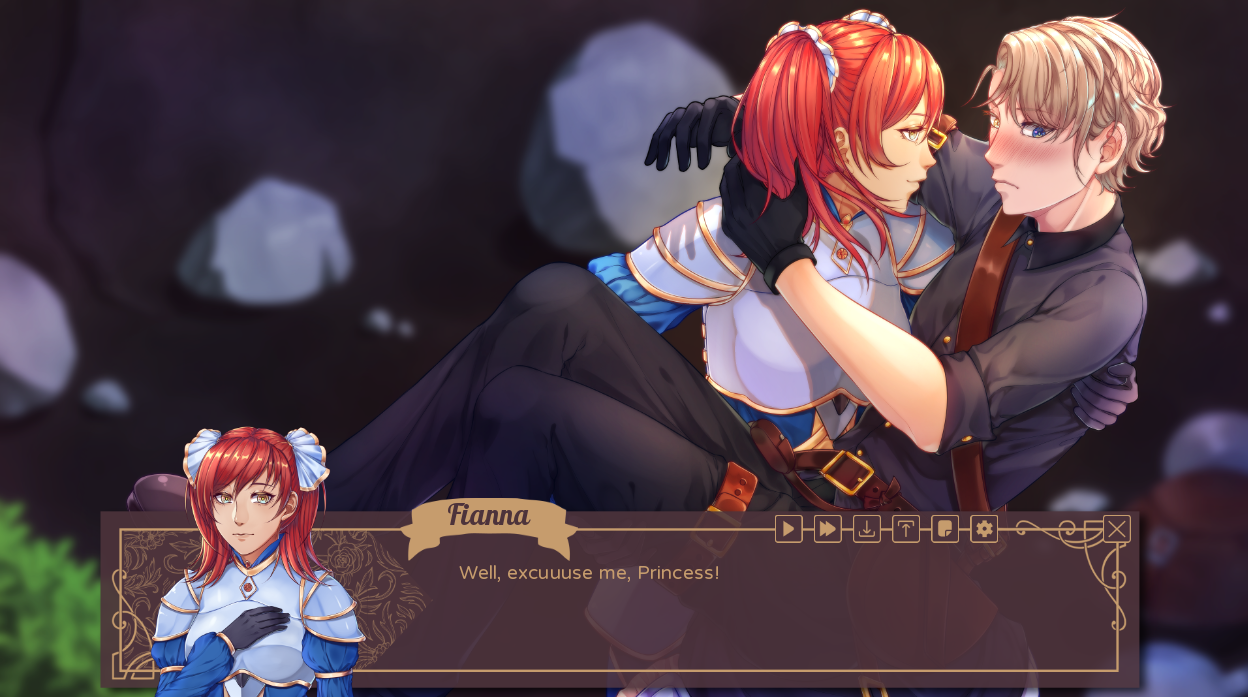 The story hints that Leon is from another world and it’s implied that he may be from our world, kind of like Howl being from Wales in Howl’s Moving Castle—but aside from his knowledge of movie nights he doesn’t seem to have any special magical abilities, unless making delicious treats counts. And oh my God don’t get me started on the FOOD PORN in this game!! There are three or four dishes that Leon makes in the game and they each get their own special CG and let me tell you, they are gorgeous! I especially love the little bento box ones~ Of course there are also two romance CGs and they’re equally pretty and the character sprites are really well done—seeing Leon in a frilly pink apron is just *chef’s kiss* and I love that Fianna is decked out in armor! 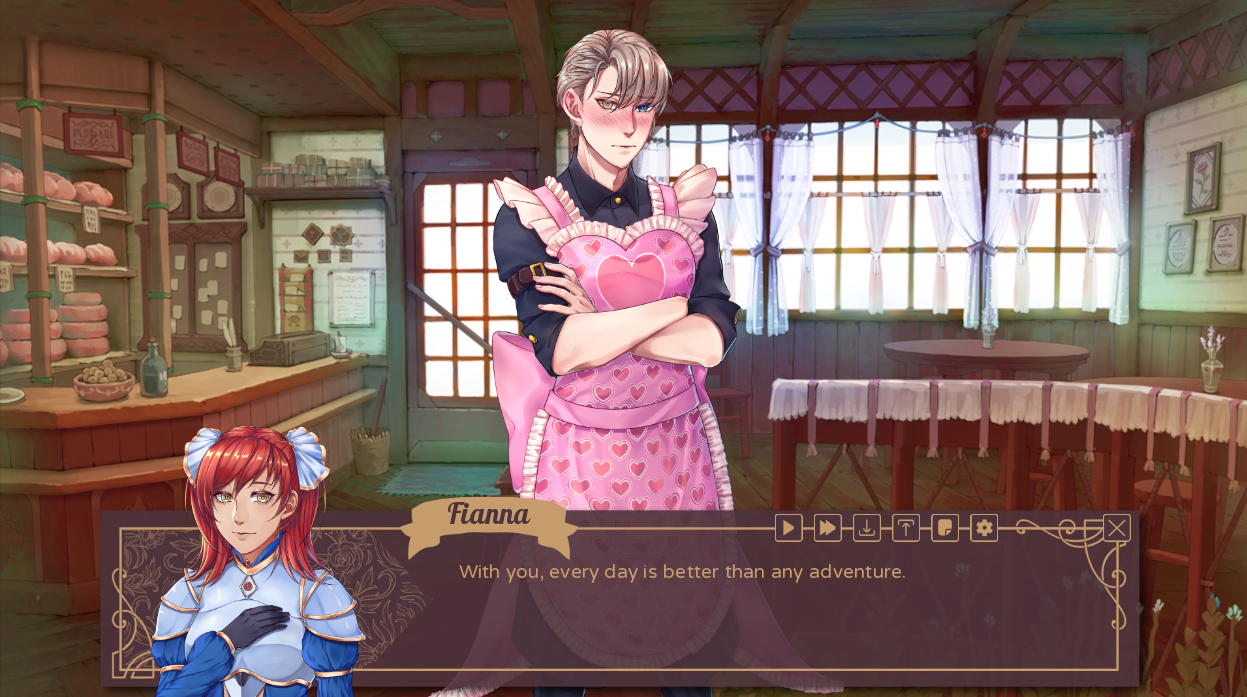 This is the super cute café romance I have been craving! Appetite Amor is just a cute and funny romance about a female knight and an otherworldly cook who makes delicious treats. There really isn’t anything in the way of a complex plot or character drama, just a little bit of adventuring and a lot of tasty treats.  There are three endings: one cute romantic one, one that’s kinda bittersweet, and another that’s more of a gag ending that you can unlock early on in the story. I also have to give it to the devs for having quite a few choices, some of which gave me a good laugh. All in all this is a really well made game!

Nanoreno, is an annual one-month game jam that is held from March to early April where developers are challenged to create a visual novel in the allotted time frame. The game jam is open to newbie devs and veterans alike and every year I am blown away by the submissions—this year there were 89 submissions ranging from romance to parody to everything else in between.

There’s a lot to get through, so throughout the month of April I will be covering as many of the submissions as I can, while giving special attention to indie otome and the romance VN titles.