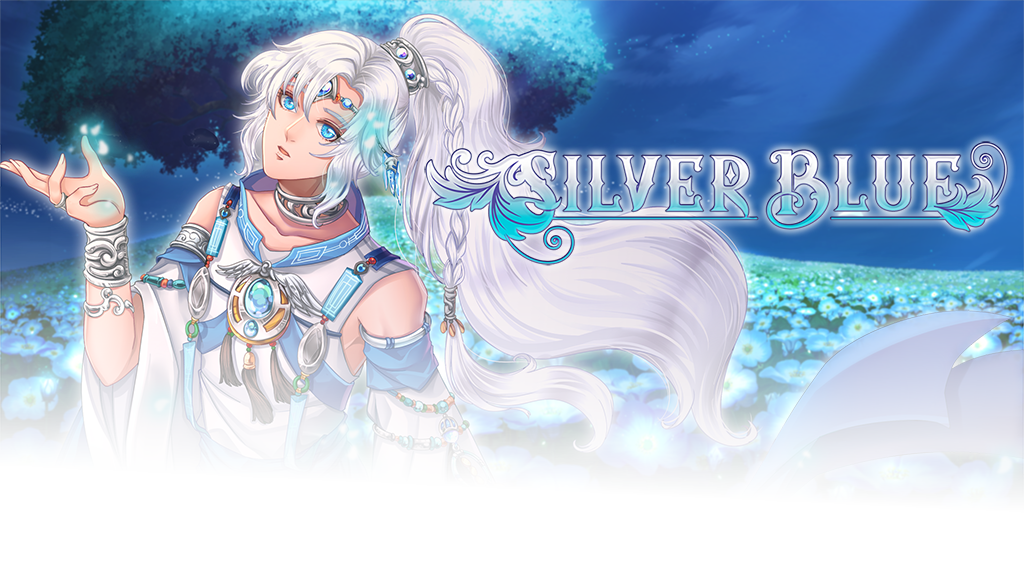 Hey Blerdy Tribe, I’m back with another demo review—this time around I’m covering Bun Bo Soup Team’s upcoming fantasy adventure boys love visual novel, Silver Blue. The game is currently in Kickstarter and the team is really close to reaching their goal, so I figured this was the perfect time to share my thoughts on the project—in case you’re still on the fence about supporting the campaign.

Silver Blue is unusual for a boys love game, because unlike other titles from the same genre, this game was conceived to be something that anyone of all ages can enjoy. So, there will be no sexual content in the final release of the game—and you know what, with the overabundance of sex in boys love media, I can appreciate that. I love shameless smut as much as the next fujoshi, but every now and again you want something with a bit more substance. So, with that in mind, let’s dive into this review!

Where to Play the Demo: Itch.io

Silver Blue follows Cyan, an orphan with no memories of his past and as a result he feels disconnected from other people.  He is taken in by a traveling merchant named Gui, and the two live a pretty peaceful life until one day Gui just up and leaves. Of course, Cyan is not okay with this and sets out to find Gui and bring him home. On his journey, Cyan meets several strangers who offer to help him–some of whom seem to know an awful lot about Cyan and his long forgotten past.

So, right off the bat I was impressed with the demo’s gorgeous artwork, Silver Blue has to be one of the prettiest games I have played all year! That alone was enough to get me in the front door, and even though all of the art assets weren’t complete in the demo I played I have to give the team props for creating something so beautiful! The visuals can really make or break a game, so it’s great to see that Bun Bo Soup has their bases covered in that department this early in the development process.

The story itself is interesting, but some of the finer details get bogged down by the rough English translation. It’s not bad, but, you can tell the English text was either directly translated from another language or that the proofreader is not a native English speaker—as the writing doesn’t really flow naturally. My only hope is that this is fixed for the final release, since the writing really detracted from my enjoyment of the story, which is a shame because there is a lot of great worldbuilding potential.

Silver Blue is set in a world where humans and the gods once lived in harmony with one another, nature flourished and there was peace. As time passed humanity began to drift away from the gods and nature. The demo hints at this bit of lore, even going so far as to suggest that Cyan may have more than a casual connection to the gods of old. The puzzle pieces are all there and it is clear that the story is going to eventually pull everything together… but, it’s juuuuust not all there yet (at least from what I’ve seen in the demo). Everything is just a bit too vague, so you really don’t get a good sense of what’s going on in the demo—events happen, characters are introduced, but there isn’t any weight to it because the writers don’t focus on any one plot point long enough.

Take Gui, he is Cyan’s caretaker, the one person in the world that he trusts implicitly… however we don’t get to see that bond in action—Cyan and Gui spend at max two scenes together and then POOF he’s gone. His disappearance doesn’t really mean much to me, because I don’t really get to see Gui and Cyan interact. A similar situation occurs in Nix Hydra’s mobile game The Arcana, where the player has an existing Mentor/Apprentice relationship with one of the LIs, Asra. The characters spend roughly the same amount of time together as Gui and Cyan, before Asra nopes outta the picture, but in The Arcana  I feel that loss more because we see ¯the player character dealing with Asra’s absence. In Silver Blue, Gui leaves and Cyan immediately picks up and sets out to find him the plot doesn’t skip a beat and it feels more like checking items off of a checklist than a natural story progression. The same can be said for the character introductions—the characters seem really interesting and I love that they all have distinctive looks and personalities, but damn if we spend any real time getting to know any of them.

So, while I have my gripes, I still think this is an okay proof of concept demo—the art is gorgeous (that more than anything is a saving grace) and the characters are likeable enough and I’m curious to see how they hold up in the final release of the game. I want to end this review on a positive note, so I will say I want to know more about the world of the game, I want to know more about Cyan and his past, I want to see where this story is headed… and that more than anything is a huge endorsement. The framework is all there for a great game, it just needs to be fleshed out and reworked in places. Silver Blue is definitely a work in progress and despite my criticisms, I am definitely interested to see how this project turns out.