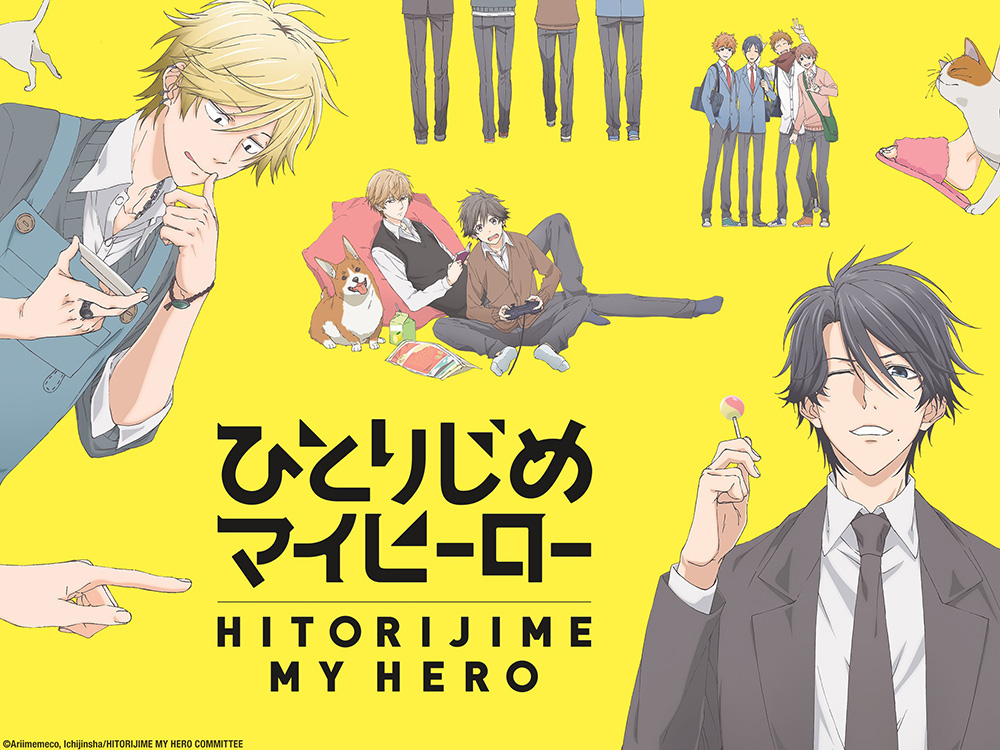 Hitorijime My Hero is based on the ongoing manga series of the same name by Memeco Arii. The series follows, Masahiro Setagawa a high school student who has stopped believing in heroes, especially since the world seems to be hellbent on showing him the worst it has to offer. His mother constantly brings her “clients” home forcing Mashahiro to spend his nights wandering the streets, where he’s “adopted” by a group of local thugs. But, his luck changes when the infamous street vigilante, Kousuke Ooshiba, the “Bear Killer” comes to his rescue and decides to make him his underling. What’s more, Kousuke is the older brother of Masahiro’s best friend and his homeroom teacher! Suddenly, Masahiro starts believing that maybe hero’s do exist, but it seems that his feelings for Kousuke are deeper than either realize… and maybe, Kousuke feels the same way too?! There’s also a B-romance plot between Masahiro’s best friend Kensuke, who has recently reunited with his childhood friend, Asaya Hasekura.

Hitorijime My Hero isn’t reinventing the wheel here, and it’s certainly no Given, but it does make an effort to tell a decent story with likeable characters and more or less healthy relationships, especially when compared with the stuff that usually comes out of the boys love genre. The pacing can be a bit hit or miss, and I didn’t quite understand the choice to have the first three episodes of the series focus on the beta couple: Kensuke and Hasekura. The first time I watched the series this kind of threw me for a loop since I knew Masahiro and Kousuke were the main couple. But, then I read the manga and it all made sense. Episode 4 marks the actual start of the manga’s story, and at that point Kensuke and Hasekura are already an established couple. I found out after the fact that there is a one volume prequel series Hitorijime Boyfriend that focuses on Hasekura and Kensuke’s reunion and the start of their relationship. The studio probably combined the two series so as not to confuse people who hadn’t read the prequel manga. But, it definitely helps establish Hasekura and Kensuke as characters before getting too deep into the relationship woes of the main pair, which was something that was missing in the manga.

In fact the whole story gets an adaptation upgrade, the character dynamics between the main couples are more fleshed out and the anime tones down some of the more frustrating yaoi/BL tropes. The anime doesn’t completely eliminate them, but like I said, Hitorijime My Hero isn’t trying to revolutionize the boys love genre. Both couples have issues with manipulation and control, though to varying degrees. Hasekura straight up manipulates Kensuke into “realizing” his feelings for him, by constantly making romantic overtures towards him. Kensuke being the typical naive uke, dismisses his advances until Hasekura gives him the option of accepting his feelings or breaking off their friendship. Then you have you have Kousuke, who knows that Masahiro has feelings for him and rather than just defining their relationship, he spends the majority of the series givving off mixed signals. One minute he’s trivializing Masahiro’s feelings, the next he’s kissing Masahiro in the middle of a school hallway…. bruh, make up your damn mind! But, even this is infinitely better than the hypersexual Kousuke we get in the manga, at least in the anime, he respects the fact that Masahiro is his student (and still a minor) and doesn’t attempt to get too handsy with him.

The boys love genre is known for having questionable character dynamics and Hitorijime My Hero is definitely goes a long way to correcting some of the manga’s flaws. We are introduced to Masahiro and Kousuke as individuals first, establishing who they are as characters long before anyone starts throwing around the L-word. Masahiro is a good kid with good intentions, but, really crappy circumstances. His mother is implied to be a prostitute and he’s the gopher boy for a group of local thugs. He’s had to fend for himself a lot, since he doesn’t have anyone in his life that he can truly rely on, and I guess that’s what really resonated with me about the series. Masahiro isn’t out looking for love, rather, he’s just looking for a place where he belongs, and Kousuke steps in to fill that void. Sure, there’s an inequality to their relationship, since Kousuke is much older than Masahiro and there’s also the whole teacher/student dynamic thrown in for extra measure. But, Hitorijime My Hero takes the time to go beyond the ‘will they, won’t they’ drama and really establishes how the characters are affected by their relationship. Both Kousuke and Masahiro are made better people by being together, and I guess that’s what I really love about this series… I’m a sucker for feel good stories…

Hitorijime My Hero plays it safe, never delving too deeply into anything too dark, the comedy can be a bit much at times, but there were a few moments that got a genuine laugh out of me. Rather than focusing overly dramatic storylines, Hitorijime My Hero has conflicts that are easily tied up within one or two episode arcs. The entire Kensuke/Hasekura relationship drama is wrapped up by the end of episode 3, and then they’re relegated to supporting cast members for the rest of the series. A few episodes later one of Masahiro’s friends finds out he’s in a relationship with Kousuke causing a rift in their friend group… resolved in a single episode. Even the obligatory misunderstanding between Kousuke and Masahiro is fixed within a neat two episode arc… but it still gave me a case of the warm fuzzies, so the anime was doing something right!

I swear Hitorijime My Hero is the only reason my Amazon Prime account gets any use, I must have watched this series like 10 time already… and it’s not even one of those prolific boys love series. Hitorijime My Hero, is a standard teacher x student romance which is fairly common fare in the boys love genre, and I don’t particularly care for the beta couple, but there is just something about the series that keeps me coming back for more.

The series is only 12 episodes long and pretty tame in terms of boys love content, so if you’re just starting out on your BL journey, Hitorijime My Hero is a good jumping off point. Equal parts comedy, slice-of-life, and romance, with just enough cute moments to get your heart fluttering. Also the opening theme song “Heart Signal” is life!!

4 thoughts on “We All Need A Hero: Hitorijime My Hero Series Review”