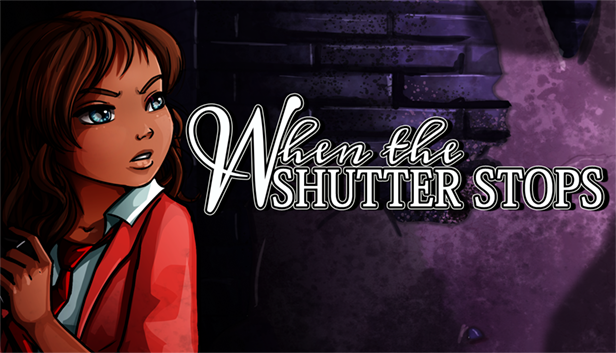 Hey Hey Heroes, Travelers, and Wandering NPCs, I recently discovered this really great demo and I just had to share my thoughts about it! Unlike most of the games I cover here on Nice Job Breaking It, Hero this one isn’t a romance per se, I know, le gasp. This time around I’m covering a visual novel that’s more akin to investigative adventure games, like Ace Attorney and Professor Layton but with the grittiness you’d find in the film noir of the 40’s and 50’s. When the Shutter Stops is an upcoming mystery detective game and the debut title of the up and coming indie developer Remort Studios. The game follows Priscilla “Pri” Vate a former child detective who finds herself being dragged back into the city’s gritty underbelly when the serial killer she put away years ago suddenly has his conviction overturned.

The game is currently on Kickstarter and I strongly suggest throwing your support their way while they work to reach their $10,000 USD funding goal. When the Shutter Stops is a mid-length commercial release, with the final asking price of just $25.00, but, if you support the game during the KS campaign you can snag a copy for just $20.00. This is an alpha demo so there are a few assets that aren’t fully realized yet, but, it does cover a good bit of the expected gameplay, including the investigative and interrogation portions of the game.

I said this in the Kickstarter post I did, but, I am a sucker for investigative detective adventure games, so When the Shutter Stops is definitely right up my alley. The demo covers the beginning stages of the Dart Killer case and introduces players to some of the key characters from the main game. Alpha demos are usually pretty hit or miss, since most of the game’s assets aren’t done by the time of the release, but, I was impressed with the quality of this one. Not only does it give you a good feel of what to expect in the final version of the game, but, it leaves you wanting more. The demo ends just as Pri and her partner are about to meet up with the boyfriend of their victim and I kid you not, I groaned when the “Thank you for playing” message flashed onto the screen.

Unlike the final release, which focuses on an older now retired Pri as she navigates her adult life and the ghosts of her past as a detective, the demo follows Pri during her child detective days. If you’re expecting this to be Detective Conan, you’ve got another thing coming. While Pri possesses the keen observation skills and heightened intellect on par with that of Conan Edogawa, her personality is more like that of a curmudgeonly world weary gumshoe far older than her young age and I like it. She doesn’t take crap from anyone, and there’s just something fun about seeing a child act like a grown man, swearing and throwing shade like a champ. The first time we meet Pri she’s telling a client that his wife is cheating on him with his mother and I kid you not, she calls the wife a literal “motherfucker” to the guys face.

She gives no fucks, and it’s that kind of confidence you’d expect from a pint-sized detective and rather than seeming out of place, it fits. Being a detective is no easy task, you see the absolute worst people have to offer, so it stands to reason she’d be a little jaded, she’s seen stuff kids her age (and some adults) will thankfully never see. Then there’s the fact that she is in fact a child, so she has to throw her weight around a bit to prove her worth.

The side characters were solid, more like set pieces for Pri to play off of than fully fleshed out characters, granted, the demo only tells a small portion of the story, so it’s not a deal breaker. There are a lot of tradition detective character archetypes here, the hapless rookie cop, the jaded detective, the seductive woman, and of course who could forget the veteran. There’s even this fun thing they do with some of the characters’s names that kind of reminded me of the punny naming of characters in the Ace Attorney franchise.  Like the cops are referred to as A and B, despite having actual names. One of the witnesses/suspects is named Valerie Fatale, which is a subtle callback to the femme fatale character archetype of an attractive woman that ultimately leads her lovers into harms way that is common in film noir. It’s that kind of on the nose wit that makes this such a fun story, it’s the small details that help evoke the spirit of the film noir genre that the game emulates.

But, that’s not all, When the Shutter Stops doesn’t just talk the talk, it walks the walk, taking players through the different stages of an actual investigation. In addition to the usual visual novel choices, players can also investigate crime scenes and interrogate witnesses and suspects. Both aspects of gameplay offer a more interactive gaming experience. The demo features two investigative segments (one a crime scene, the other a suspect’s office) and one interrogation sequence and I had a lot of fun picking through the insignificant details of the different locales on my search for clues, though, point and click investigation sequences can be just as frustrating too, since it’s easy to get stuck. 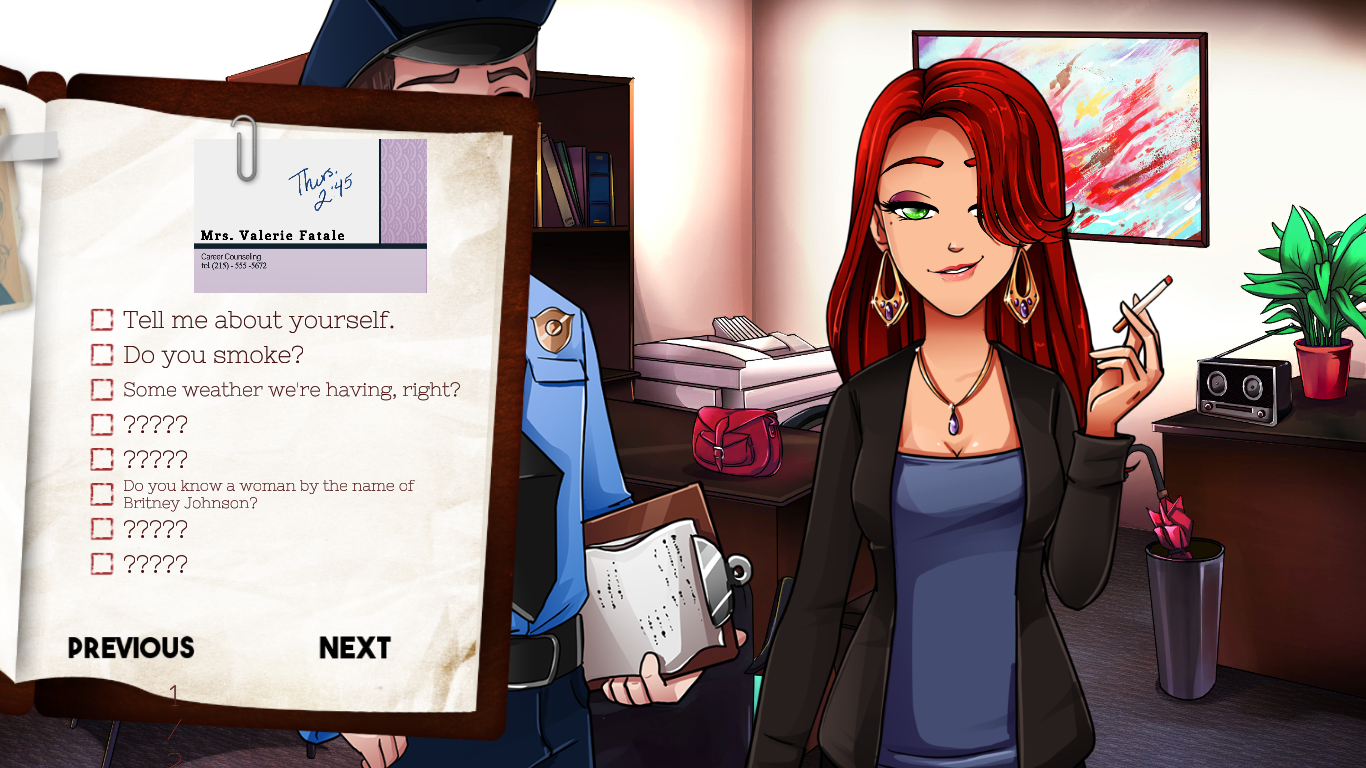 I really enjoyed the interrogation segment, since it gives one on one time with the suspect. At the start of the interrogation a few questions are available, based on your conversation with the suspect or just preexisting info about the case. As you pursue different lines of questioning them, new options will open up, so you can flesh out the details a bit more. But, you can usually tell when you’re on the right track, because the suspect will either try to dodge the question or have a total meltdown. This is just a really fun way to flesh out the characters while also moving the story along, albeit in a non-linear way. This is very much your investigation, so you have the freedom to poke, prod, and question anything and everything at your leisure, which I appreciate in my detective games.

When the Shutter Stops is an homage to all those great detective flicks of old, but with a modern twist. Remort Studios did a fantastic job of blending the dark and edgy film noir feel of films like The Maltese Falcon with the interactive investigative story elements of mystery adventure games like Ace Attorney and Hotel Dusk. So if you’re a fan of any of the things I mentioned, you should totally give this demo a try… like ASAP! I fell in love with When the Shutter Stops from the moment the opening instrumentals of the title screen started playing and I can’t wait to see what’s in store for us in the final release!

But, don’t just take my word for it!! Check out the demo or take a gander at the game’s trailer below! If you like what you see, play the game, hit the like button, share, or comment! As always, Thank You for Reading!!

You can also contact Remort Studios on Social Media through the following channels: