I don’t know what made me buy Tauxolouve’s main story, since I wasn’t remotely interested in the guy at all… Mature playboys just aren’t my type at all, but there I was playing his route until the butt crack of dawn, and not only did I enjoy it… I found myself falling hard for the guy! 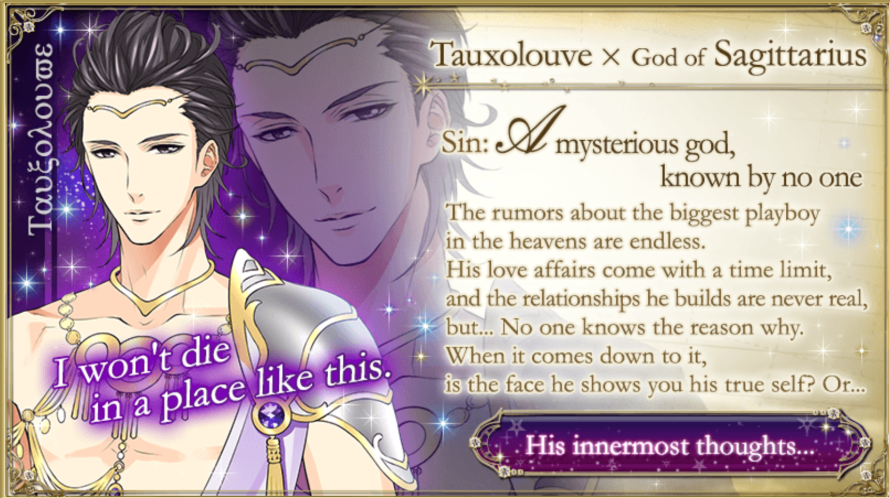 Tauxolouve is the god of Sagittarius and while outwardly he’s a bit of a tease, the real Tauxolouve is much more compassionate and steadfast than folks give him credit for. Sure he talks a big game, but he never actually acts on any of the suggestive things he says. Is he really a womanizer like everyone says, or is it all just an act?

I went into this route ready to hate it, with his just been sexed hair and bedroom eyes, Tauxolouve had tease written all over him. But, contrary to his looks, Tauxolouve is much more understanding than I originally gave him credit for, don’t get me wrong, he does say some very suggestive things from time to time, and he does seem to just coast through life, but deep down he’s a gentleman. While he talks a big game, Tauxolouve would never dream of forcing anyone into doing anything that they’re uncomfortable with, and aside from a bit of teasing at the beginning I had a really hard time believing that Tauxolouve was as big a flirt as the other gods said he was, he just didn’t give off the usual fuqboi vibes.

In fact, he goes out of his way to make sure that the MC adjusts to her new situation and when Zyglavis wants to keep her under lock and key until the Dark King is apprehended, Tauxolouve is the first one speak in favor of letting the MC continue to go about her daily routine. So it wasn’t long before I started to question whether the rumors about the guy were really true. He’s quick to smile and say suggestive things, but his actions just don’t match up with his words. He never really follows through on any of his advances, at most he’d say something suggestive only to laugh it off a few minutes later like it was all some big joke. It was like he wasn’t really all that invested in his playboy persona to begin with, which got me interested in learning more about the real Tauxolouve. 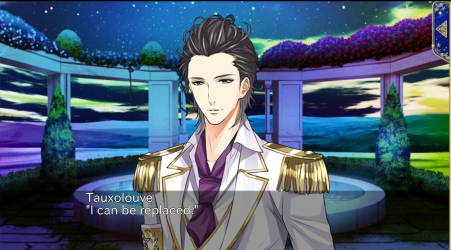 There are a lot of similarities between Tauxolouve and Ichthys, both men hide their pain behind carefully constructed smiles and lighthearted personas. But, where Ichthys really is a prankster at heart, Tauxolouve is a downright gentleman through and through, with parents that love him, yes you read that right, Tauxolouve has a warm and loving family! This is a first for Star Crossed Myth, none of the other gods so much as mention their family unless it’s coupled with some tragic event or another…. well maybe Krioff, but that was more on the bittersweet side of things… The fact that such an infamous playboy has such a stable home life only further pokes holes in his already flimsy playboy persona. It just doesn’t add up at all, and that’s when Voltage decides to hit us with the mother of all tragic backstories. I know that Voltage likes to lay it on thick with their flirty characters, but Tauxolouve takes the cake, the poor guy definitely gave Ichthys a run for his money in the tragedy department!

Tauxolouve has a really good reason for acting the way that he does and I’m not gonna lie, it broke my heart! There were some hints about it early on, but they were very subtle, blink and you’d miss them moments… Like the reckless way he fights the Dark King in the first few chapters, or the fact that he only dates women for two weeks before dumping them, he just doesn’t seem to care what he does with his life. You see, Tauxolouve is the type of character that hides his true feelings behind fake smiles and sweet words, while he desperately wants to get close to other people, but due to circumstances beyond his control, it just isn’t possible. While this isn’t a new storyline, we saw something similar with Ichthys, I was impressed with the way Voltage switched things up from how they usually deal with flirty characters. For once, I didn’t feel the urge to snap my iPad in half every time Tauxolouve opened his mouth so kudos Voltage, well played!

There was a lot going on with this route, and I mean a lot, but at no point did any of it feel rushed or out of place. The romance, while it did progress rather quickly from both sides, was very well done. The MC realizes early on that Tauxolouve isn’t a womanizer like everyone thinks he is and that goes a long way towards her understanding who he really is as a person. It’s her ability to see through his BS that leads Tauxolouve to open up to the MC about his past and his abilities. Despite his efforts he lets the MC into his heart and once he does, there is a noticeable difference in his outlook on life. But, just when their relationship seems to be headed in the right direction, tragedy threatens to ruin the little bit of happiness Tauxolouve has been able to make for himself.

Damn Voltage, way to hit me in the feels and with a character I wasn’t all that interested in to begin with! While Tauxolouve looks like a ladies man, what with his slicked back hair and flirty wink, you shouldn’t judge him solely on his appearance. He quickly became one of my favorite gods Star Crossed Myth! I did not expect to fall head over heels for the guy, in fact I was just going to pass on this route altogether, but I am so glad that I gave him a chance! At first glance, Tauxolouve is a shameless flirt, but the more time we spend with him the less that facade holds up, it’s the little inconsistencies between his words and his actions that really made my heart go doki doki.

Storywise, this is definitely one of the best in the game! There is a marked difference between the writing for the first six gods and the last six that really makes the later releases stand out. The stories are much more complex and the character development is on a whole different level! As I mentioned earlier, this route touched on some things that weren’t addressed in the earlier routes, namely the logistics of a human/god relationship… (no, it’s not in the way you’re probably thinking) and I’m interested to see if this will be explored again in the other routes later on… Also Tauxolouve isn’t a normal god, I guess you could say he’s one of a kind. *wink wink*

In the end, if you couldn’t already tell from the THREE reaction gifs I used, I definitely recommend giving his main story a play through, Tauxolouve was an absolute dream and the overall progression of the story was fantastic! But, be warned, this route will definitely hit you in the feels!