Hello all you wonderful Heroes and Travelers, it’s Black History Month here in the States, and I wanted to do something to celebrate it here on Nice Job Breaking It, Hero! As a Black nerd, I love it when I see characters that look like me in anime, on tv, and in video games. But, more times than not, they’re reduced to side characters or insulting stereotypes, so I want to use this month to highlight a few outstanding black and brown skinned characters. So every Monday from now until the end of the month, will be hence forth known as Melanin Monday!! As of right now this is just a one month thing, but if you guys like it, I might be persuaded to extend it!

So for my first Melanin Monday’s post, I wanted to write about five of my all time favorite Black female anime character!! Each of these beautiful brown sistas, are phenomenal women that shine in their respective anime series! Because I think all the ladies on this list are fantastic, this won’t be a ranked list, I love them all equally!!

Oh, before I kick things off, I want to say a huge thank you to Hazel of Archi-Anime for making the super special awesome Melanin Mondays banner!! She did a fantastic job with it and I can’t thank her enough for doing it on such short notice!! *hugs*

So I thought long and hard about which character would have the honor of kicking off this list, and after playing around with a few ideas I settled on MI-6 agent, April from Darker Than Black! While she isn’t considered a main character in the series, April more than deserves a spot on this list!

April is a contractor with a pretty awesome power, she can manipulate the atmospheric pressure in her immediate area to create hurricane like weather. When combined with the powers of fellow MI-6 agent, November 11, she’s a force to be reckoned with! Also, unlike some of the other contractors on the show, that hate their Obeisance (contract payment for using contractor powers), April actually enjoys her task; drinking beer. Little is known about her past prior to her appearance in the series, but the mystery of it all makes her that much cooler!!

This anime is a bit older now, so I’m not sure how many of you guys will be familiar with Nadia and how great of a character she is! Despite being only 14 years old, Nadia is a phenomenal leading lady with some strong convictions and confidence that would make folks twice her age jealous! She can be a bit rough around the edges at the start of the series, having had to deal with her fair share of misfortune, but she really turns things around as the series progresses.

Nadia is an orphan circus acrobat, with no idea who she is or where she came from. She’s headstrong and a bit stubborn, used to doing things her own way to survive. Nadia is very distrustful of other people, preferring the company of animals, to the point that she doesn’t tolerate any violence towards them (she’s a vegetarian). While she appears to have everything together, Nadia still has a lot of growing up to do and I loved watching her growth over the course of the series!

Okay so I’m well aware that Michiko to Hatchin takes place in South America and technically, she’s Latina, but you’ll have a hard time convincing me that Michiko doesn’t have a little bit of the Motherland in her! This beautiful brown skinned goddess, may not always walk the  straight and narrow, but when it counts she’s always got your back!

Michiko doesn’t let anything stand in her way, whether it’s maximum security prison or a group of hired thugs, you can bet she won’t go down without a fight! Sassy, street smart, and sexy, Mitchiko is the kind of woman men want and women want to be like… I’m not gonna lie, I started watching Michiko to Hatchin just to see this woman kick some ass and I was not disappointed!! 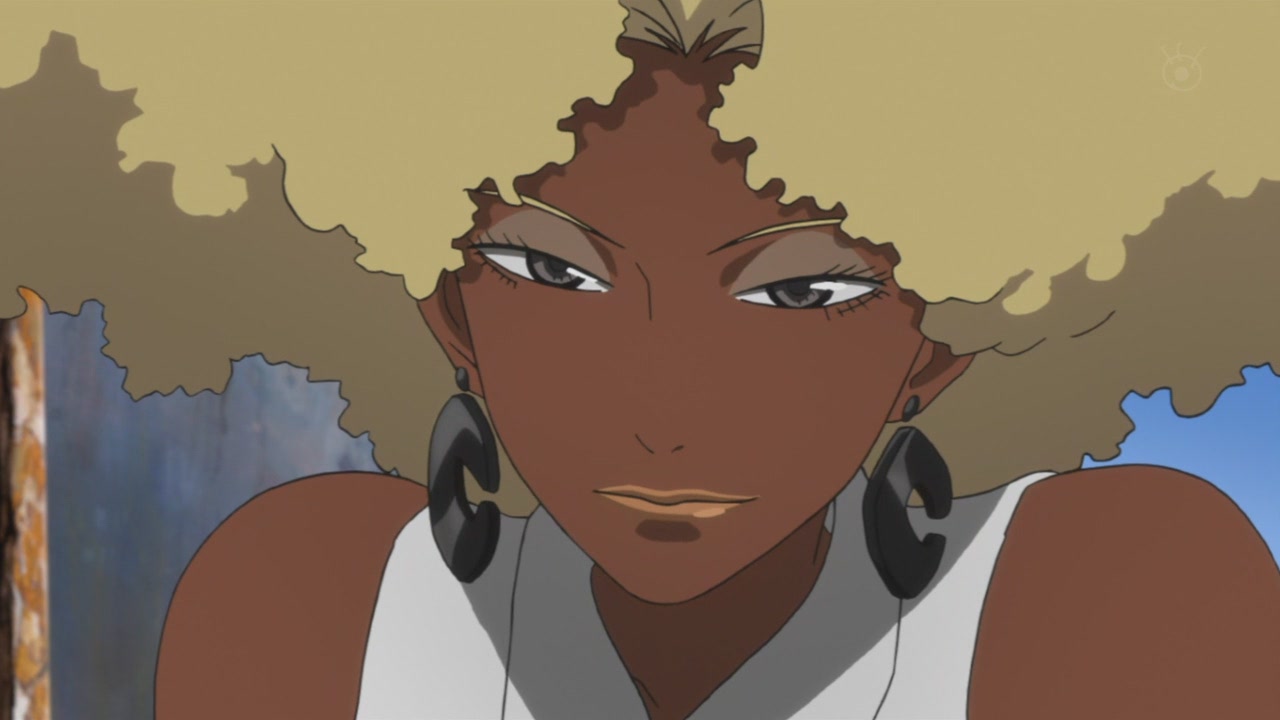 Oh, yeah, honorable mentions for Atsuko Jackson, who is a badass woman of color as well! Even though she’s a cop and more often than not ends up getting outsmarted by Michiko, Atsuko knows how to get down and dirty too!

I love it when female characters take on roles traditionally held by men, so when I saw this hot mama mechanic, I was over the moon! Now, I will admit that at first I was afraid that she’d be relegated to little more than fanservice fodder, and I’d be lying if I said that wasn’t the case in the beginning… I mean, she does have some rather large boobs… But, all of that aside, Miyuki is a badass character that more than holds her own.

Miyuki is a capable mechanic, whose skills are second to none, her innovative techniques have ensured victory for her team on numerous occasions. While she isn’t a Basquasher, like Dan, she’s still an essential member of the team and one of the coolest mechanics, ever!  She’s got both looks and brains, and she knows it, Miyuki is just a cut above the rest!

It’s been awhile since I last watched Bleach, but, I still remember how shocked I was when Yoruichi’s true form was revealed. Now, I wasn’t surprised to see a cat transform into a human being, Harry Potter had already prepared me for that and then some… No, what really got me was the fact that the previously male black cat, Yoruichi had not transformed into a man like I expected, but woman and not just any woman, but a badass brown skinned woman at that! Ya’ll it was the first time that I’d ever seen a character that looked like me in an anime…ever and it was mind blowing!!

I was used to seeing female characters taking a much more passive role in shows before, but Yoruichi, wasn’t like that at all. Like most of the characters in the show she is a capable fighter, who more than holds her own both on the battlefield and off and for me that in and of itself was a welcome surprise. But, seeing not just a woman, but a woman of color in such a prominent role in an anime really left a huge impression on me. She’s a badass fighter who gives as much as she takes and on top of that, she’s just so relatable. Yoruichi wasn’t a damsel in distress or overly “feminine” she did what she wanted, when she wanted and for that I just had to include her on this list!!