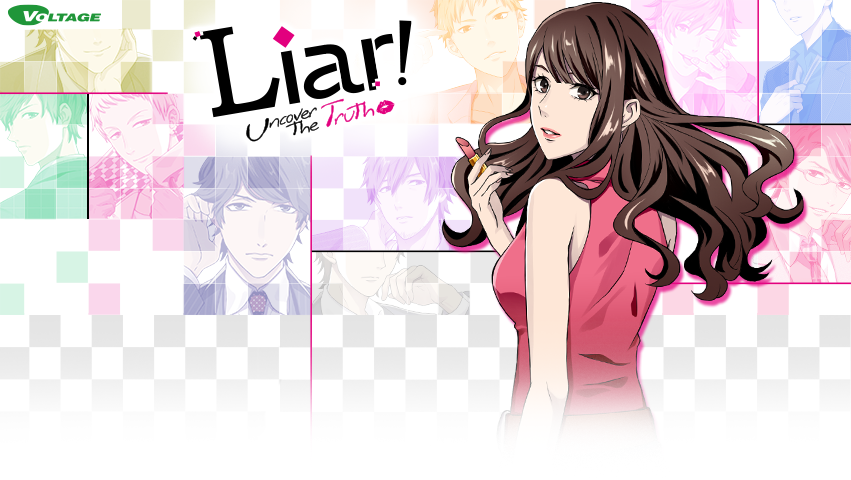 I wanted to respect Voltage’s wishes to keep spoilers to a minimum so I waited a bit, before doing individual character reviews… But, it’s been a few days and most of the folks who want to play the game have pretty much already started playing…  So I figured it was finally safe to start posting these… If you want a spoiler free review click, HERE, if not keep reading!  So first up is the 1st Liar, Shuto Matsuki!!

**Disclaimer: I DO NOT own any of the images used in this review, ALL images, screenshots, and characters belong to Voltage Inc. Please if you are interested in the game, download the game for free in the App Store or from Google Play and purchase the stories when they are available in your area. Also, this goes without saying, but this post will contain spoilers for Liar! Uncover the Truth. 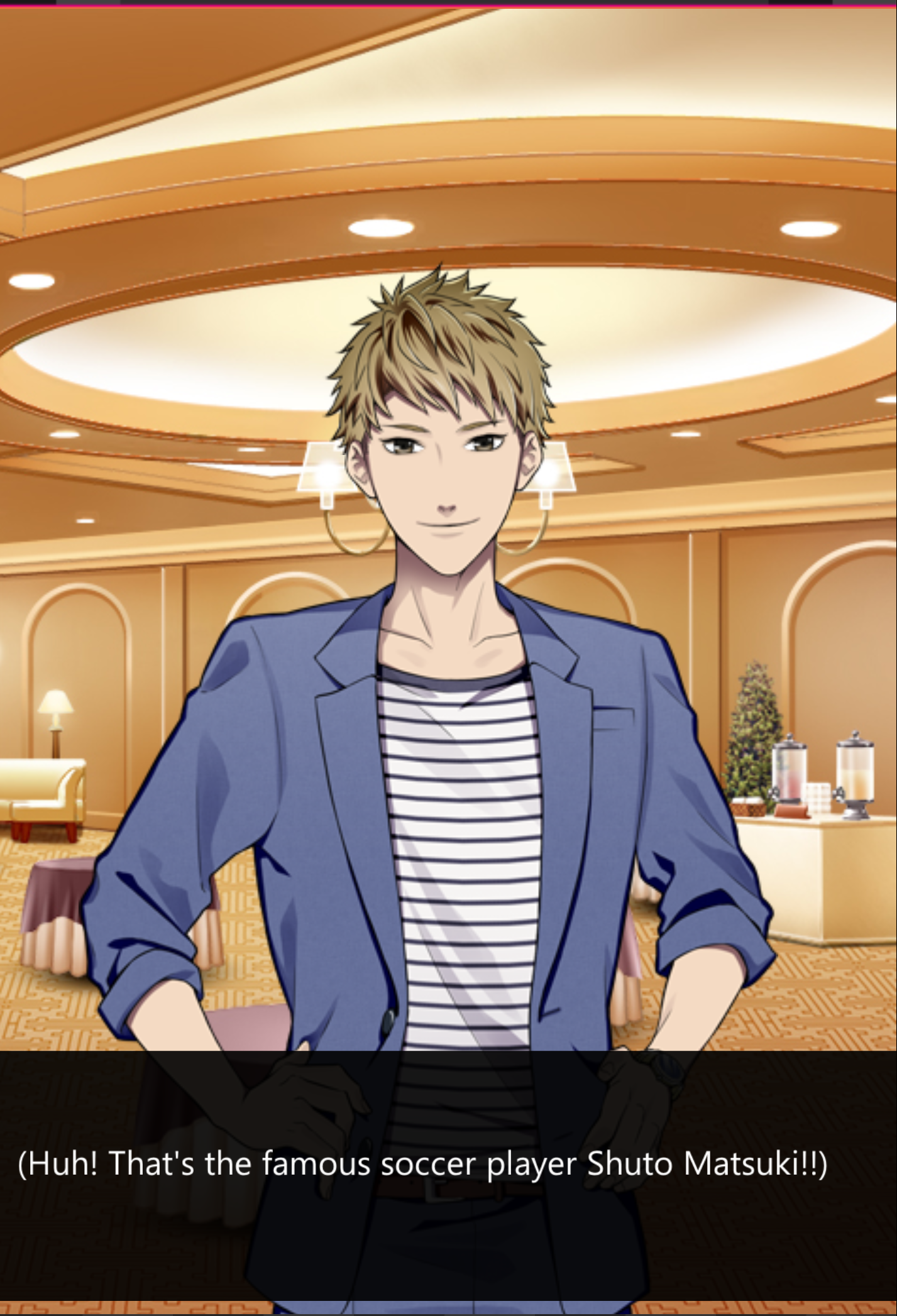 Shuto Matsuki is an internationally renowned soccer player and an all around nice guy. He’s never had a scandal and despite the fact that women probably throw themselves at his feet, he doesn’t play around with women. If he wasn’t a famous soccer player, with thousands of fans and millions of dollars in endorsements, you’d probably mistake him for a college student or something. Plus, he doesn’t really carry himself like a famous athlete.

When he isn’t on the field, he’s at home spending time with his family or playing video games. And boy does Shuto love his family… Confident and sweet, Shuto wastes no time staking his claim on our lovely MC. Within minutes of meeting her at the Matchmaking Party, Shuto has already popped the big question. But, the more time the MC spends with the power striker, the less perfect he becomes.

Falling in Love with the Lie… 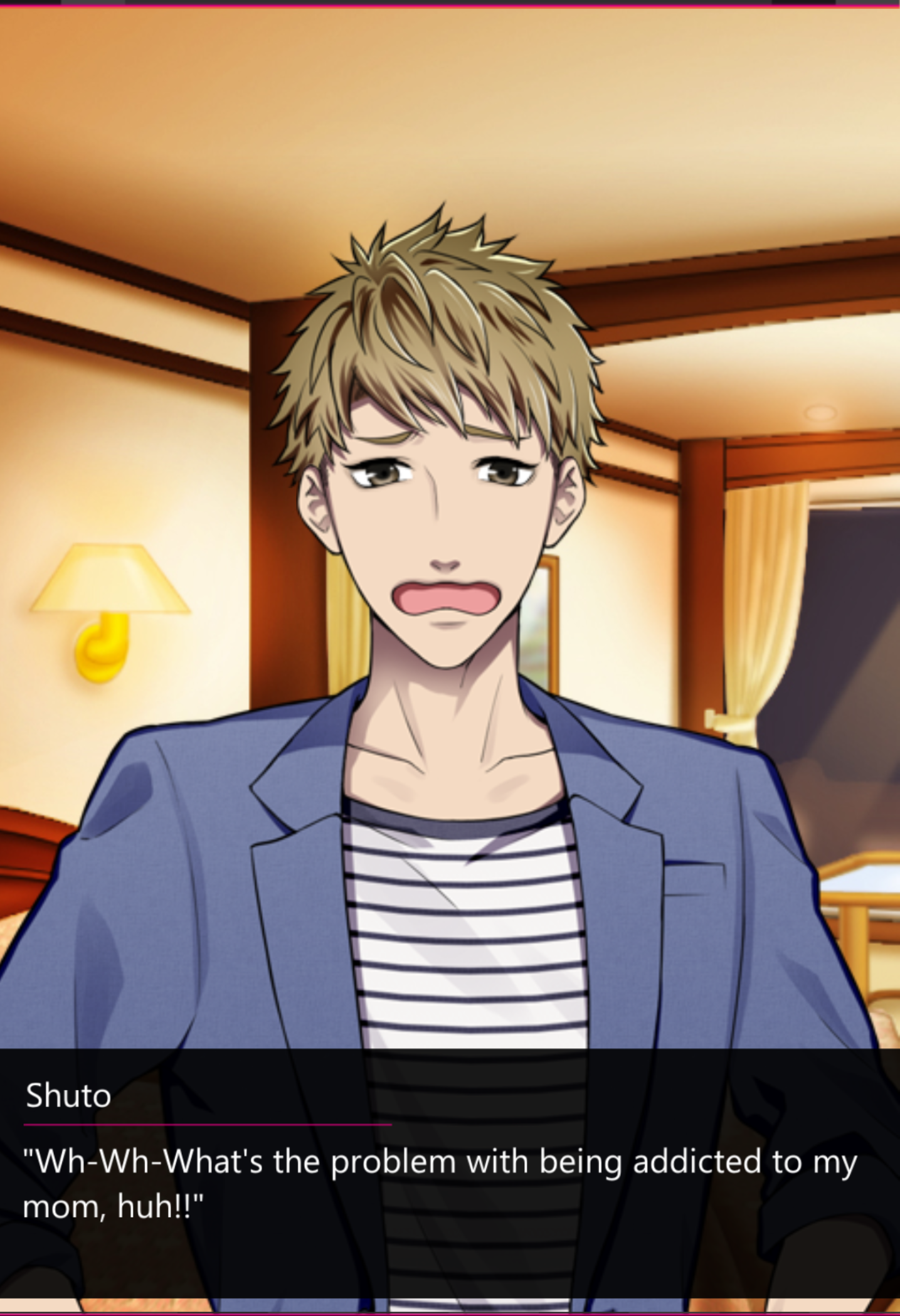 After chatting with Shuto at the Matchmaking Event, the MC agrees to meet up with him for a mini date. But, before they can really chat, Shuto receives an urgent phone call from his “manager” causing him to rush off to his hotel room. But, there’s something suspicious about the situation, so the MC does a little investigation of her own and what she uncovers made my skin crawl.

Underneath all of his many assets and charm points is a freakin’ mama’s boy! The relationship between Shuto and his mother, Mitchiko, would make even Oedipus and Jocasta cringe. First, I want to say that there is absolutely nothing wrong with a guy loving his parents, in fact it’s an excellent quality for any potential marriage partner. However, I draw the line at Mommy/Son bubble baths and late night Mommy/Son snuggle sessions.  NOPE, just nope! 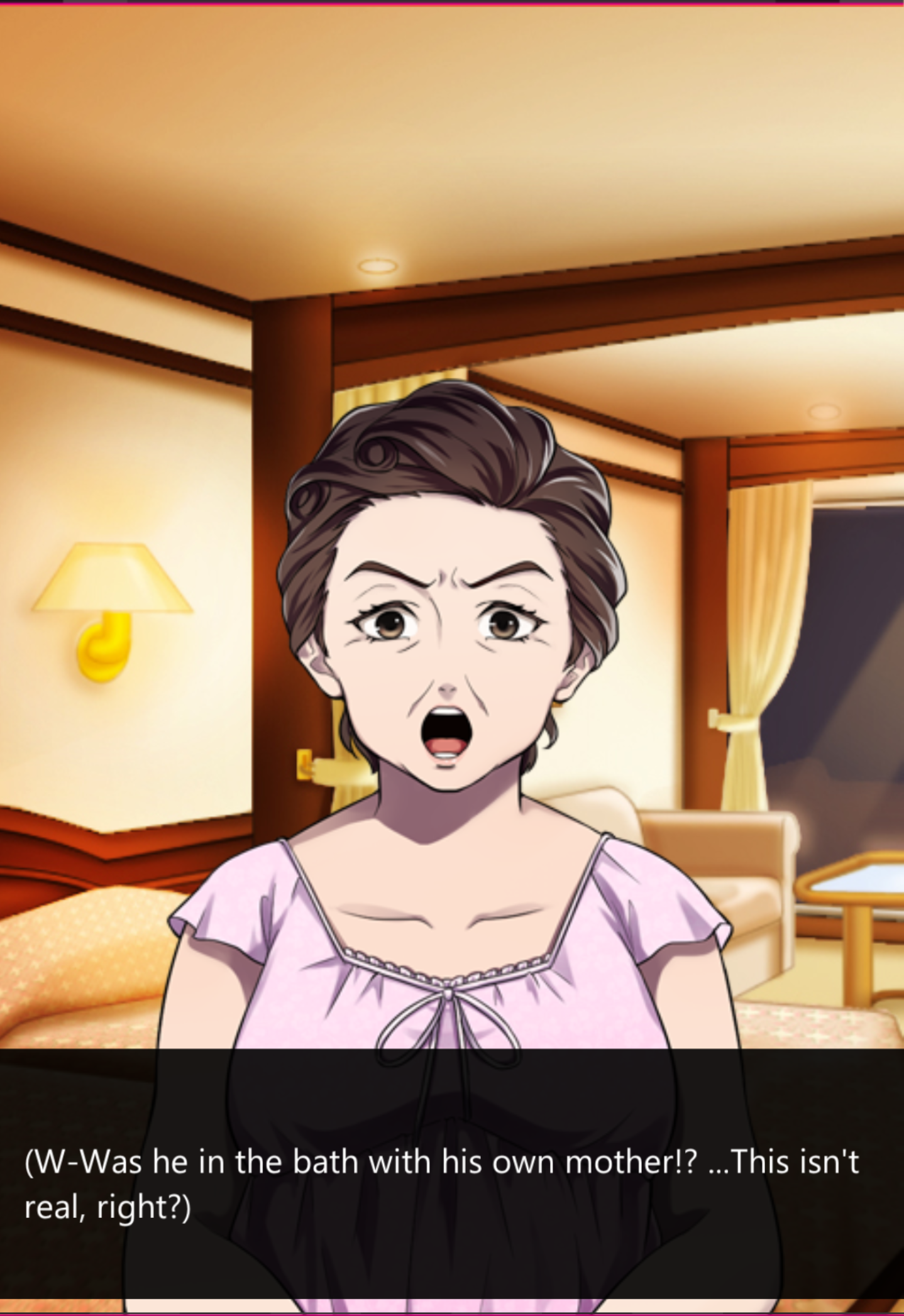 When Shuto’s mom walked out in that sheer pink negligee, I almost threw up in my mouth. WTF Voltage, there is a line between what is acceptable and what is not acceptable… and this whole arc smashed that line to bits! I didn’t know whether to laugh or cry while playing this Liar arc, because this was just plain creepy. But, I don’t know what’s worse, the fact that Shuto is an overgrown man child or the fact that he actually thought any self respecting woman would be okay with taking a bath with dear old mommy dearest!

The route then takes an even more bizarre turn when mommy’s special little boy tells the MC that he fell in love with her because she reminds him so much of his dear sweet mother. He then proposes to MC one final time and the MC answers with a spectacular soccer ball to the crotch!

In Shuto’s Bad End, Shuto promises to put some distance between himself and his mother, so the MC agrees to marry him. Soon after, Shuto is drafted by an Italian Soccer Club and the newlyweds move to Italy, but the MC’s mother in law from hell isn’t far behind…

The “Love at First Sight” Secret End, is a POV story that gives a bit of insight into Shuto’s thoughts when he sees the MC for the first time at the Matchmaking Event. In an attempt to distance himself from the constant stream of gold diggers, Shuto attends the Matchmaking Event to find someone unimpressed with his status and fame. But, just when he’s about to give up on finding the perfect woman, he spots the MC and from that point on he sets his sights on winning her heart.

In the “Day I Became a Mama’s Boy” True End, we take a peek into the past events that lead to Shuto becoming such a mama’s boy, and to be honest it’s kind of sweet. Shuto is a promising young soccer player who has always dreamed of being a soccer star, and with the love and support of his parents it seems like nothing will stand in his way! But, everything isn’t  quite so picture perfect in the Matsuki home, Shuto’s father is extremely strict with his family, but for some reason he always seems to direct his anger at his wife. So in order to protect his mother from his father’s ire, Shuto vows to always look after her no matter what.

The “My Sights Set on Your Heart” Love End, Shuto refuses to take the MC rejection laying down, but after the fiasco in the hotel room it’s going to take more than words to win her affection. In an act of good faith, Shuto attempts to destroy his lucky charm, a photo of his mother, in order to prove his love for the MC. Swayed by the gesture, the MC agrees to enter into a relationship with the soccer star!

Finally, in the “My Precious Shuto” Scumbag End, is a Michiko POV story, yes you read that right… Voltage decided to give us Mommy Michiko’s perspective.This ending was by far the most disturbing part of the entire arc; after getting dumped by the MC, Shuto is back to his old mama’s boy ways. In order soothe his broken heart, Shuto takes his mother out on a romantic Mother’s Day date.

I really have to give it to Voltage, they really outdid themselves with this route and this is just the first Liar! I can only imagine what the other shenanigans the other Liars have up their sleeves and I  can’t wait to see where this crazy train leads. The 1st Liar arc was both hilarious and a little cringe worthy, but I loved every minute of it. The writing was fun and the characters were interesting, so that’s always a plus. However there really wasn’t much in the way of romantic development between Shuto and the MC. Even after reading the Secret End, I still don’t feel like there was a love connection between the pair, if anything the most of the romance comes from Shuto and his mom… now that’s the real OTP of the 1st Liar arc! Don’t get me wrong, the relationship between Shuto and his mother is messed up, and I don’t care how Voltage tries to justify it… it just ain’t right!

But, the saving grace of the game so far is most definitely the MC! I know some of you guys don’t like her very much, but this is by far the most relatable MC Voltage has ever given us and I love her! She’s pretty, smart and spunky, her only flaw is that she attracts losers like flies to honey. But, that’s okay, she is more than capable at weeding out the truth!! Overall, despite the unsettling aspects of Shuto and his mother’s relationship, this is an interesting start to Liar! Uncover the Truth!!

What do you think about Voltage’s newest free app? Do you think Liar: Uncover the Truth will steal players away from Mystic Messenger?  Who do you think is the MC’s ideal match? Do you think you can weed out the liars? Let me know what you think in the comments section. If you like what you see, like this post or follow Nice Job Breaking It, Hero! As always THANK YOU FOR READING!!

8 thoughts on “That Guy is a Mama’s Boy: Liar! Uncover the Truth- 1st Liar”