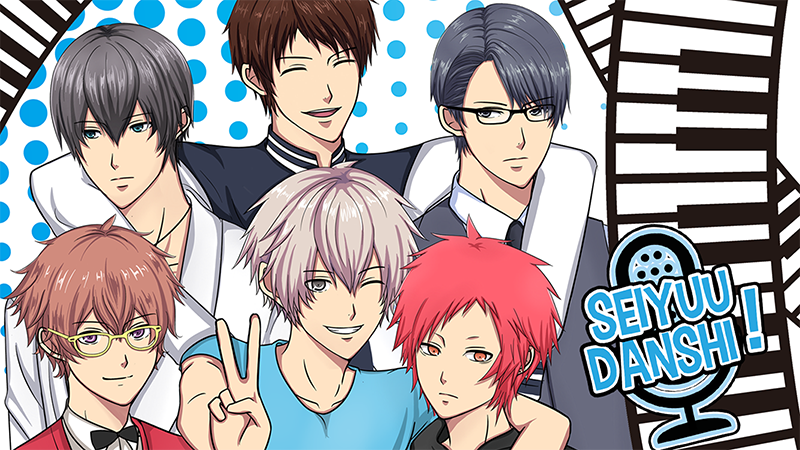 Edit: The Kickstarter for this game was successful at meeting its funding goal! Due to the outstanding Backer turn out, the game was able to meet more of the Stretch Goals than anticipated! However, this has caused the game to be delayed slightly from the original release date…The game now has a tentative release date of December 2017!

So this one is for all of my BL/Yaoi fans out there…In a world where good BL games are still few and far between comes the debut game from two sisters who just so happen to love BL/yaoi and games!  Seiyuu Danshi is an upcoming English BL visual novel by Meyaoi Games. The game will be 18+!

In the game you play as an up and coming seiyuu (voice actor) who has just run away from home. With nowhere to go and your job on the line, you vow to become a top notch voice actor and maybe find some love along the way. Currently there are five potential love interests, with possibility of one mystery character in the future.

This game boasts a lot of unique features that set it apart from traditional visual novels currently on the market.

This game met it’s $5,000 goal within 9 hours of the Kickstarter launch! Right now they are working on reaching the Stretch Goals (all of which sound super awesome)!

They even offer a download link for the Demo right there on the Kickstarter page, which covers the first 2 weeks of the game (it is awesome). So if you are still on the fence about the game or just want to see what the game has to offer give the demo a try.

So PLEASE check out the Kickstarter, HERE, and lend your support. There are only 25 more days left and they are currently at $20,613, every little bit helps! I’m planning on donating at the $20 level…I know it’s not much (I kinda quit my job right before Christmas) but I really do want to help out!

If you can’t help out monetarily, SHARE this post or the Kickstarter on social media and spread the word!